feeling that building a project in eclipse (including kinetis design studio ) takes a long time? then probably the ‘parallel build’ option is not enabled in your project: using parallel build option reduces the needed time by factors. to give an example, to build a project with 56 source files takes 32 seconds without parallel build enabled:

with parallel build enabled this gets reduced down to less than 10 seconds:

‘parallel builds’ means that the ‘builder’ or make file does not compile one file after each other, but instead spawns a set of parallel builds. this is especially useful for host machines having multiple cores or cpu: such as each cpu then could do a compilation and balance the build load across all available cpus to cut the build time.

to speed up the build time, go to the project settings. i can enable ‘parallel build’ in the ‘behaviour’ tab of the c/c++ build group: 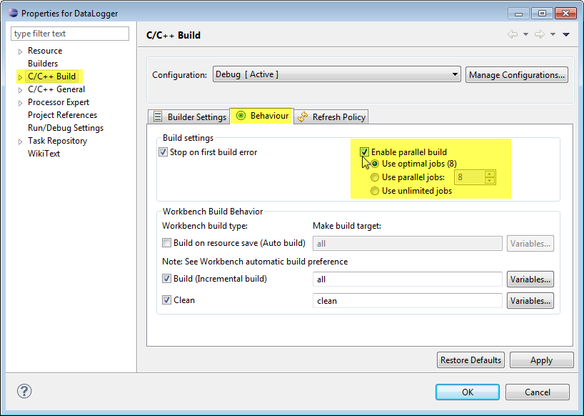 the improvement of course depends on the number of cores and speed of your machine. three to five times improvements are typical on my machine.