remember, we are running on an action scoped session, and this is the code that we run:

the error that we get is a problem when trying to serialize the blog. let us look again the the class diagram: 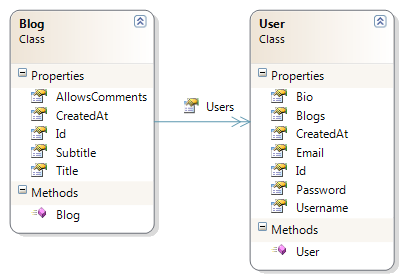 as you can see, we have a collection of users, but it is lazily loaded. when the json serializer (which i use instead of writing a view, since it makes my life easier) touches that property, it throws, because you cannot iterate on a lazily loaded collection when the session has already been closed.

one option that we have is to modify the code for blog like so:

i don’t like it for several reasons. first, and least among them, serialization duties aren’t one of the responsibilities of the domain model. next, and most important, is the problem that this approach is incredibly brittle. imagine what would happen if we added a new lazily loaded property. suddenly, unless we remembered to add [scriptignore] we would break everything that tried to serialize a blog instance.

i much rather use an approach that wouldn’t break if i breathed on it. like the following:

by projecting the values out into a known format, we can save a lot of pain down the road.

but wait a second, this looks quite familiar, doesn’t it? this is the view model pattern, but we arrived at it through an unusual journey.

i don’t really care if you are using anonymous objects or named classes with something like automapper, but i do think that a clear boundary make it easier to work with the application. and if you wonder why you need two models for the same data, the avoidance of accidental queries and the usage of the action scoped session is another motivator.