Choosing between the structured relational database model or the "unstructured" graph model is less and less an either-or proposition. For some organizations, the best approach is to process their graph data using standard relational operators, while others are better served by migrating their relational data to a graph model.

The most common scenario in which "unstructured" graph data coexists peaceably with relational schema is placement of graph content inside relational database tables. Alekh Jindal of the MIT Computer Science and Artificial Intelligence Laboratory (CSAIL) points out in a July 9, 2014, post on the Intel Science and Technology Center for Big Data blog that most graph data originates in an RDBMS.

Rather than extract the graph data from the RDBMS for import to a graph processing system, Jindal suggests applying the graph-analytics features of the relational database. When a graph is stored as a set of nodes and a set of edges in an RDBMS, built-in relational operators such as selection, projection, and join can be applied to capture node/edge access, neighborhood access, graph traversal, and other basic graph operations. Combining these basic operations makes possible more complex analytics.

Similarly, stored procedures can be used as driver programs to capture the iterative operations of graph algorithms. The downside of expressing graph analytics as SQL queries is the performance hit resulting from multiple self-joins on tables of nodes and edges. Query pipelining and other parallel-processing features of RDBMSs can be used to mitigate any resulting slowdowns.

When Jindal compared the performance of a column-oriented relational database and Apache Giraph on PageRank and ShortestPath, the former outperformed the latter in two graph-analytics datasets: one from LiveJournal with 4.8 million nodes and 68 million edges; and one from Twitter with 41 million nodes and 1.4 billion edges.

When Migrating Data From Relational to Graph Makes Sense

While there are many instances in which extending the relational model to accommodate graph data processing is the best option, there are others where a switch to the graph model is called for. One such case is the massive people database maintained by Whitepages, which resided for many years in siloed PostgreSQL, MySQL, and Oracle databases.

As explained in a November 12, 2014 post on Linkurious, Whitepages discovered that many of its business customers were using the directory to ask graph-like questions, primarily for fraud prevention. In particular, the businesses wanted to know whether a particular phone number was associated with a real person at a physical address, and what other phone numbers and addresses have been associated with a particular person.

The development team hired by Whitepages used the Titan scalable graph database to meet the company's need for scalability, availability, high performance (processing 30,000 vertices per second), and high ingest rate (greater than 200 updates per second). The resulting graph schema more accurately modeled the way Whitepages customers where querying the database: from location to location, and number to number. 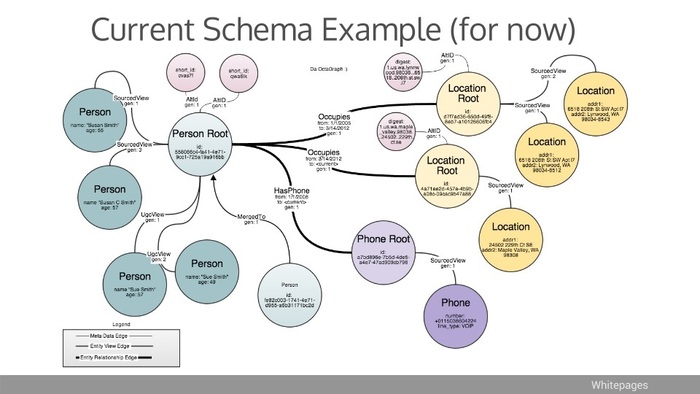 The Whitepages graph schema tracks people as they change physical address and telephone number, among other attributes. Source: Linkurious.

Whitepages has made its graph infrastructure available to the public via the WhitePages PRO API 2.0.

Whether you find your organization's data better suited to either the graph or relational model, the Morpheus Virtual Appliance will help you with real-time database and system operational insights. Get your MongoDB, MySQL, Elasticsearch, or Redis databases provisioned with a simple point-and-click interface, and manage SQL, NoSQL, and In-Memory databases across hybrid clouds.