TL; DR: A Remote Retrospective with a Distributed Team

We started this series on remote agile with looking into practices and tools, followed by exploring virtual Liberating Structures, how to master Zoom as well as common remote agile anti-patterns. This fifth article now dives into organizing a remote Retrospective with a distributed team: practices, tools, and lessons learned. 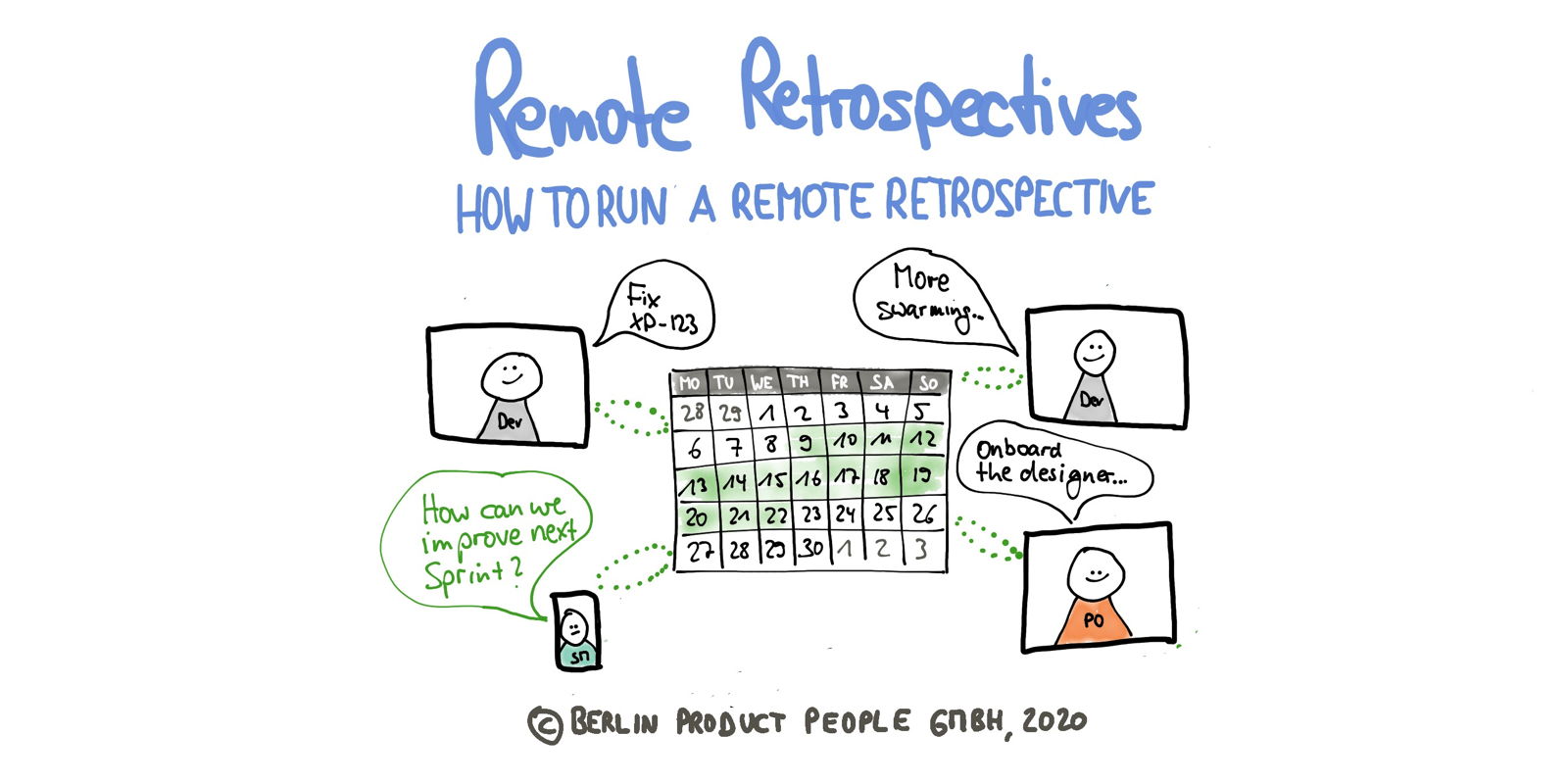 The Scrum Guide on the Sprint Retrospective

According to the Scrum Guide, the Sprint Retrospective serves the following purpose:

The purpose of the Sprint Retrospective is to:

The Scrum Master encourages the Scrum Team to improve, within the Scrum process framework, its development process and practices to make it more effective and enjoyable for the next Sprint. During each Sprint Retrospective, the Scrum Team plans ways to increase product quality by improving work processes or adapting the definition of “Done”, if appropriate and not in conflict with product or organizational standards.

This is a compelling pitch as it addresses the why, the what, and the how of the Retrospective. Moreover, there is no reason whatsoever to deviate from this guideline just because we are working in a remote setting.

The following suggestions on how to handle a remote Retrospective as the host, facilitator, or Scrum Master are based on two assumptions: a) we use Zoom as a video application as we need to work in breakout rooms, and b) our Retrospectives are modeled around Liberating Structures strings. (The latter does not rule out utilizing other techniques from the agile toolbox, and there are plenty of those available on Retromat or Tasty Cupcakes.)

The following LS microstructures refer to these basic patterns of virtual Liberating Structures.

The 5 Stages of a Retrospective

I modeled the following design of a remote Retrospective is after the five stages of Esther Derby and Diana Larsen’s book “Agile Retrospectives:”

I. Setting the Stage

There are numerous ways of gathering data for an upcoming Retrospective. Probably, you want to track quantitative metrics like cycle-time or the number of bugs that escaped to production. Or you might be interested in qualitative metrics such as team-health or the sentiment of the team members. The point is that concerning the data, it does not matter whether the Scrum team runs the analysis in a face-to-face or remote setting: Both environments provide access to the same data. Typical practices of gathering data for Retrospectives are:

III. Generate Insight from the Data

After collecting the data, making sense of it is next. The following three LS microstructures have proven to be useful, also in a remote setting:

IV. Deciding What to Do

The next step of the remote Retrospective is to agree on improvement items that will allow the team to grow and become more mature. Four Liberating Structures microstructures well-suited for this purpose:

The last step of the Retrospective sequence is the closing or check-out. Basically, it is a mini-retrospective within the “large” remote Retrospective focused on reflecting on what has happened as well as providing feedback: Was the time well-spent or do we need to change our approach to running a remote Retrospective next time? To entice this kind of feedback, keeping the process short and simple is paramount. Although we do not pass a door while leaving the meeting room, there are many ways to collecting the feedback of the team members:

Two Liberating Structures can support a remote Retrospective with a larger team: 1-2-4-All and Shift & Share:

Applications to Run a Remote Retrospective

Of course, instead of tailoring a string of Liberating Structures to host a remote Retrospective, there are other options:

Good Practices for a Remote Retrospective

From the list of all practices that generally apply to remote agile events, see Remote Agile (Part 1): Practices & Tools for Scrum Masters, Agile Coaches, and Product Owners, I want to point at three practices that make hosting significantly easier:

Working as a distributed agile team is, in many aspects, more difficult than being co-located: ‘Reading the room’ is significantly more complicated, for example, and communication is taking a toll as the beloved informal meeting at the coffee machine is no longer happening. However, being suddenly distributed does not mean that we cannot have useful critical events anymore. On the contrary: The necessity to invest more preparatory work upfront may provide a chance to improving the meaning of events, and I would consider the remote Retrospective to be a prime candidate for that purpose.

What kind of remote agile Retrospective have you organized? Please share it with us in the comments.