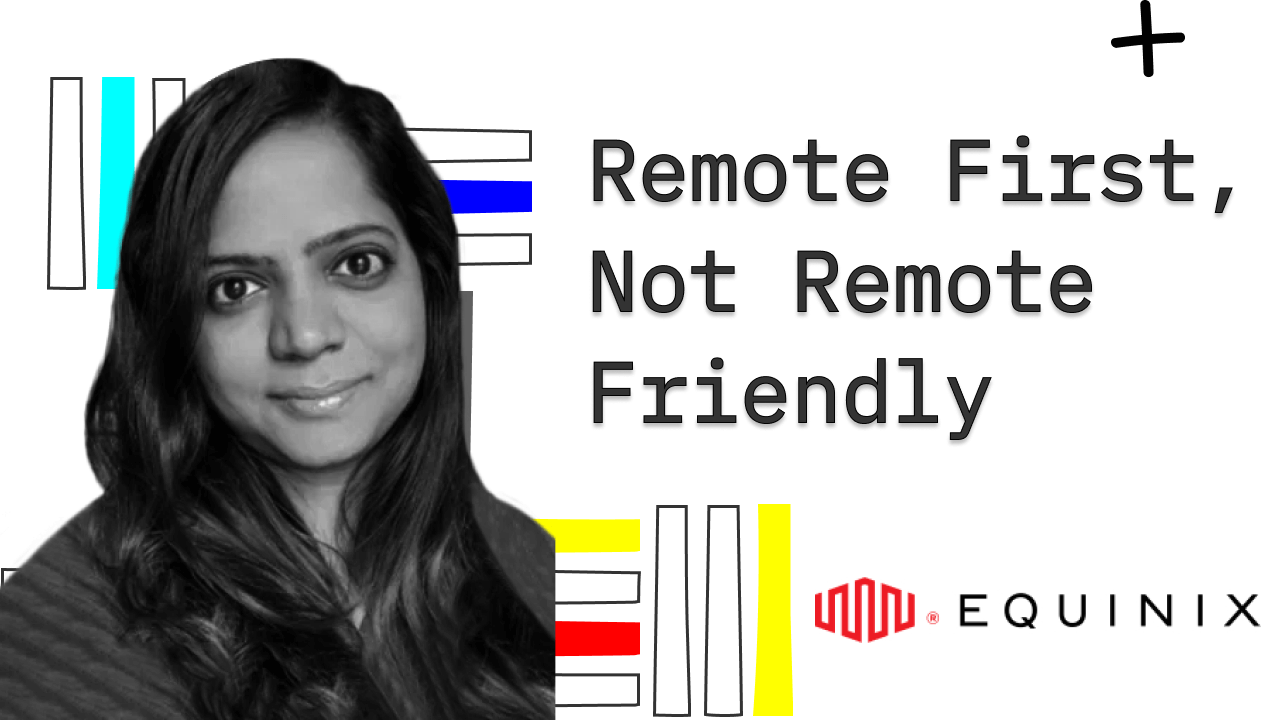 Shweta Saraf, the Senior Director of Engineering at Equinix, has a unique remote work story: she experienced a fully remote acquisition during the pandemic.

Her former employer - Packet - was acquired by Equinix, a huge company with more than 30,000 employees and over 200 locations around the world. Suddenly, the small team at Packet who were experts at remote work found themselves in the position of trying to onboard not just themselves at a new company, but onboard an organization of 30,000+ to the principles, structure, and best practices of a fully remote work environment.

Because Equinix is the largest data center company in the world, operating data centers and office hubs all over the globe, the switch to remote work had to be as seamless and efficient as possible.

One of the key areas Equinix first looked to be efficient was in their meeting practices. They began what they refer to as ‘Better Way Wednesdays’ (their name for a best practice also utilized by Shopify) as a way to better inform employees and leadership. These meetings paired with a monthly business memo, capture the state of business along with key achievements, challenges or blockers, and give senior leaders KPIs and metrics.

This practice made it possible to cut down on the number of weekly status meetings, where the same information is passed on in different formats or through different levels of abstraction. The investment in this practice paid off immediately.

Teams found that the “Better Way’ meetings would often only take an hour, but would save tons of time across the board. It also had the added benefit of reducing zoom fatigue. More focus time and better communication were realized by a single meeting shift.

The biggest focus Equinix implemented was asynchronous communication, because of the many time zones involved and the number of people all over the world, including engineering teams. Rather than restrict productivity to a specific set of time zones, async communication gives employees the agency to be held accountable for completing their work on their own time.

Meaning that it is no longer necessary to align employees on separate continents onto the same Zoom call if that information can be transcribed in a chat app.

However, for companies where office culture is strong, with ceremonies happening in-office, it can be a learning process to adapt to working completely remote. With Packet’s experience aiding the transition for Equinix, a cross-synergy of ideas was realized.

Employees from both companies found themselves questioning former agile ceremonies, such as stand-ups and retros, and whether these can be done asynchronously, or if they require a meeting at all. The merger resulted in an easier working environment for everyone.

Equinix, a company of tens of thousands of employees and hundreds of locations, transitioned to remote work successfully during the pandemic not because they were remote-friendly, but because they adopted a mindset of remote-first. Meaning that a developer on the other side of the globe could participate meaningfully and not feel left out.

While not every company underwent an acquisition during the pandemic, Equinix's journey to a fully-remote organization is a familiar story for many tech companies this year.  To learn more about Equinix and how other companies transitioned to remote work, check out Dev Interrupted's Remote Work Panel on August 11, from 9-10am PST.

Getting to a point where it is easy to get people on board with the concept of an acquisition while working fully remote has been an interesting challenge.

Typically, in a traditional office environment, an acquisition would be announced to employees at an “all-hands” meeting where any questions or concerns could be addressed all at the same time. However, that has proven to be impossible with so many people working remotely.

Instead, it is necessary to simply let employees know that they are being acquired and try to do the best that the company can while making this announcement over Zoom or some other video platform.

Some employees find it challenging to speak up and ask the questions that they want to ask when they are faced with having to do so over a video chat. They may feel uncomfortable bringing up pressing issues at the company, and it is even possible that they will feel pressured to simply conform and go along with what the rest of the group has stated up to this point.

As such, it is a good idea to try to speak with everyone and get them all on the same page ahead of time as much as possible. Companies are advised to have extensive documents that can educate employees about the changes that are arriving, and to make sure that the most pressing concerns are addressed right from the start. Doing this can make an awkward transition period a little less challenging to go through.

Interested in learning more about how to implement remote work best practices at your organization?

Join us tomorrow, August 11, from 9am-10am PST for a panel discussion with some of tech’s foremost remote work experts. This amazing lineup features:

Dan Lines, COO of LinearB, will be moderating a discussion with our guests on how they lead their teams remotely, how the current workplace is changing, and what's next as the pandemic continues to change

Don't miss the event afterparty hosted in discord from 10-10:30am with event speakers Chris and Shweta, as well as LinearB team members Dan Lines and Conor Bronsdon.

If you haven't already joined the best developer discord out there, WYD?

Look, I know we talk about it a lot but we love our developer discord community. With over 1500 members, the Dev Interrupted Discord Community is the best place for Engineering Leaders to engage in daily conversation. No salespeople allowed.