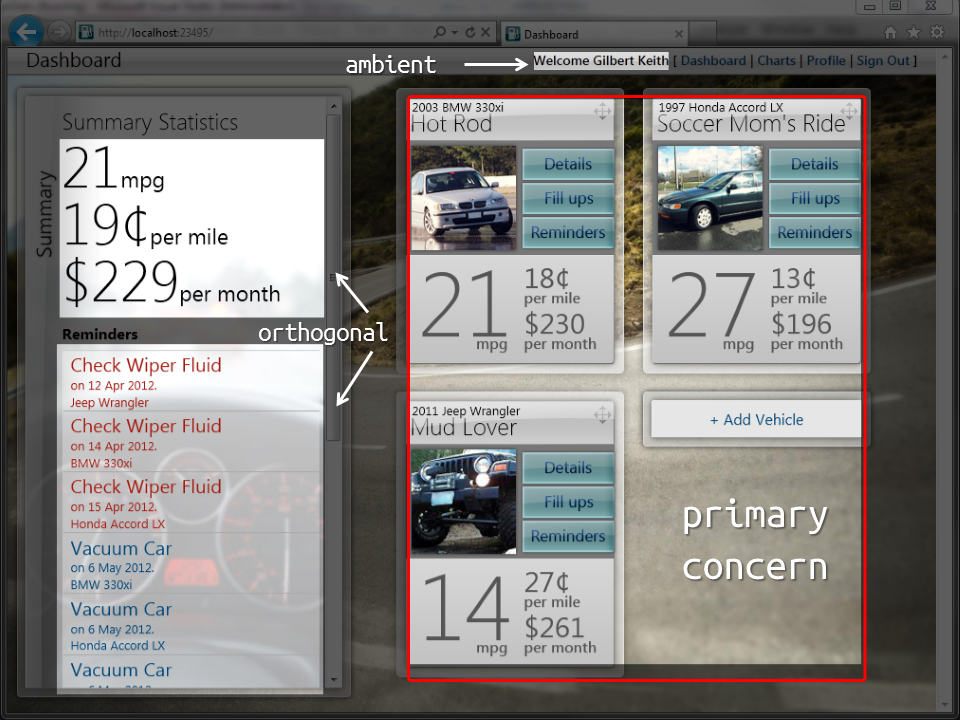 the primary concern of the page is displaying a list of vehicles. however it also displays some statistics and a set of reminders. i labeled the stats and reminders as orthogonal because they are (in a sense) independent of the primary concern. finally, there is the ambient data of the currently logged in user. i call this data ambient because we expect it to be present on all the pages in the application.

it’s a common practice in mvc-style applications to map a single controller action to a view. that is, it is the responsibility of a single action to produce everything that is needed to render a particular web page.

the difficulty with this approach is that other pages often need to render the same orthogonal data. let’s examine the code for the action invoked by \vehicle\list.

disregarding how you might feel about the using<t> method to invoke commands and other such details, i want you to focus on the fact that the controller is composing a model. we generate a number of smaller viewmodels and then compose them into an instance of dashboardviewmodel. the class dashboardviewmodel only exists to tie together the four, otherwise independent data.

personally, i prefer to avoid classes like dashboardviewmodel and simply rely on dynamic typing in the view. however, others feel strongly about having intellisense support in the view.

project silk had separate actions just to serve up json:

you’ll notice that both jsonlist and list use the same getvehiclelistforuser command for retrieving their data. jsonlist also projected the data to a slightly different viewmodel.

first, we needed to eliminate the differences between the json viewmodel and the html viewmodel. without going deep into details, this wasn’t hard to do. in fact, it revealed that we had some presentation logic in the view that should not have been there. the real problem was that i wanted the action to look more like this:

only, the view still needed the additional data of statistics and reminders. how should the view get it?

we decided to use renderaction . renderaction allows a view to invoke another action and render the results into the current view.

we needed to break out the other concerns into their own actions. for the sake of example, we’ll assume they are both on the vehiclecontroller and named reminders and statistics. each of these action would be responsible for getting a focused set of data. then in the (imaginary) view for list we could invoke the actions like so:

note that each action has it’s on associated view.

the value of using renderaction is that we where able to create very simple actions on our controllers. we were also able to reuse the actions for rendering both markup and json.

a secondary benefit is the separation of concerns. for example, because we moved the responsibility of composition from the controller into the view, a designer could now revise the view for the \vehicle\list without needing to touch the code. they could remove any of the orthogonal concerns or even add new ones without introducing any breaking changes.

there are a few caveats with this approach.

first, don’t confuse renderaction with renderpartial . renderaction is for invoking a completely independent action, with its own view and model. renderpartial is simply for renders a view based on a model passed to it (generally derived from the main viewmodel).

secondly, avoid using renderaction to render a form. it’s likely won’t work the way you’d expect.this means that any form rendering will need to occur in your primary view.

thirdly, using renderaction breaks the model-view-controller pattern. what i mean is that, in mvc, it’s assumed that the view does nothing more than render a model. controllers invoke a view, and not vice versa. using renderaction breaks this rule. personally, i have no problem breaking the rule when it results in code that is more simple and more easily maintained. isn’t that the whole point of best practices anyway?