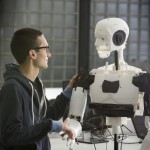 As regular readers of this blog will attest, I’m not a big fan of attempts to predict the semi-distant future, as the number of variables makes such an effort pretty futile.

So I’m in two minds about a recent attempt to do just that by a Stanford led project called the One Hundred Year Study on Artificial Intelligence (AI100).

They have recently produced a report that looks ahead to 2030 to see how AI might impact urban life, and I’m happy to recommend it as it is more of a discussion starter than a prediction of how things will be.

“We believe specialized AI applications will become both increasingly common and more useful by 2030, improving our economy and quality of life,” the team say. “But this technology will also create profound challenges, affecting jobs and incomes and other issues that we should begin addressing now to ensure that the benefits of AI are broadly shared.”

The Changing Face of AI

The group, which was formed in 2014, consists of a number of experts who aim to produce regular reports on various aspects of AI, with this report marking their first step on that journey.

They break things down into eight areas where they believe AI will have a particular impact, including application areas and the impact the technology might have on society.  Those eight areas are:

As you can see, none of the things mentioned in the report are likely to be news to regular readers of this blog, but it does nonetheless provide valuable evidence to remind us of the possible changes afoot.

It also reminds us of the need to have a joined up approach to managing these changes, which is something that’s largely lacking at the moment.

“Currently in the United States, at least sixteen separate agencies govern sectors of the economy related to AI technologies,” the report says. “Who is responsible when a self-driven car crashes or an intelligent medical device fails? How can AI applications be prevented from [being used for] racial discrimination or financial cheating?”

This kind of conversation is well worth having, and so the report acts as a good prompt to begin.  Check it out via the link above.

Enterprise Tech in 2018: Looking Toward AI, ML, and Digital Assistants