i’m generally a bit skeptical about most attempts to gaze into the future, as evidence of success in these endeavors are generally quite thin on the ground.  indeed, many predictions of the future look quite foolish when that ‘future’ actually comes around.

alas, that doesn’t stop people from trying, and indeed there is a whole lot of talk and discussion around just how the future of work will evolve over the coming years.

the latest such effort is a collaborative report produced by cbre and genesis, which looks at how work will look in 2030.

fast forward 2030: the future of work and the workplace asked a few hundred business folks, young people and indeed the odd expert their views on how things are shifting.  the sample consisted of people from across asia, europe and north america, so i do wonder just how representative the sample really was.

anyhow, the report asked participants to identify what they thought were the major game changers on the horizon for work in the future.  it identified a number of trends, the foremost amongst them were:

what will offer competitive advantage in 2030?

the report also looked at how organizations can differentiate themselves in the labor market by 2030.  as you can imagine, a number of answers came back, but a clear top 10 emerged. 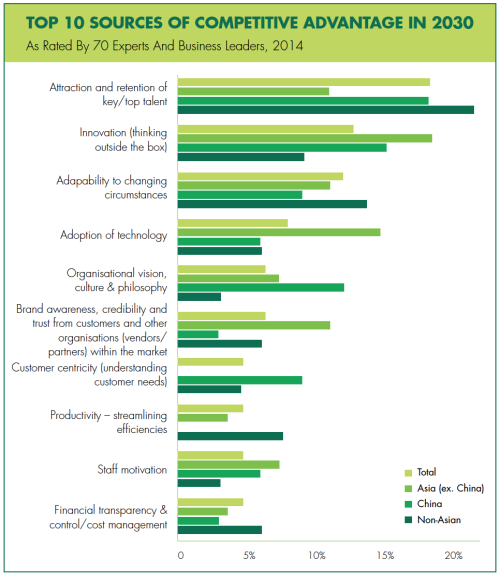 there are some predictable entries there, and whilst it’s pleasing to see innovation placed highly on the list, it’s a bit worrying that the language still seems fixed on new ideas rather than implementation of those ideas.

respondents did believe however that the top workplaces of the future will have a culture of constant micro-innovation, by which i hope they mean one of experimentation.

the report is interesting in that they do at least try and provide a global perspective to how work might change in the coming years, but as with so many predictions of this nature, they have inevitably placed far more weight on the current and how that may evolve.

evidence suggests that all manner of things will emerge in the coming years that we haven’t even thought about now.  i mean how many predictions were there for the sharing economy when the dot com bubble was in full flow back in 2000?

it was arguably the geographic breakdown of the results that provided the most interesting information therefore.  it emerged that young people from cities such as shanghai and beijing were far more up for change than their peers in new york and london.

whether that’s because those in chinese organizations still have further to go is something that isn’t explored.  just as with most predictions of the future, i doubt anyone will bother to revisit this report in 2030 to see just how accurate it was, so i have to question how valuable it is as a predictive exercise.

what it does provide however is a glimpse into the mind of younger workers today and the kind of things they personally find valuable in an employer.  that is an insight we can all heed.