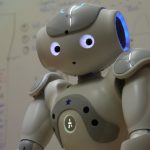 i've written previously about the increasingly potent way that robots are able to collaborate and work together. as you might expect, most of this work is coordinated via formal communication.

that may be soon about to change, however, as a swedish team from kth royal institute of technology have developed machines capable of cooperating with one another based upon nothing but body language.

they have developed a way for the robots to read the body language of others and come to their aid if they need assistance.

"robots can stop what they’re doing and go over to assist another robot which has asked for help," they say. "this will mean flexible and dynamic robots that act much more like humans — robots capable of constantly facing new choices and that are competent enough to make decisions."

the researchers believe that as robots take on more and more responsibilities, it's inevitable that they will have to collaborate with other machines, whether that's in the home or the factory.

the eu-backed project, which received support from researchers from finland, greece, and france, showcased their work in a number of demonstrations using off-the-shelf robots, including the nao. the researchers say that the ability to collaborate is largely down to the perceptions of each robot.

"the visual feedback that the robots receive is translated into the same symbol for the same object," they say. "with updated vision technology, they can understand that one object is the same from different angles. that is translated to the same symbol one layer up to the decision-making — that it is a thing of interest that we need to transport or not. in other words, they have perceptual agreement.”

for instance, in one demonstration, a pair of robots are carrying an object between them, with one of the robots leading the other. the second robot is capable of detecting what the 'leader' wants by the force it's exerting onto the object. it's designed to operate in the same subtle ways humans work.

whilst this is something that humans perhaps take for granted, it's a very useful skill for robots to have developed, and not one that they were capable of up until now.

it's achieved courtesy of a new communication protocol that allows the robots to talk to one another in a symbolic way, which the researchers suggest makes it very efficient as it minimizes communication levels. indeed, help can be requested and received in a single shot.

it's certainly a fascinating project, and one that hints at the growing capabilities of robots to work effectively together.