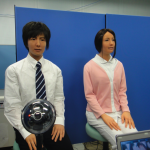 as robots have taken on more personal interactions with people, there has been a growing exploration of just how human-robot relations might unfold. whilst there have been some more sensible studies, such as one exploring how the elderly feel about having a robot carer, there have also been some rather more peculiar studies, such as a recent one exploring how we feel when we touch ‘intimate’ parts of a robot.

mostly, however, attempts have been somewhere in between.  a recent study by researchers at penn state looked at the issue of robotic personalities and, in particular, the gender that we assign to robots.

whilst the idea of genitalia on robots might seem bizarre, the paper suggests that the use of facial screens can allow robots to rapidly switch genders without having to change any of their core design.

all it takes to go from ‘male’ to ‘female’ is the introduction of more feminine cues on the screen of the robot.  the authors believe that the findings might help integrate robots in particular settings, such as giving people ‘female’ carers.

"we changed the gender cues—male or female—on two different locations: the robot body and the robot’s screen," the authors say. "the screen, by itself, helped participants perceive whether the robot was male or female."

it sounds a little strange, but i’ve covered previous research highlighting the emotional bond we can develop with robots, and as designs become more anthropomorphic it is likely to be a bond that will only strengthen.

this is kind of where the paper struggles, in that whilst on the one hand robots are becoming more life-like, the paper focuses primarily on switching the gender of the machine based upon a very un-humanlike screen.

even machines that lack this anthropomorphic quality, however, seem to get assigned a gender by humans that work with them.  for instance, when no evident gender exists, it seems we default to thinking of the machine as male.  this coincided with believing the machine to be more human-like and more animated.

“the default assumption, at least based on our results, is that robots are typically perceived as male,” the authors continue. “one of the big challenges, then, is, how can we change the perceived gender of robots for people who prefer to interact with a female robot without changing the actual body of the machine? our results show that changes to the screen of the robot are one promising possibility.”

suffice to say, there are other characteristics of the robot that can be tweaked aside from its gender. for instance, it might be given a different appearance for different roles, or even have its ethnicity or age altered.

it does sound a bit peculiar but provides an interesting angle on what is likely to be an increasingly common issue as we come face to face with robots in more areas of our daily lives.