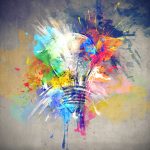 algorithmic creativity is a topic i’ve touched on a few times in the past year or so as a number of projects have emerged that appear to show computers being creative.

for instance, researchers have developed machines capable of creating jazz music or passable jokes .  there have been attempts to automate the creative process of writing a speech and editing videos .

a japanese marketing agency have even developed an algorithm to support their various creative projects.  what all of these projects have in common is that they aren’t really applying independent thought so much as they are mining huge databases of similar ventures to come up with a passable and logical next step.

so it’s interesting to read a recent study by researchers from the university of kent that attempts to get more to the heart of what might be regarded as computational creativity.

they went back to square one and tried to establish a clearer definition of just what creativity is and what it looks like.  they reason that only with this knowledge can we begin to craft machines that can be regarded as creative.

they propose a new model of how creativity emerges that is based largely on the language we use when describing it.  they use language analysis software to spot creative words, before then grouping them together into clusters that can be regarded as components of creativity.

the authors discovered 14 of these clusters, which were then used to judge the creativity of computational systems.  they hope that the work will help others in their own efforts to develop more creative machines, whilst also providing a relatively quick and easy way of rating the creativity of machines.

you can see a bit more about the project in the lecture below.