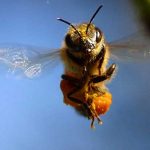 bees have been a popular topic of study for sometime due to their social nature and ability to develop complex social structures with little of the command and control hierarchy so common in human societies.

interestingly, researchers from the university of sheffield believe that greater understanding of bees could also herald a breakthrough in the development of autonomous robots.

a paper , recently published in plos , explores the creation of a computer model to explore how bees avoid hitting walls.  the team looked at understanding the visual capabilities of the bees that enable them to understand movement around them and thus avoid bumping into things.

it’s believed that bees control their flight using the speed of motion of the world around them. whilst this is largely understood, what’s less well understood is just how they achieve this, especially as the bee brain is believed to be only capable of understanding direction of motion rather than its speed.

the new study suggests that these motion detecting circuits in the brain can be joined together to also detect motion-speed, which is thus a crucial aspect of controlling how the bee flies.

“honeybees are excellent navigators and explorers, using vision extensively in these tasks, despite having a brain of only one million neurons,” the authors say.

so how does this impact robotics?  well, the researchers believe it’s a crucial step towards better development of algorithms for both navigation and routing, both of which are crucial in the development of autonomous flying machines.

the next step is to build upon these findings and explore how bees manage to know the direction they’re currently pointing in, and subsequently use this information when they’re completing tasks.

it’s an interesting approach that’s worth following in more detail.  to get you started, check out the video below.