Why Do We Have Git Conflicts? 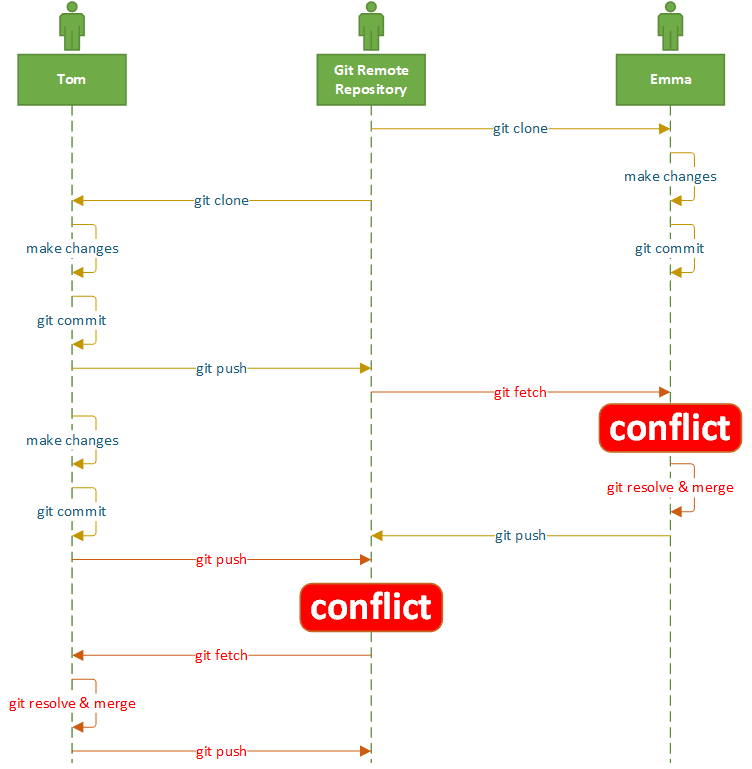 Let’s consider the following situation: Tom and Emma are working on the same test case in a test project. Emma added a new comment (“EMMA ADDED THIS COMMENT”), then committed and pushed the change to the Git remote repository.

At almost the same time, Tom also added a new comment (“TOM ADDED THIS COMMENT”), then committed and tried to push to the Git remote repository.

What should Tom do to push his change to the Git remote control?

First, Tom has to “pull” the code from the Git remote repository to his local machine.

Obviously, Tom will see a message about the conflict: 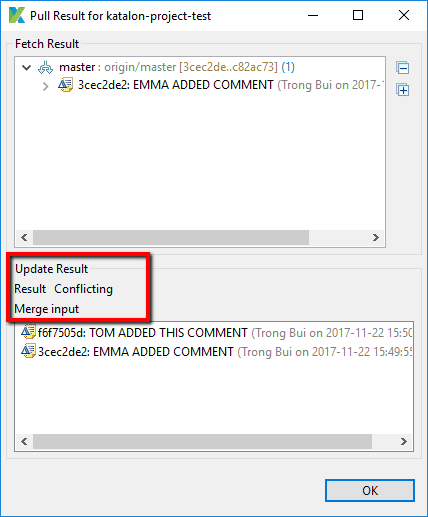 In the “Script” mode of the test case “TC2_Verify Successful Appointment” in Tom’s Katalon Studio project, there are errors with indicators such as “<<<<<<<” (convention from Git). Let’s look at the script more carefully:

Now Tom has to decide which change is correct, or both are correct or wrong. Tom has to replace these lines of code by the correct one, e.g. “THIS IS THE CORRECT COMMENT”:

After resolving the conflict, Tom is now able to commit and push the change to the Git remote repository.

In order to minimize the conflict in a team having more than one members, you should define a process from the very beginning so that all team members are on the same page when using Git. Here are some suggestions for good practices:

Git is a very powerful system for source version control, so if you have more than one member on your Katalon Studio project, you may consider using Git as a remote repository for your testing project. The content below provides several typical workflows for working with Git using Katalon Studio. Each workflow is presented via a diagram with each activity being taken from either Katalon Studio, Git, or Local Repository.

The activities involve performing one or more commands on Katalon Studio and Git:

Below are some good practices in using Katalon Studio integration with Git.

Below is a recommended workflow for starting a new Katalon Studio project and integrating with Git. The main activities in this workflow include Katalon Studio Registration, enabling Git integration, creating a Git repository, and cloning the project to Katalon Studio.

In case you have an existing Katalon Studio project and you want to add it to a Git repository and share it with team members, you can apply the following workflow. This workflow involves Commit and Push changes to Git. 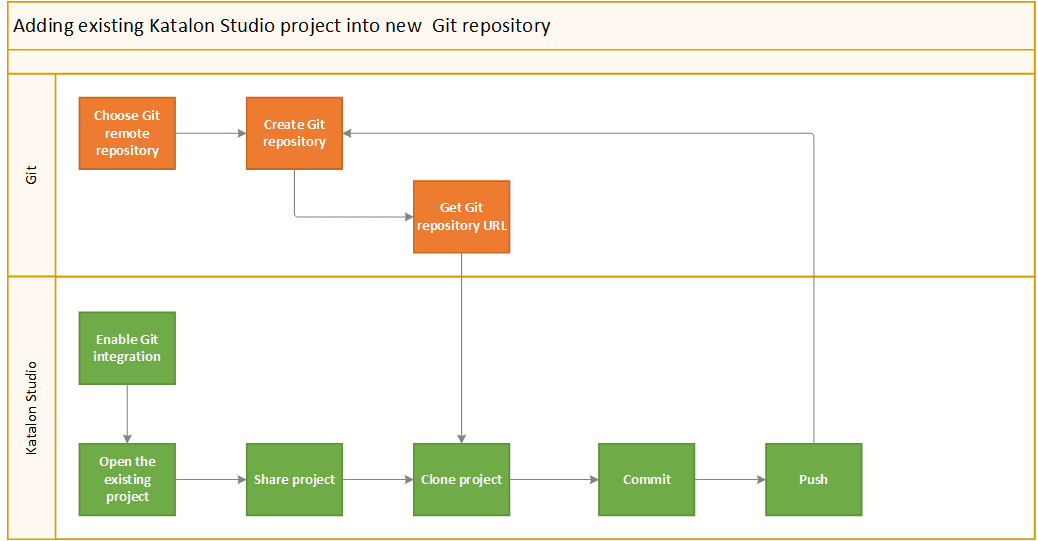 Very often, we have a Git repository from the development team for storing production code. The QA/tester team is required to save automation test scripts into this repository under a "test" folder.

You can apply the following steps to start a new Katalon Studio project and integrate it with the existing Git repository from the development team: 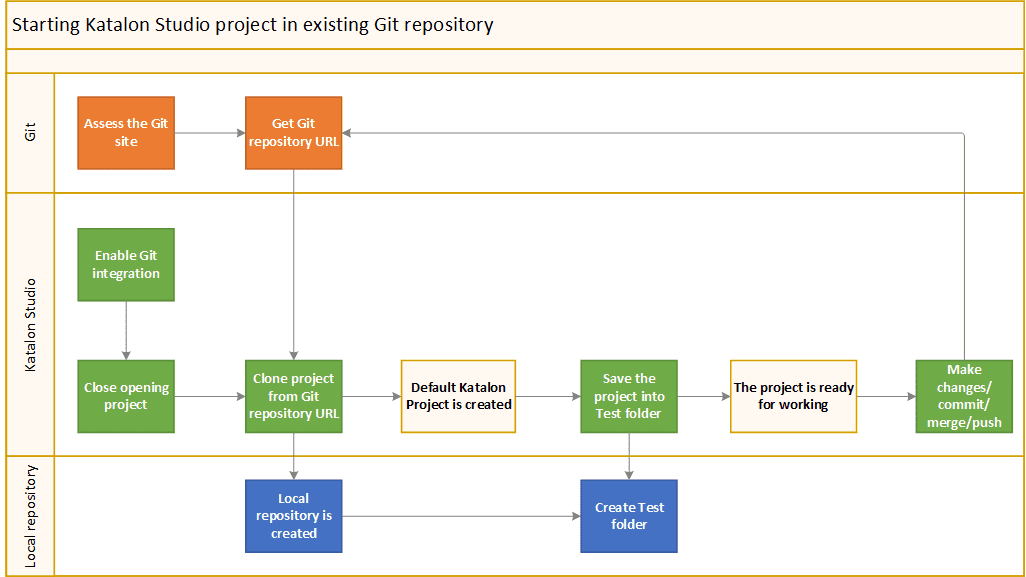 The situation is a bit more complicated if your automation team already works on a Katalon project for a while and tries to add it to an existing Git repository of the development team. In this case, you can apply the following workflow. In this workflow, you have to move the existing Katalon automation project into the test folder of the development’s local repository. You then open the Katalon project from Katalon Studio. 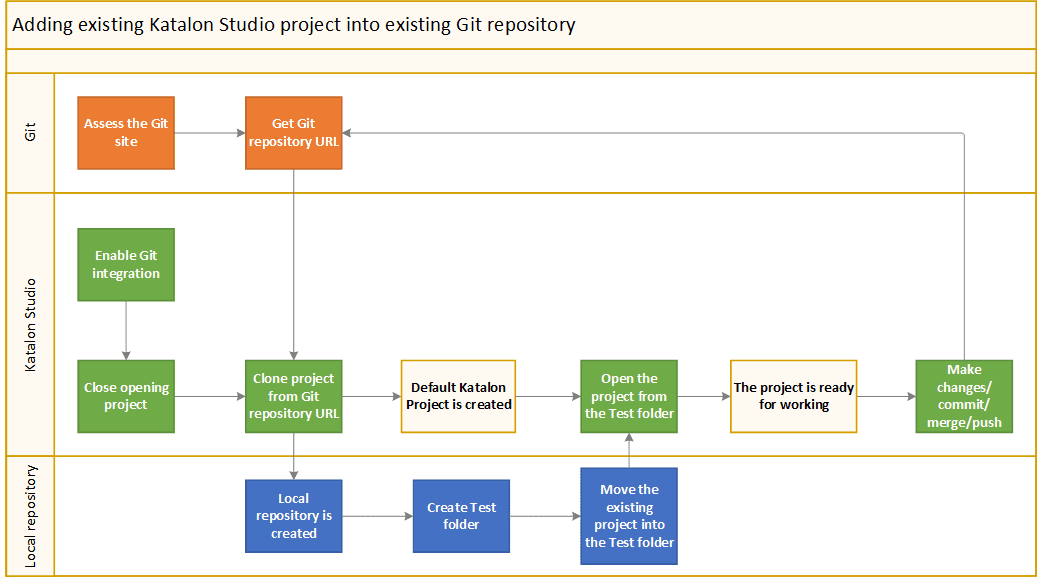 For further instructions and help, please refer to the Katalon Studio Tutorials and Katalon Forum.