Security tests ensure that APIs are secure from external threats and protected from potential vulnerabilities, as discussed in one of my previous posts. The primary focus of API security tests and security testers is finding the vulnerabilities of the API that they intend to test by running penetration tests, fuzz tests, validations, sensitive data exposure determination, and so on.

This quick read discusses the importance of pen tests, stages of its lifecycle, and testing methods.

One of the imperatives in API testing strategy is penetration testing. Pen tests are a process in the cyber-attack simulation against a system or API that exposes/determines exploitable vulnerabilities such as intra-network loopholes, XSS attacks, SQL injections, code injection attacks, and so on.

Pen tests asses the threat vector from the external standpoint, such as supported functions, available resources, and APIs internal components as well.

Having a good understanding of the causes of vulnerabilities from the earlier section is extremely important. Now, let’s get into the five different stages of pen tests, as shown below. 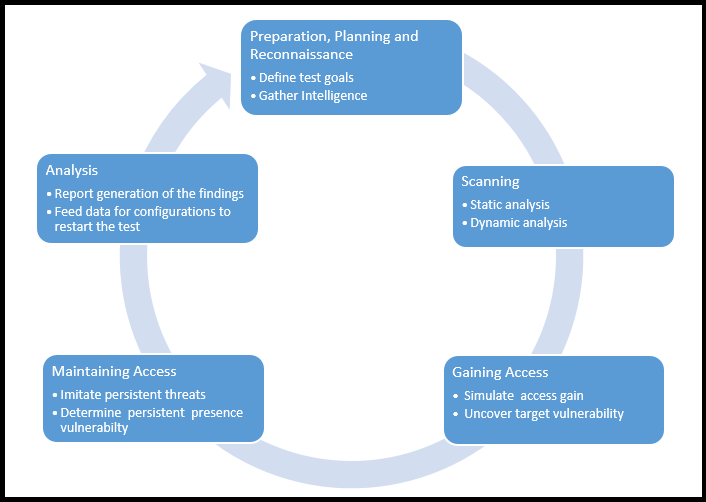 The preceding diagram depicts the lifecycle of pen tests, involving five phases of activities such as preparation, scanning, gaining and maintaining access, and reporting.

The first phase of the lifecycle involves two parts:

Understanding the target application response to various intrusion attempts by static and dynamic analysis is the focus of the scanning phase.

Attempts to uncover API vulnerabilities by application attacks such as XSS (cross-site scripting), SQL injections, code injections, and backdoors. Once those vulnerabilities are uncovered, then exploiting those by privilege escalations, data stealing methods, and traffic interceptions are part of the gaining access scope and also assess the damage that API vulnerability could cause.

By establishing an illicit, long-term presence in the network, intruders may cause irreversible damages to the systems as they may present in the system for a long-term facilitates highly sensitive data mining (especially on government, military, and financial networks) in a steady, well researched, and meticulously planned attack.

Assess the long-term presence abilities and chances of gaining in-depth access to the systems/APIs — this is the primary intention of the maintaining access phase.

The final phase of the lifecycle focus is to compile and present the results of penetration tests as a report. The report generally contains a specific vulnerability that was exploited as part of pen tests, details of compromised/accessed sensitive data as part of the pen test exercise, and most importantly, the duration of the time that one was able to remain in the system undetected. These results and reports will act as a feed/input to the security configurations across the organization to prevent any future attacks.

Hope this short read has provided a good understanding of pen tests and its lifecycle. Though there are many out-of-the-box tools available on the market to run pen tests for our APIs, it's important that one understands what pen tests are and why they are one of the key elements of an API testing strategy.

Stay tuned! In next post, we will look at the different types of penetration tests.