this post describes a method to create a facade database to provide restricted access to specific tables in your databases to specific users without granting direct access to any of the underlying databases/tables. sql server provides a feature called cross-database ownership chaining that can help us achieve this. the examples provided in this article have been developed and tested on a sql server 2008 r2 server. this feature is supported in older versions of sql server too, but we'll limit the discussion to the following versions:

when a script accesses multiple database objects sequentially, the sequence is known as a chain. although such chains do not independently exist, when sql server traverses the links in a chain, it evaluates permissions on the constituent objects differently than it would if it were accessing the objects separately. these differences have important implications for managing access and security.

when an object is accessed through a chain, sql server first compares the owner of the object to the owner of the calling object. if both objects have the same owner, permissions on the referenced object are not evaluated.

cross-database chaining can be enabled at the server-level or at the individual database-levels. enabling it at the server-level makes cross-database ownership chaining work across all databases on the server, regardless of individual settings of the database. if the requirement is to enable it only for a few databases, then you should enable it at the database-level.

to check if it is enabled already, use this query:

a value of one indicates that it is already enabled.


to check if it already enabled at the individual database-level, run:

create a database named facadedb (or any other name for that matter).

create views for each table in the primary db that you wish to grant access to the restricted user. 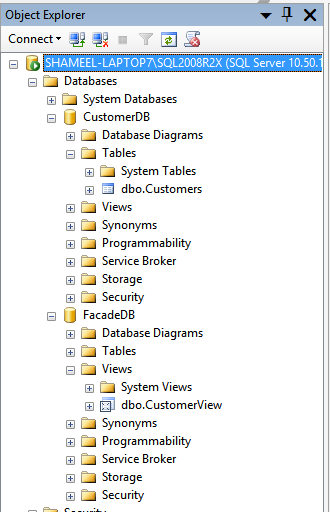 create the restricted user login and its associated users in the databases. the user must be added to the primary database as "public." otherwise, ownership chaining will not work. the user must have at least a "db_datareader" role on the facade database.


turning on database ownership chaining on both the databases

log in to the server as the restricted user (facadeuser) and execute the following commands.


you should be able to see the rows of the underlying table.

you should see this error:

the select permission was denied on the object 'customers', database 'customerdb', schema 'dbo'.

if you followed the above steps, you should have a working setup where a restricted user can query the facadedb and view the results, but they cannot query the underlying tables in the customerdb.