Tattletale is a highly useful development tool that not only has a catchy name, but also has a clever slogan: "Betraying your project's naughty little secrets." Tattletale scours JAR files to find various naught little secrets about dependencies, multiple versions, extraneous versions of classes, JARs in multiple locations, and so forth. It is a simple tool that can be run from the command-line to generate simple HTML reports of multiple characteristics about JARs and classes.

To demonstrate Tattletale, I will execute it against a Spring Framework 2.5.6 installation. It is simple to run Tattletale and this is demonstrated in the next screen snapshot. 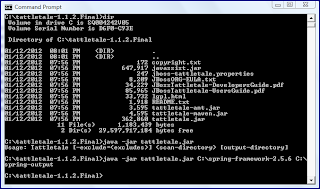 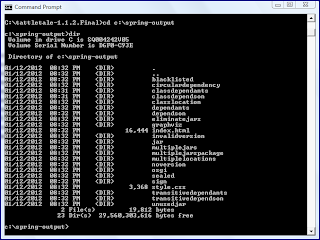 As the two previous snapshots indicate, it is very straightforward to run Tattletale against a desired directory. A web browser can be used to open the index.html page as the starting page. This is shown in the next screen snapshot. 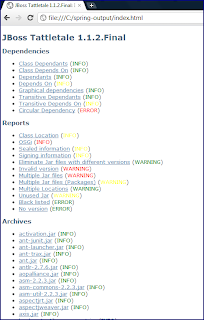 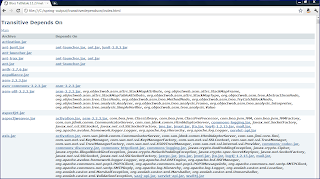 Tattletale is so easy to use, very little documentation is necessary. However, there is a slide presentation and a User's Guide with introductory information. The 32-page User Guide covers running Tattletale (similar to this post) along with providing details on how to configure the tool via jboss-tattletale.properties and providing an overview of the many reports that Tattletale provides about one's project.

To address and correct a project's naughtiest little secrets, one must know what they are. Tattletale is an easy-to-use tool that exposes these naughty secrets so that they can be addressed.