The first part is here. As a reminder, Sled is an embedded database engine written in Rust. It takes a very different approach for how to store data, which I’m really excited to see. And with that, let’s begin. I stopped in my last post when getting to the flusher, which simply sleeps and calls flush on the iobufs.

The next file is iobuf.rs.

Note that there are actually two separate things here, we have the IoBuf struct:

And we have IoBufs struct, which contains the single buffer. 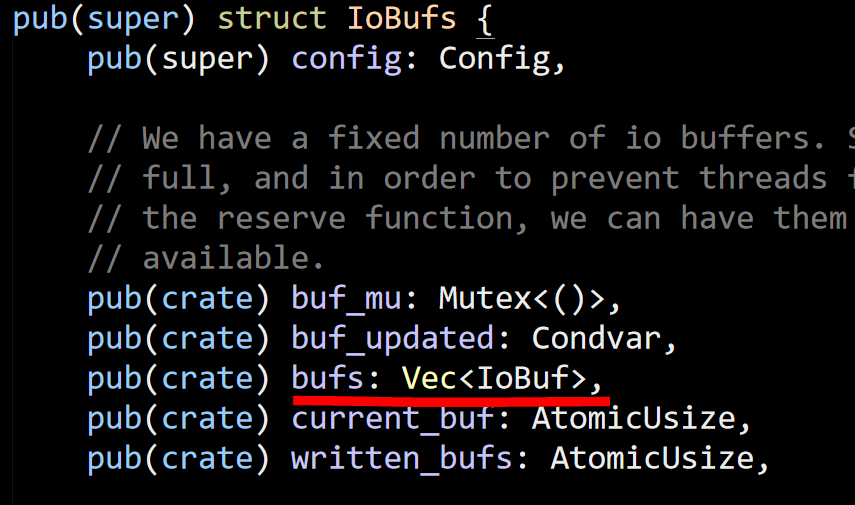 Personally, I would use a different name because it is going to be very easy to confuse them. At any rate, this looks like this is an important piece, so let’s see what is going on in there.

You can see that the last three fields shown compose of what looks like a ring buffer implementation. Next, we have these guys:

Both of them look interesting/scary. I can’t tell yet what they are doing, but the “interesting thread interleaving” stuff is an indication that this is likely to be complex.

The fun starts at the start() function:

This looks like it is used in the recovery process, so whenever you are restarting the instance, the code inside is dense. Take a look at this:

This test is to see if the snapshot provided is big enough to be considered standalone (I think). You can see that we set the next_lsn (logical sequence number) and next_lid (last id? logical id?, not sure here). So far, so good. But all of that is a single expression, and it goes for 25 lines.

The end of the else clause also returns a value, which is computed from the result of reading the file. It works and it is elegant, but it takes a bit of time to decompose.

There is something called SegmentAccountant that I’m ignoring for now because we finally got to the good parts where the actual file I/O is being performed. Focusing on the new system startup, which is often much simpler, we have: 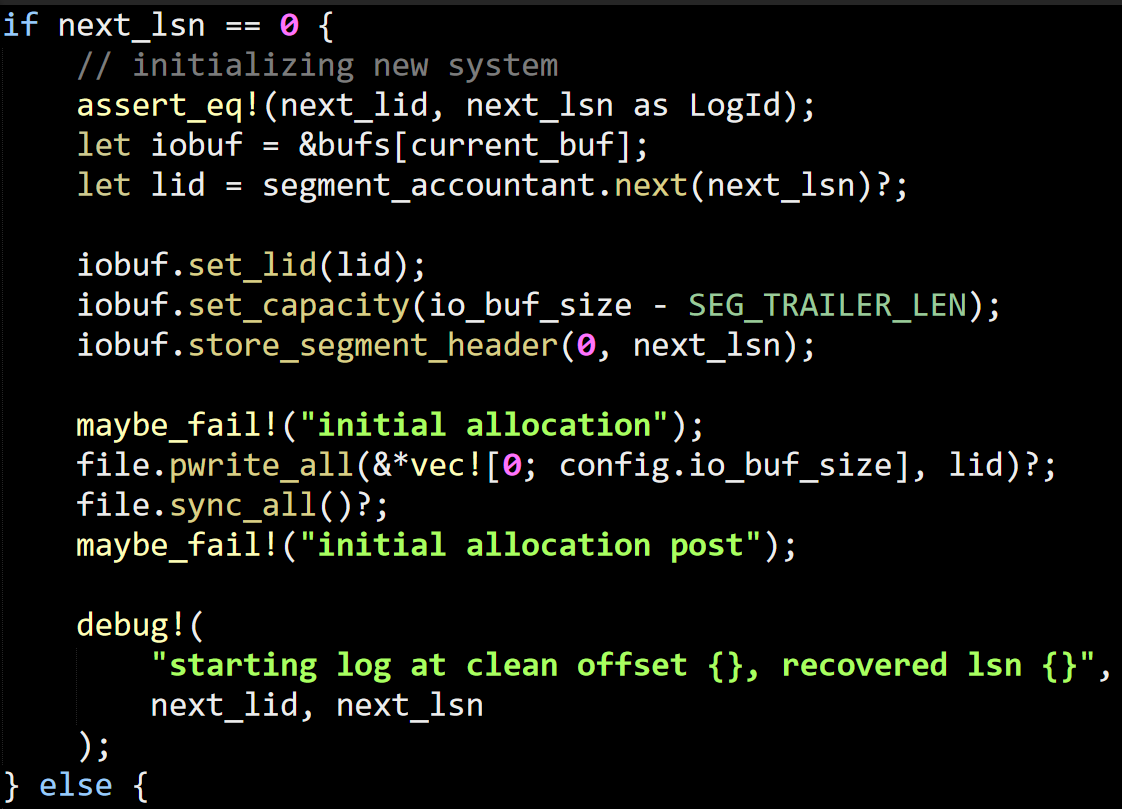 You can see that we make some writes (not sure what is being written yet) and then sync it. the maybe_fail! stuff is a manual injection of faults, which is really nice to see. The else portion is also interesting.

This is when we can still write to the existing snapshot, I guess. And this limits the current buffer to the limits of the buffer size. From context, lid looks like the global value across files, but I’m not sure yet.

I run into this function next:

On its own, it isn’t really that interesting. I guess that I don’t like the unwrap call, but I get why it is there. It would significantly complicate the code if you had to handle failures from both the passed function and with_sa unable to take the lock (and that should only be the case if a thread panicked while holding the mutex, which presumably kills the whole process).

Sled calls itself alpha software, but given the number of scaffolding that I have seen so far (event log, debug_delay and not the measurements for lock durations) it has a lot of work done around actually making sure that you have the required facilities to support it. Looking at the code history, it is a two-year-old project, so there has been time for it to grow.

Next, we have this method: 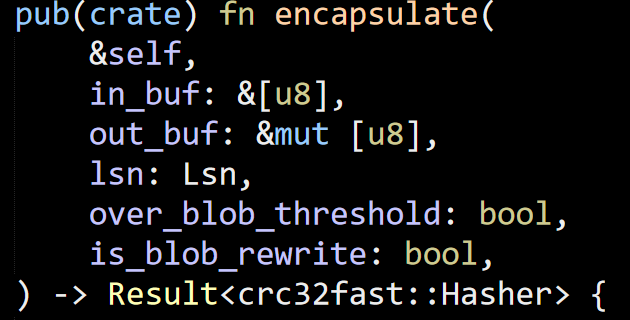 What this method actually going on in here is that based on the size of the in_buf, it will write it to a separate blob (using the lsn as the file name). If the value is stored externally, then it creates a message header that points to that location. Otherwise, it creates a header that encodes the length of the in_buf and returns adds that to the out_buf. I don’t like the fact that this method gets passed the two bool variables. The threshold decision should probably be done inside the method and not outside. The term encapsulate is also not the best choice here. write_msg_to_output would probably more accurate.

The next interesting bit is write_to_log(), which goes on for about 200 lines. This takes the specified buffer, pads it if needed, and writes it to the file. It looks like it all goes to the same file, so I wonder how it deals with space recovery, but I’ll find it later. I’m also wondering why this is called a log because it doesn’t look like a WAL system to me at this point. It does call fsync on the file after the write though. There is also some segment behavior here, but I’m used to seeing that on different files, not all in the same one.

It seems that this method can be called concurrently on different buffers. There is some explicit handling for that, but I have to wonder about the overall efficiency of doing that. Random I/O and especially the issuance of parallel fsyncs are likely not going to lead to the best system perf.

That is where the concurrent and possibly out of order write notifications are going. This remembers all the previous notifications, and if there is a gap, will wait until the gap has been filled before it will notify interested parties that the data has been persisted to disk.

Because I’m reading the code in a lexical order rather than in a more reasonable layered or functional approach, this gives me a pretty skewed understanding of the code until I actually finish it all. I actually do that on purpose because it forces me to consider a lot more possibilities along the way. There are a lot of questions that might be answered by looking at how the code is actually being used in parts that I haven’t read yet.

At any rate, one thing to note here is that I think that there is a distinct possibility that a crash after segment N +1 was written (and synced) but before segment N was done writing might undo the successful write for N+1. I’m not sure yet how this is used, so that is just something to keep in mind for now.

I managed to find this guy:

If you’ll recall, this is called on a timer to write the current in-memory state.

The only other interesting thing in this file is:

This looks like it is racing with other calls on trying to write the current buffer. I’m not so sure what sealed means. I think that this is to prevent other threads from writing to the same buffer while you might be trying to write it out.

That is enough for now, it has gotten late again, so I’ll continue this in another post. Stay tuned!