One of the key driving factors behind the various web/mobile performance initiatives is the fact that end-users’ tolerance for latency has nose-dived. Several studies have been published whereby it has been demonstrated that poor performance routinely impacts the bottom line, viz., # users, # transactions, etc. Examples studies include this, this, and this. There are several sources of performance bottlenecks, viz., but not limited to:

Over five years back, we had written a blog on the anatomy of HTTP. In the Internet era, five years is a long time. There has been a sea change across the board and hence we thought it was time to revisit the subject for the benefit of the community as a whole. The figure below shows the key components of a HTTP request.

Besides the independent components, key composite metrics are also annotated in the figure and are defined below.

A plot from an example test illustrating the aforementioned metrics is shown below:

Anomalies in any metric can be viewed and detected via Catchpoint’s portal in a very straightforward fashion. An example illustrating an anomaly in TWait is shown below:

Other composite metrics of interest include:

Render Start: The time it took the browser to start rendering the page.

Document Complete: Indicates that the browser has finished rendering the page. In Chrome it is equivalent to the browser onload event. In IE it occurs just before onload is fired and is triggered when the document readyState changes to “complete.”

Webpage Response: The time it took from the request being issued to receiving the last byte of the final element on the page.

Client Time: The time spent executing Javascript and CSS in the browser. Equal to the Webpage Response minus Wire Time

Content Load: The time it took to load the entire content of the webpage after connection was established with the server for the primary URL of the test(s), this is the time elapsed between the end of Send until the final element, or object, on the page is loaded. Content Load does not include the DNS, Connect, Send, and SSL time on the primary URL (or any redirects of the primary URL). For Object monitor tests, this value is equivalent to Load.

In the context of mobile performance, a key metric which is very often the target of optimization is Above-The-Fold (ATF) time. The importance of ATF stems from the fact that while the user is interpreting the first page of content, the rest of the page can be delivered progressively in the background. A threshold of one second is often used as the target for ATF. Practically, after subtracting the network latency, the performance budget is about 400 milliseconds for the following: server must render the response, client-side application code must execute, and the browser must layout and render the content. For recommendations on how to optimize mobile websites, the reader is referred to this and this.

A key difference between the figure above and the corresponding figure in the previous blog is the presence of the TSSL component. Unencrypted communication – via HTTP and other protocols – is susceptible to interception, manipulation, and impersonation, and can potentially reveal users’ credentials, history, identity, and other sensitive information. In the post-Snowden era, privacy has been in limelight. Leading companies such as Google, Microsoft, Apple, and Yahoo have embraced HTTPS for most of their services and have also encrypted their traffic between their data centers. Delivering data over HTTPS has the following benefits:

When the SSL protocol was standardized by the IETF, it was renamed to Transport Layer Security (TLS). TLS was designed to operate on top of a reliable transport protocol such as TCP. The TLS protocol is designed to provide the following three essential services to all applications running above it:

Technically, one is not required to use all three in every situation. For instance, one may decide to accept a certificate without validating its authenticity; having said that, one should be well aware of the security risks and implications of doing so. In practice, a secure web application will leverage all three services.

In order to establish a cryptographically secure data channel, both the sender and receiver of a connection must agree on which ciphersuites will be used and the keys used to encrypt the data. The TLS protocol specifies a well-defined handshake sequence (illustrated below) to perform this exchange.

As part of the TLS handshake, the protocol allows both the sender and the receiver to authenticate their identities. When used in the browser, this authentication mechanism allows the client to verify that the server is who it claims to be (e.g., a payment website) and not someone simply pretending to be the destination by spoofing its name or IP address. Likewise, the server can also optionally verify the identity of the client — e.g., a company proxy server can authenticate all employees, each of whom could have their own unique certificate signed by the company. Finally, the TLS protocol also provides its own message framing mechanism and signs each message with a message authentication code (MAC). The MAC algorithm is a one-way cryptographic hash function (effectively a checksum), the keys to which are negotiated by both the sender and the receiver. Whenever a TLS record is sent, a MAC value is generated and appended for that message, and the receiver is then able to compute and verify the sent MAC value to ensure message integrity and authenticity.

From the figure above we note that TLS connections require two roundtrips for a “full handshake” and thus have an adverse impact on performance. The plot below illustrates the comparative Avg TSSL (the data was obtained via Catchpoint) for the major airlines: 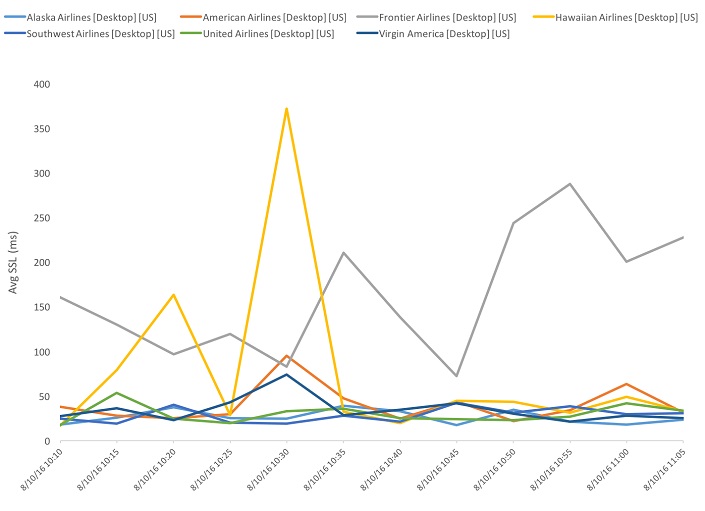 However, in practice, optimized deployments can do much better and deliver a consistent 1-RTT TLS handshake. In particular:

The combination of both of the above optimizations allows us to deliver a consistent 1-RTT TLS handshake for new and returning visitors and facilitates computational savings for sessions that can be resumed based on previously negotiated session parameters. Other ways to minimize the performance impact of HTTPS include: