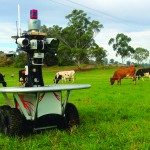 the growing presence of automation on our farms is something i’ve touched on a few times, culminating in japanese plans for a largely autonomous vertical farm, which is due to launch in the next year or so.

suffice to say, indoor farms are slightly easier to automate than their outdoor brethren, but that is not to say automation is not impacting traditional farming too.

a good example of this is the bonirob robot that has been developed by deepfield robotics, a subsidiary of bosch. they have developed a robot that can perform the more tedious aspects of modern farming.

it can successfully remove weeds from fields, manage plant breeding and various other crucial yet laborious tasks.

the ultimate aim is for bonirob to act as a mobile plant laboratory that can decide upon the survival chances of plants on the fly or determine how much fertilizer is needed at particular times.

the device utilizes machine learning, with researchers training bonirob with thousands of pictures of healthy leaves and weeds.  it uses these to accurately identify things it should nourish and things it should bash.

“over time, based on parameters such as leaf color, shape, and size, bonirob learns how to differentiate more and more accurately between the plants we want and the plants we don’t want,” the developers say.

the machines crushing device is designed to structurally destroy any weeds it encounters, thus hopefully giving more desirable plants a chance to flourish.

when the device was tested out in carrot fields, it was over 90% effective, but it’s hoped that with greater learning it will improve even upon that.  the mechanical nature of the process also means no herbicides are required to keep fields ‘clean’.

the developers also hope to build communication into the robots so they can collaborate effectively between each other, alerting their peers to areas that need extra muscle.

it is currently available as a research platform so it will be a little while before bonirob is patrolling a farm near you.  the team are confident that the transition is inevitable however.  check out bonirob in action in the video below: