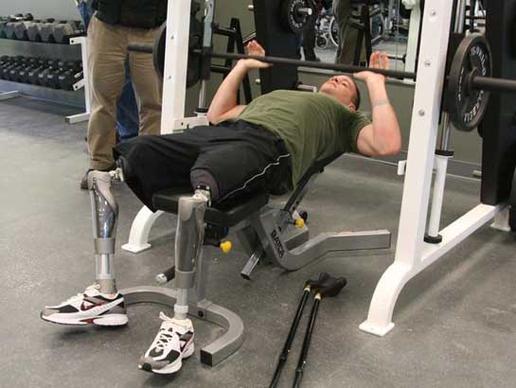 Robot technology has entered a wide range of fields in recent times, but one of the more interesting has to be that of prosthetics.

Researchers at Carnegie Mellon have developed a robotic prosthetic that can help its user regain their balance.  It does this by working in much the same way as a human leg.

The robotic prosthesis was created after studying how human reflexes and neuromuscular control systems work.  The device has shown promising results in initial lab testing, enabling the user to maintain a stable gate even over uneven terrain.

“Powered prostheses can help compensate for missing leg muscles, but if amputees are afraid of falling down, they won’t use them,” the researchers say. “Today’s prosthetics try to mimic natural leg motion, yet they can’t respond like a healthy human leg would to trips, stumbles, and pushes. Our work is motivated by the idea that if we understand how humans control their limbs, we can use those principles to control robotic limbs.”

The process of studying human movement may not only help leg prostheses, but also see improvements for leg movements in robots.

The project builds on over-a-decades-worth of research into walking and motor control.  The team believe that the leg extensor muscles are crucial for straightening joints.

The study revealed that the neuromuscular control method is effective at reproducing normal walking patterns.  It is also capable of responding to disturbances as the leg begins its swing, although more work is needed to respond effectively to disturbances in mid-swing.

Devices that are motor powered are capable of adjusting the angle of both the knee and ankle as the user walks, thus providing a more natural gait.

The motors help to compensate for the missing muscles in the leg, thus making it less taxing for the amputee and therefore more able to behave as an able-bodied person's leg would.

With over one million people with leg amputations in America alone, this is a sizeable issue. Surveys have suggested that fear of falling is a considerable concern, and the difficulties in walking over uneven terrain provide an obstacle to a high quality life.

“Robotic prosthetics is an emerging field that provides an opportunity to address these problems with new prosthetic designs and control strategies,” the researcher says.

Check out the video below to see the device in action.

Published at DZone with permission of Adi Gaskell. See the original article here.