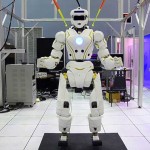 MIT’s Computer Science and AI Laboratory (CSAIL) are arguably the foremost authority in the world of robotics.  Over the past few years they’ve made great strides in developing robots that can collaborate with one another, learning as they go.

So it will be fascinating to see what they can achieve when given a robot to work with by the space agency NASA.  The robot, which will be known as Valkyrie, will be given to the lab in order for them to develop smart algorithms as part of the Space Robotics Challenge being run by NASA.

The challenge aims to create dexterous, autonomous robots that can support, or even replace humans in missions that veer towards the extreme end of what has thus far been achieved in space.

The CSAIL team emerged victorious in a recent DARPA Robotics Challenge and they will receive around $250,000 a year from NASA to work on Valkyrie.

In a world that is increasingly populated by automated spacecraft, it is interesting that this project is focusing on humanoid robots.  NASA believe that they have the potential to help or replace astronauts in extreme environments.

The eventual goal is to advance Valkyrie such that it is capable of performing deep space exploration.

“Advances in robotics, including human-robotic collaboration, are critical to developing the capabilities required for our journey to Mars, we are excited to engage these university research groups to help NASA with this next big step in robotics technology development.” - NASA

There are few teams as well equipped to take on such a challenge as CSAIL, and they have achieved considerable success in the past few years in the development of such humanoid robotics.  Previous projects have, for instance, developed robots capable of performing fiddly tasks such as drilling holes, climbing stairs and even driving cars.

It will be fascinating to see what they come up with in their work with NASA.  You can find out more about Valkyrie in the video below.