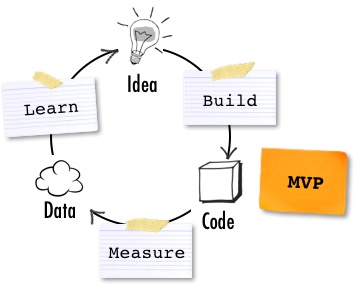 Start-ups, a synonym for enthusiasm, new ideas and of course, lack of funds.

Sounded a little weird right? It's true, most of the start-up's owners have a bundle of ideas with the sporting spirit to make those things happen but the only thing that leads them back is money that is needed to be invested to make those fined and polished end products.

Here the only survival option that comes to their rescue is the minimum viable products. Yes creating MVP cuts many costs that come from the market in the form of feedback and changes once the final product is launched in the market.

You may also like: The 10 Must-Have Project Management Skills of 2019

You might be getting confused about what this actual scenario is all about, so before we jump into the benefits of creating MVP, let's know what MVP is all about.

MVP's are the basic version of the final product which is launched to identify the potential or chances of the product to get success. Based on the market response the changes are made in this pre-launched product to get the better and a full-proofed workable version.

As the sole purpose of creating MVPs is the initial testing, no more than necessary or important features are added into it. This is the strategy adopted by most of the developers and team leaders to validate their idea and know its market acceptance.

Now when we are aware of what these products are and the purpose behind creating it, let's get straight to the point and know-how can these first versions benefit the start-up owners.

How creating an MVP is beneficial for start-up owners?

The most crucial advantage of creating MVP's is it saves money, as I told you at the very start of the article, money is the pain point of every start-up owner.

Launching the first versions of the final products will help the developers know about the loopholes from the user end and also give them an idea of whether it could catch the attention of potential customers and investors. This saves their time and the money that is to be invested to create the final version.

Pre-launching the first version of the product will help the leaders and the team understand whether they are up to the moving trend and if not what can be changed in the first version to match it to the ongoing customer preferences.

Creating the final product might take a longer time, your investors might not wait for you to complete your task of getting successful in executing the ideas. Showing them your MVP versions can help you get their interest as you can pitch them in a way that even if it's not the final work, your product can lead the market with its preview.

You Will Get Your Audience

Not everyone will like your product. As every product has its specific audience, there would be people out there who will not like your product even in its final form. Don't worry they are not your audience.

Giving the first version in the hands of the end-user you will create a great customer base with the people who would like it and you will already have your potential buyers ready to purchase your end products.

Being a start-up you will always have a fear of things not working out well, by launching the first version that is MVP you will get to learn the areas that you as well as your team needs to make the improvement.

Don't rush to get things out in the market, proper planning before the launch of the MVP could help you gain greater benefits.

Want to know how? Read further.

Things Every Start-Up Need to Do Before Launching MVP

You have a great idea, but that doesn't mean it's going to be a hit in the market, bringing the innovation you think it would make. There are many more start-ups out there who think the same way and do have something different to give to the audience.

Study them before you plan your application features, know the trend, make changes in your work plans accordingly. You might come across some amazing things that can complement your existing idea once you go through your research.

The in-depth research done before will help you get to know the audience and their likings. There are many competitors out there who are providing the same services as you do. Study their loopholes, know what the customers don't like about their services and how can you overcome their drawback in your product to satisfy them.

After you are clear with the research and the customer definition and need, you are ready to make the work-plan about how you want your product to be.

Decide the features, write it down on paper, make a rough sketch of the final product and set your army to get started with the implementation.

After the completion of at least one version of your final product, it's time you do the necessary testing before launching it in the market.

The first phase should include the technical testing where the app tester using his software would validate if the app needs any specific change, while during the second phase the app is given to the normal user (a non-tech person) to get the experience of its usage from the customers perspective.

The final and the most important thing that comes after the app gets ready where is the user going to land once he/she clicks the app link.

Yes, here I am talking about the landing page which gives your customers an idea about what the application is all about and how it could benefit them to build their interest.

MVP's are the safest option for any app and website development start-up to get into the market to launch its ideas. Launching its own product

In a project, no task exists in isolation. Every task derives meaning in relation to other tasks and all tasks if done right make the project successful. In simple words, tasks depend on one another and on people who are responsible to complete them.

What Is the Need to Set Task Dependencies?

Setting dependencies between tasks play an important role in the planning and scheduling of projects.

A project is a combination of many tasks belonging to different areas of expertise. Developers, testers, designers, content creators, etc. work in collaboration to make a project successful and deliver it on time.

In this scenario, prior planning becomes very important. Project managers have to decide as to what will be the sequence in which tasks will be done, who will be responsible for which task and how the schedule will be planned so as to meet deadlines right before time.

What Are the Types of Task Dependencies?

Task dependencies are basically of the following four types.

Finish-to-Start (FS): This is the most common type and logically driven dependency in project management and everyday life.

As per this, a particular task B cannot start until task A has not been completed properly. For example,  you cannot start baking the cake until the batter has been prepared.

Finish-to-Finish (FF): As per this dependency, a particular task B cannot finish before task A has been finished.

Let’s say you have a bakery business. You cannot finish the delivery of the cake (B) before finishing the cake decoration (A) has finished. (you have to finish cake decoration before reaching delivery location).

Start-to-Finish (SF): As per this dependency, a particular task A must start before task B is finished.

Let’s say you received a cake order, though the preparation of cake has started, you cannot bill the customer as long as the delivery of the cake has not initiated. Therefore the finish to the task of billing (B), the task of delivery (A) must start.

For example, You can start preparing to ice (B) the cake as soon as the cake baking(A) has started.

What Are the Factors Affecting Task Dependencies?

Let us understand these factors.

Logic-based dependencies: A tester cannot test code before it is written. Also, we cannot garnish our food before it is cooked.

So, one task follows other logically irrespective of the resources and equipment availability. These are logic-driven dependencies.

Resource-based dependencies: A team can write more code if the number of developers is more. They can tackle things simultaneously and productivity will be increased. But, if the number of professionals is limited, then things have to proceed in a sequential manner.

So, the availability of resources is one constraint that defines task dependencies.

Preferential dependencies: We can cook rice directly but we prefer to soak them in water for sometime before cooking. This is preferential and not mandatory.

Similarly, preferential task dependencies are based on the best practices or convenience of managers or team members. They are generally introduced to ensure quality in your tasks and projects.

What Are the Benefits of Setting Task Dependencies?

By setting task dependencies on a Gantt chart, the project managers get a timeline of the project on a bar chart.

Setting task dependencies gives clarity about the following points and directs the planning for future and emergency situations.

The project gets planned in the optimum manner as there is a clarity about the sequence of tasks after setting task dependencies.

Project managers, as well as team members, can have quick access to the status and growth of the project.

A timeline view gives a better understanding of projects and can help understand the weak areas or potential emergency situations.

Project managers can get access to employee workload by setting dependencies and viewing who is available when.

Clear visibility into dependent tasks and tasks that affect the deadlines helps calculate the critical chain and critical path of a project and take decisions accordingly.

How to Set Task Dependencies?

To set task dependencies, you need a Gantt chart. A Gantt chart is a tool that represents all your tasks in a timeline view. The tasks are represented in the form of rectangular boxes on a Gantt chart. Dependencies can be set with a simple drag from the first task to the dependent task.

The importance of planning cannot be overlooked in any project. Setting dependencies between tasks can make the planning process easier and more accurate. Also, having set task dependencies makes it possible to execute the work in an organized manner so that no loopholes are left.

How a Program Manager, Product Manager, and Project Manager Collaborate

A Complete Guide to the Project Management Lifecycle

How to Become a Project Manager — A Cursory Introduction