Message brokers facilitate communication between Message Publishers and Message Consumers. The instructions (fields) in the message are structured by the publisher of the message in a way the consumer can understand and parse without any problems. This mutual agreement is known to the developers, but not all projects externalize this agreement as a contract.

Just like we have API specifications (in different formats like Swagger), we ideally have to have Message specifications as well.  (These specifications are called event specifications in reactive solutions but the concept is the same) The message specifications should be externalized from the code, and be tracked in an SCM (Source Code Management) system like Git. This way, the specification can also be owned by the master of that source code repository and any feedbacks, change requests can be collected and handled by native functions of SCM (Pull requests, merge requests etc.). (I have seen companies using MS Excel for the same, but it is not easily manageable after some point).

Who will own the repository? In the case of event/message specifications, the repository is owned by the owner of the event, the Publisher. Publisher software's owner will be a team in our organization. This organization will have the task of creating the specifications, putting them into domain/microservice organized repositories and manage the lifecycle of them as the business, therefore technical capabilities evolve.

The changes in the specifications should also be published to the developer community by some mechanism, over an internal portal or even via a simple changelog file. (We don’t notify everyone about the updates though, more on that later.)

Messages/Events are generally expressed as JSON structures, with name-values in it. Sometimes, where the throughput or message size is a concern, binary message formats are preferred and guess what, these binary messages will mandate a specification. So, if we are dealing with binary message formats, we are already managing specifications by design. For JSON based messages, the specification management part is generally omitted by developers due to the size of the project, or the flexibility provided by JSON - Object mapping parsers. Additional changes to a JSON payload are not a breaking change for example, and knowing this fact, sometimes the publisher's developers will not even take the action to notify their consumers.

Regardless of it is a breaking change or not, we should try to design and implement our message/event repositories to keep track of our specifications. Event change management also includes knowing and tracking your consumers. Brokers expose reports which can be leveraged to keep track of the consumer applications (via their respective client-ids). Consumer Impact Analysis should be run on this inventory whenever we will execute a change in the metadata (queue names, TTLs, cluster updates) or a specification change. This way, only the necessary teams will be notified. (The new consumers (teams) do not need this update, they are developing from scratch and can go to the portal/MD file->repository to find the latest specification. Managing notifications (audience and frequency) wisely is very important. Poorly managed notifications lead to notification creep and negligence,  which will also lead to not-followed processes).

In this article, I will demonstrate a strategy for rolling an update to a consumer fleet. In this scenario, we will be having a backlog at a queue that resides on an AWS SQS broker. This backlog will be consisting of old messages which have a message version of v1.

In this scenario, we will update the publisher, on the fly to start emitting a new message format, v2.

The consumers, who are acting upon this publisher's messages will not be able to parse this v2 message format anymore. (We will be  assuming that this is a breaking change) The challenge is to process the old messages and the new messages from the same queue via different consumers who can understand each message type respectively.

To solve this challenge I will be applying the following steps:

I will create a demo.fifo queue for this demo in AWS SQS with the following settings. (I am adding the delivery delay for demo purposes only) 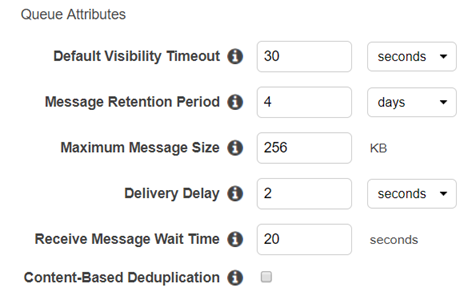 I will be using NodeJS SDK for AWS SQS for both publisher and subscriber code. The publisher code looks like the following:

By using this publisher, I will first publish 10 messages to the queue named "demo" with the old version identifier. (v1) Payload is a simple JSON object {"name":"message"}

I now want to be sure that I can see the backlog in my queue via AWS CLI:

I am getting the expected message version from command line arguments. In real life, this could be injected inside the OS as an environment variable.

As you can see, the code checks for the message attribute named EventVersion to see if it matches its set version. If there is a match, it logs the message payload into the console, if not, the message is rejected and returns back to the queue.

The new consumer is using the same codebase, (for this example, in the real world there will probably be different parsing and or business logic.), but I am passing a different expected message version of “v2” via command line arguments.

Before starting the consumers, I will start the publisher one more time to emit some new messages (version 2) behind the old ones, I will be sending an additional 5 via;

I will start the consumers in different terminals to examine the results.

Starts by consuming first messages, all are "v1", and processes them without complaining. As soon as it reaches the "v2" messages, it starts rejecting them which causes them to be eligible for Customer 2. 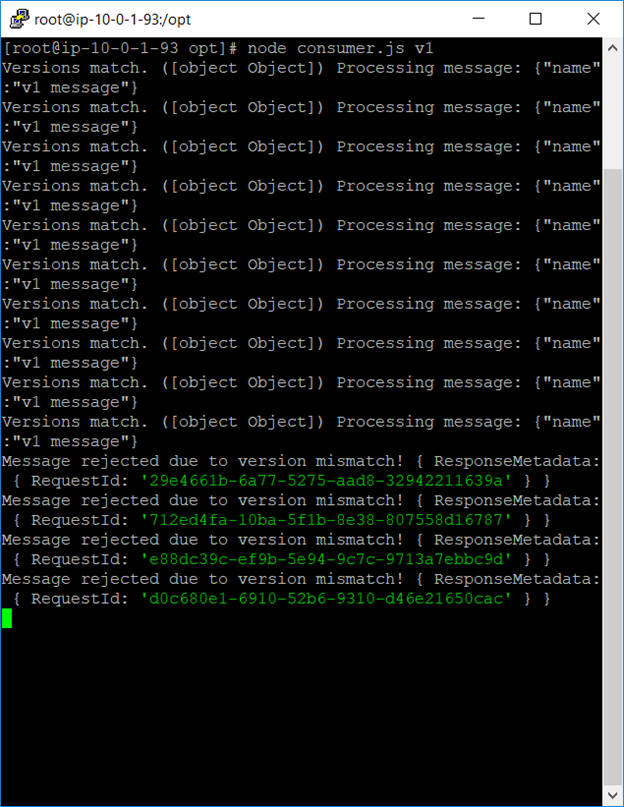 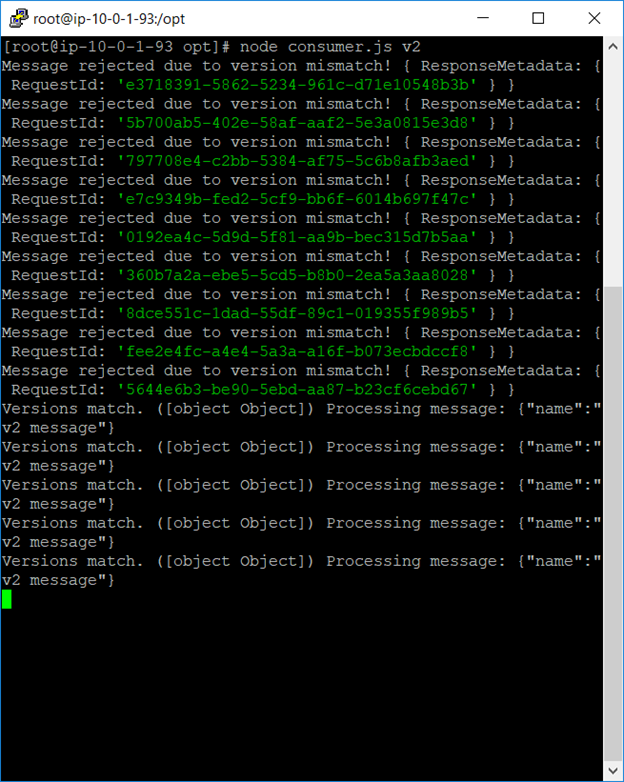 This rollout strategy can also be used for other interesting scenarios such as business logic changes at a specific date. (old messages published before that date will be subject to a business/regulatory logic which differs from the ones having a later publish date).