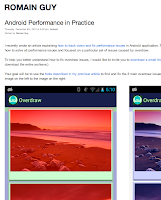 Romain Guy is one of the Android framework engineers at Google. Few people have better understanding of internal workings of Android UI layer than him.

Recently, Romain wrote two detailed posts to his blog about Android app UI performance which are very much worth reading by anyone who is writing Android UI code for any apps.

The first post, Android Performance Case Study, is a case study using the Falcon Pro twitter client as the example. In the post Romain explains how to debug UI performance and how to approach fixing it if your app seems to have performance issues.

In the second post "Android Performance in Practice" Romain introduces an example app with source code available for download that demonstrates the principles in practice.

Romain has also started a new series of blog posts, Android Recipes, with a first part Android Recipe #1, image with rounded corners explains the most efficient way of rounding corners on dynamic images. Let's hope we'll see more of this from Romain in the future!