this blog post describes the best way to host a private docker registry instance on amazon ec2 and amazon s3. you can skip the text and go to the ‘resources’ section to get the ecs task definition json.

when working with microservices nowadays, you can hardly avoid using docker. after building your first docker container, your next step would be to share it with the world (or your colleagues). to achieve it you have three alternatives:

for a small project, the docker hub ‘way’ is the best alternative: you can host one ‘private’ image for free, whereas commercial pricing plans will allow you to upload more. for more serious projects, we would like to retain control of our most precious asset—our code, so we want to run our own private instance of docker registry on amazon ec2.

after a little bit of googling, we found a great article from codeship guys (disclaimer: we are longtime and happy users of codeship ci ). this blog post describes the process very well and up to the smallest details, however, some of the aspects of ‘production’ deployment like authentication and encryption (aka https) are not described, and that’s what we want to describe in this blog post.

our goal is to give you a ready-to-use recipe for deploying your private instance of docker registry that is running on top of amazon elastic container service (which runs on top of ec2) and uses amazon s3 as storage.

note: you don’t actually need to do this, just use a ready-made elasticio/docker-registry-ecs , no worries you can set all custom configuration properties (e.g. s3 access credentials) via environment variables later.

however, we need to enable some of the features of the docker registry, e.g. s3 as storage and authentication, so we need to customize the configuration—instead of default values, we need to place our changed config.yml in the image with the following content:

the best part is actually that you don’t have to do it as we prepared a ready-made image you can use with exactly the same content described above. you can find this image under elasticio/docker-registry-ecs name on github .

note that we don’t have to enable https on the docker image itself—we’ll use an https termination feature on amazon elb and save us in-container certificate deployment step.

create a task definition in ecs

we’ll run registry docker image on amazon elastic container service (that runs on top of ec2). ecs runs applications (called tasks) inside the set of ec2 instances called cluster. so, the first step you need to do is to create a new cluster on ecs. it’s easy to do via amazon console, just launch a sample cluster called ‘default’.

after your cluster is up and running, you need to upload a task definition. task definition is a json that defines which docker image to run, what resources it needs, and its environment variables and their values. here you can see the tasks definition with one task:

as you can see, here you need to set the following environment variables:

as the next step, we need to configure users/passwords for http authentication that will be used for the registry. unfortunately, we haven’t yet found the way to deploy it via environment variables, therefore, it’s done via filesystem mount.

you would need to add ssh into your cluster’s node and create a new htpasswd.

then you need to create a folder auth and create an htpasswd file inside it:

last but not least, generate a username/password line and append it to .htpasswd file.

next, you would need to create a ‘service’ from your ecs task, just click on the clusters , select your cluster and click on the create new service . then select a task description and specify the number of instances of your task. 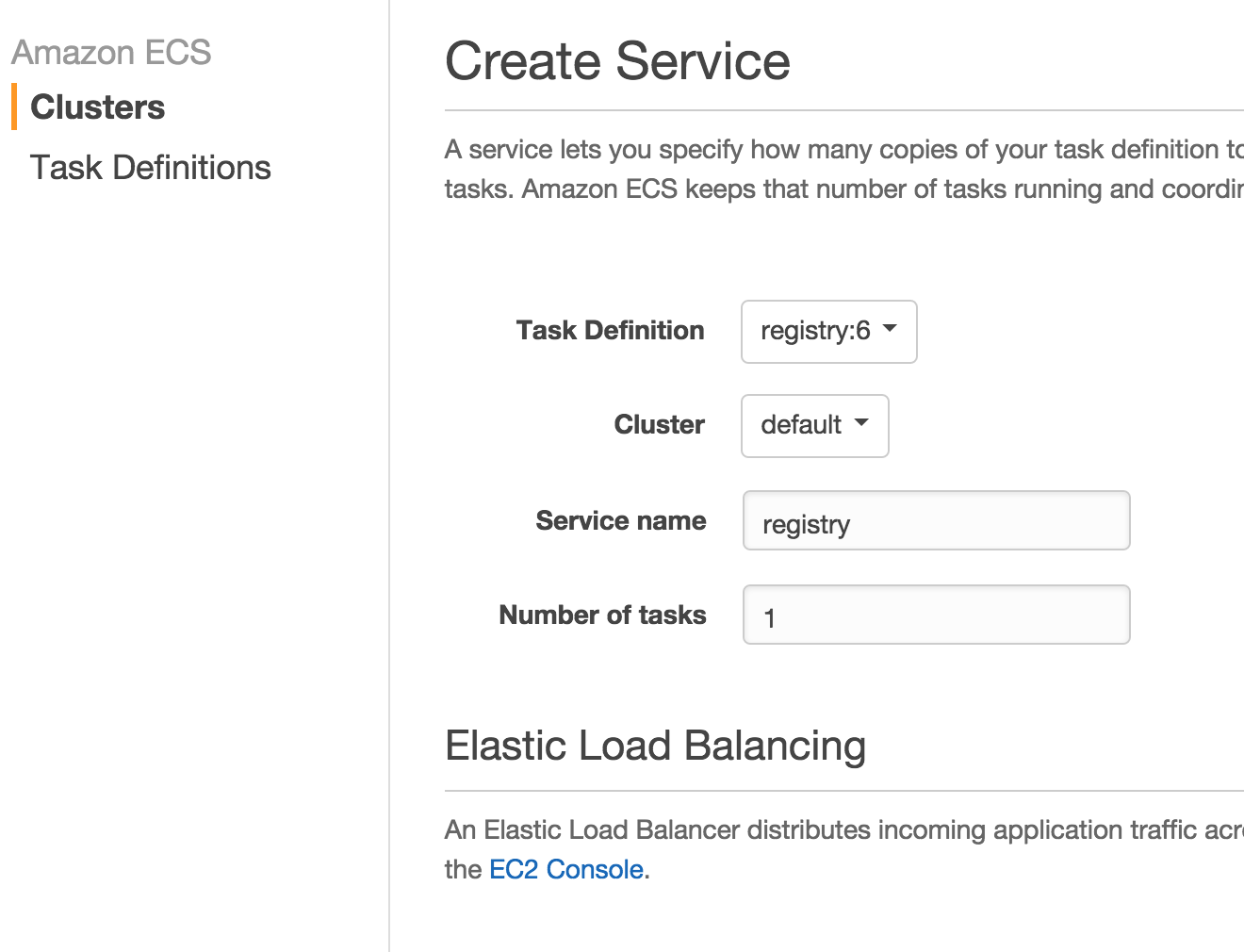 then launch the service and wait a minute or two until it fully starts:

so, now we have a docker registry running on amazon ecs with http basic authentication to protect your know-how, the only missing piece is encryption—enabling https. one possible way to achieve this is to enable https inside the docker registry image as described here . we, however, will use https termination feature of the aws elastic load balancer.

go to the ec2 console (from ecs console) and find a load balancer that was created together with your ecs cluster. now you need to do two things:

1. change the listener’s health checking settings to tcp:5000—this is important so that lb knows when your registry instance is up and running. originally configuration to http:5000/ won’t work as elb expect http 200 while it will be getting http 404 from registry instead. 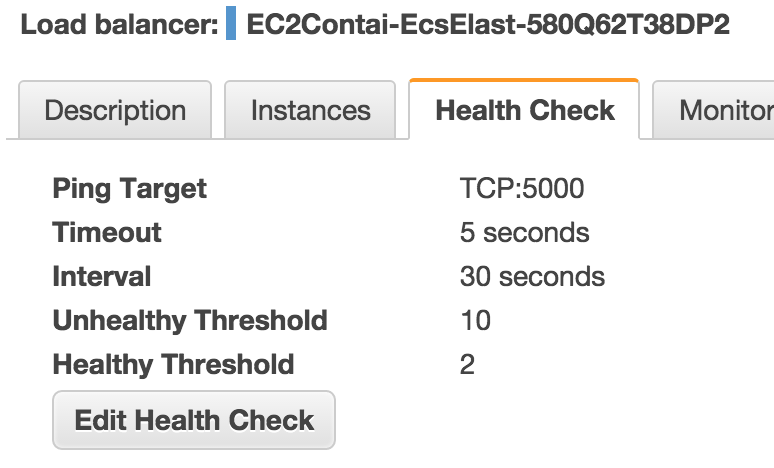 2. change listeners configuration: you need a single listener that listens on https:443 and forwards requests to http:5000 of the instance. here you can deploy your https certificate.

so, now you should be all set, your private docker registry will run on ec2 instance and store data to s3. your registry will be protected by http basic auth which is in combination with https (terminated on elb within your aws vpc) is a good way to protect your docker images.

we gave our registry the name registry.elastic.io, which is a cname alias to elb dns name. now take the curl and try to query your newly deployed docker registry.

and, you should see:

now you can try to log in with your docker to your new registry:

let me summarize what we did:

that’s it—now you have a running private docker registry on your infrastructure hosted on amazon web services.

the setup described above is not ideal, because due to the lack of time, the following actions are skipped (feedback and change suggestions are welcome):