Depending on who you talk to, one of the coolest parts of the new Windows Phone OS coming to devices in the next few months is the ability to run Android apps. Yes, you heard me correctly: You will be able to run Android apps on your Windows Phone 10 device. With the preview releases coming out on a regular basis lately it’s good to see we’re getting a little bit closer to having this ability in everyone’s hands soon, but in the meantime the question really is: How do I get to try this now?

Getting Your Device Setup

The first thing you’re going to have to do is get setup with Windows Phone 10.

Firstly, check whether your device is on the supported list: http://windows.microsoft.com/en-us/windows/preview-supported-phones

If you’re lucky enough to have a supported device the next step is to simply follow this guide and download the Windows Insider app to upgrade your phone to Windows Phone 10.

It takes a while to install, but don’t worry about me, I'll just sit here and wait for you…

Note: Windows Phone 10 is a preview operating system. It’s not 100% stable, may behave strangely/delete your data and isn’t generally recommended for everyday usage.

Once you’ve got Windows Phone 10 up and running on your device.

You’ll want to then open up your settings app on the phone, and search for “developer mode”. Which should return the developer mode settings screen. 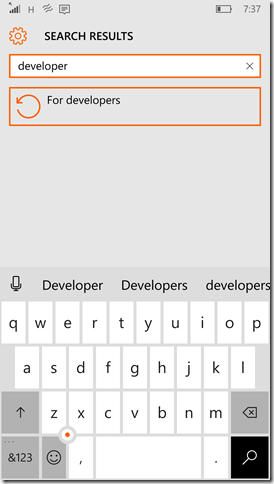 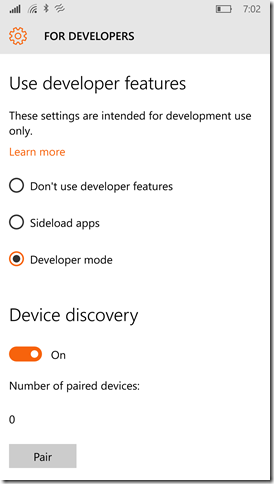 In order to side-load Android APKs onto your phone you’ll need to download and install a Microsoft internal application called APKTOW10M available from here.

Once you’ve installed the app, launch it and connect your phone via USB.

On your phone, with the above developer screen open, click “Pair” to connect it to your desktop device. Your phone will give you a code – enter it into the text box of the APKTOWIN10M app. This will permanently pair your desktop and laptop. 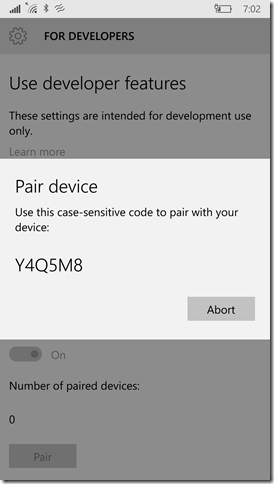 Now you’re ready to install an Android app on your Windows Phone.

To install an Android app on your Windows Phone 10 device you’ll need to grab yourself an APK (the Android package format) of your favourite app so that you can side load it.

Android has a pretty notorious reputation for app piracy, so if you look hard enough this shouldn’t be too hard to find the app of your choice.

For people like you and I who respect the hard work that goes into developing apps, you can grab yourself some open source apps over at F-Droid https://f-droid.org/

Find an example app that you’d like to try out, and download the APK. In my example i’m going to be side-loading the Acrylic Paint app. 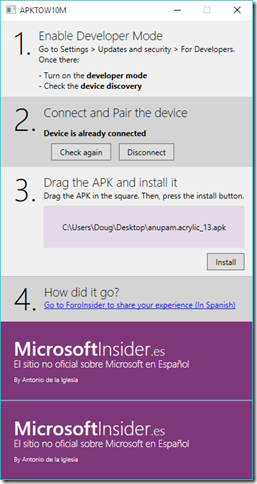 Drag-and-drop the app onto the APKTOW10M app, and click install. 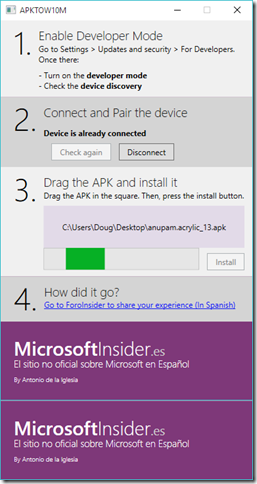 Once complete, switch over to your phone and you should see the new app in your “Recently added” list. 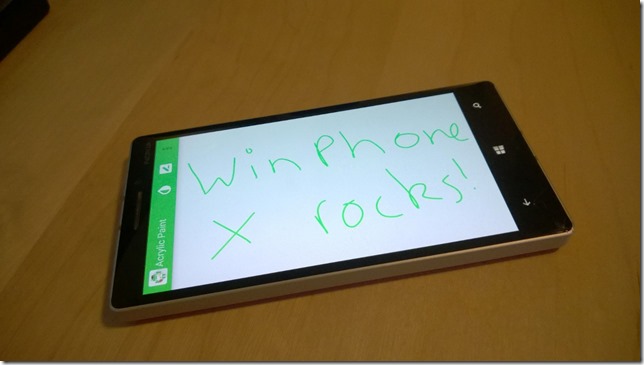 After using Android apps on Windows Phone though I’m not so sure if I agree. In general I’ve loved using Windows Phone for a number of years as my “daily driver” device simply because in my opinion it “works better” when it comes to getting stuff done; full office, a great version of outlook mobile and always packaged with some great hardware on the flagship devices such as my current Lumia 930.

Having Android apps on my phone has just made it better as I have the awesomeness of Windows Phone’s OS, with the additional support of any of the apps I may not have had previously. I’m hoping that this only does good things for Windows Phone in the future. As someone who actively switched from an iPhone and stayed I can say that it’s a great ecosystem, that seems to simply have had less love than it deserves – here’s hoping the addition of Android apps is able to provide some of this long missed user affection.