a few things to mention before getting our hands dirty with the real stuff:

with these warnings in mind, let’s start in safe waters and make a default asp.net core 2 web application run on windows 10 iot core.

i created a default asp.net core 2 web application with visual studio and made the compiler build an exe file that can be run directly. just open the project file and add this output type setting:

now we can build a web application just to find out that the exe file is not there. we will get it when publishing the application.

before building and deploying our web application to our board, we have to make it listen port 5000 on all interfaces. for this, we modify the program class and use * as the host name.

to deploy our application to windows 10 iot core, we need to publish it and tell the dotnet utility that we want to support windows 10 on arm. this is done using the following command.

if everything went well, then the published files are in the folder bin\debug\netcoreapp2.0\win-arm\publish.

to make a simple test run for our web application, we need to deploy it to windows 10 iot core. here are steps to follow.

if there are no problematic dependencies in our web application, then we can see some output to the powershell window.

notice that asp.net core is listening to port 5000 on all network interfaces. let’s open the application now using a browser. 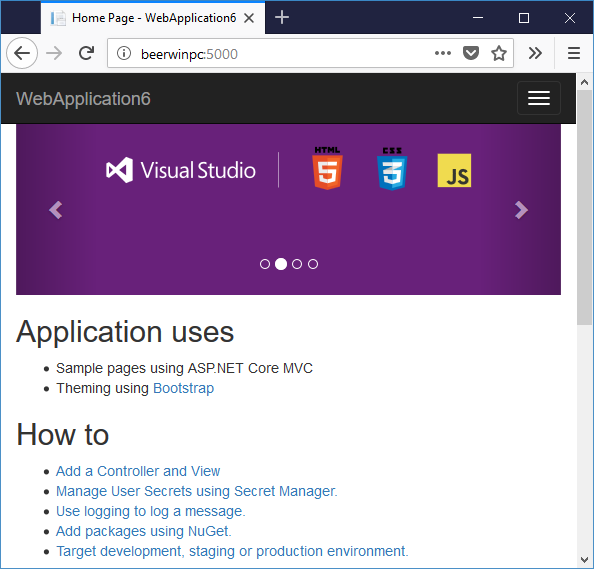 we don’t see any debug output in powershell except exceptions (if there are any).

note : the frst request to the web application is very slow, but after that, the app works fast and doesn’t put much load on the board. most of the requests don't consume much cpu, and the working set of memory is around 104 mb.

it is still risky business, as many things that run on usual boxes without any issues are not built with windows on arm in mind, and issues with these components usually appear when running the application on board. still, we can use asp.net core on windows 10 iot core and come out with solutions where a simple web server on a board is needed.