So far, we have learned the basics of Rust syntax, developed a custom Kubernetes controller, and integrated it with the front-end with Web Assembly.

This is the 7th post in the Start Rust focus series. Other posts include:

I've been using the JVM for two decades now, mainly in Java. The JVM is a fantastic piece of technology. IMHO, its most significant benefit is its ability to adapt the native code to the current workload; if the workload changes and the native code is not optimal, it will recompile the bytecode accordingly.

On the other side, the JVM automatically releases objects from memory when they are not needed anymore. This process is known as Garbage Collection. In languages with no GC, developers have to take care of releasing objects. With legacy languages and within big codebases, releasing was not applied consistently, and bugs found their way in production.

While GC algorithms have improved over time, GC itself is still a big complex machine. Fine-tuning GC is complex and depends heavily on the context. What worked yesterday might not work today. All in all, configuring the JVM for the best handling of GC in your context is like magic.

As the ecosystem around the JVM is well developed, it makes sense to develop applications using the JVM and delegate the parts that require predictability to Rust.

During the research for this post, I found quite a couple of approaches for JVM-Rust integration:

Integrating Java and Rust via JNI

From a bird's eye view, integrating Java and Rust requires the following steps:

Old-timers will have realized those are the same steps as when you need to integrate with C or C++. It's because they also can generate a system library. Let's have a look at each step in detail.

We first need to create the Java skeleton methods. In Java, we learn that methods need to have a body unless they are abstract. Alternatively, they can be native: a native method delegates its implementation to a library.

Next, we need to generate the corresponding C header file. To automate generation, we can leverage the Maven compiler plugin:

The generated header of the above Java snippet should be the following:

Now, we can start the Rust implementation. Let's create a new project:

Here's an abridged version of the API offered by the crate: 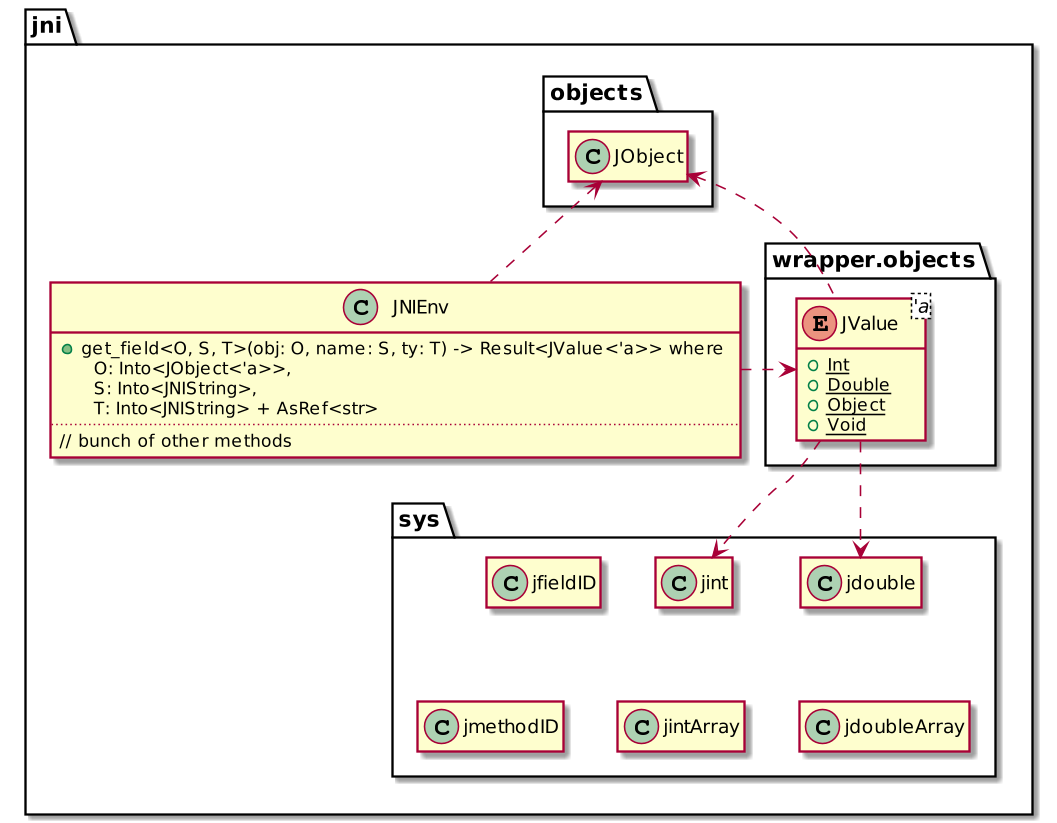 The API maps one-to-one to the generated C code. We can use it accordingly:

A lot happens in the above code. Let's detail it.

We can now build the project:

The build produces a system-dependent library. For example, on OSX, the artifact has a dylib extension; on Linux, it will have a so one, etc.

Use the Library on The Java Side

The final part is to use the generated library on the Java side. It requires first to load it. Two methods are available for this purpose, System.load(filename) and System.loadLibrary(libname).

load() requires the absolute path to the library, including its extension, e.g., /path/to/lib.so. For applications that need to work across systems, that's unpractical. loadLibrary() allows you to only pass the library's name - without extension. Beware that libraries are loaded in the location indicated by the java.library.path System property.

Note that on Mac OS, the lib prefix is not part of the library's name.

The above code is pretty simple: it involves a pure function, which depends only on its input parameter(s) by definition. Suppose we want to have something a bit more involved. We come up with a new method that multiplies the argument with another one from the object's state:

The native method looks precisely the same as above, but its name. Hence, the generated C header also looks the same. The magic needs to happen on the Rust side.

In the pure function, we didn't use the JNIEnv and JObject parameters: JObject represents the Java object, i.e., Main and JNIEnv allows accessing its data (or behavior).

In this post, we have seen how to call Rust from Java. It involves flagging methods to be delegated as native, generating the C header file, and using the jni crate. We have only scraped the surface with simple examples: yet, we've laid the road to more complex usages.