i'm not sure whether you've already heard about rxjs or reactive programming in general, but there's currently a very strong movement toward such a programming style in the modern javascript world, so you should definitely check it out. here we're going to take a look at a very specific part of rxjs 5, namely subject and replaysubject by implementing a simple publish/subscriber mechanism. (tl;dr: check out the screencast at the end)

so a couple of days ago i read this tweet: 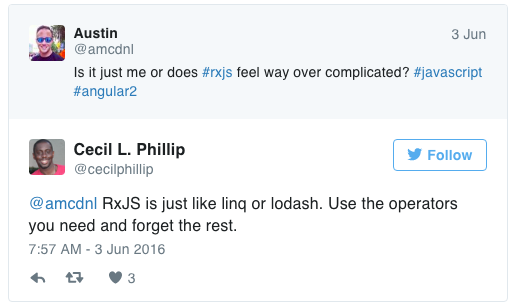 i totally agree, rxjs has a "learning cliff !" 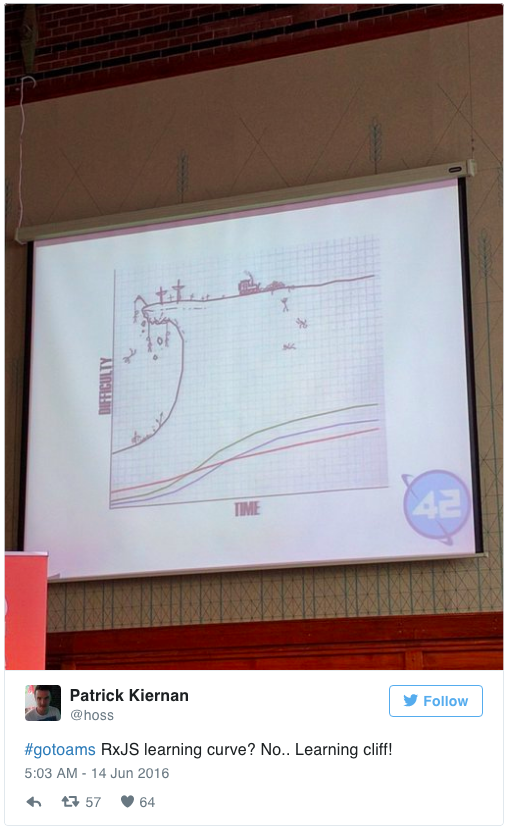 but, i think cecil’s answer is an awesome way to approach this initial complexity. take what you need, learn about it, use it, and move on. don’t worry about understanding everything at once (it’s overwhelming, i promise!). coming from the .net world, i remember when i first got in touch with linq , a querying language built into .net that allows you to write really powerful queries over collections, even over database objects (via appropriate adapters). it seemed so odd and complex, but once you grasp it, it’s just mind-blowingly powerful. i have the feeling the same holds for rxjs.

what i needed: a broadcasting mechanism

so, i had an angular 1.x application and needed a way for other (potentially lazy loaded) components to get notified about certain events happening within the application. like, whenever the user executes a search through the application’s search component, i want such modules to allow the user to subscribe to a “search event” and then get invoked with the search results.

angular 1? why don’t you simply use the $rootscope.$emit(...) as broadcasting mechanism? sure thing, that would totally work. but under the assumption that i’ll upgrade sooner or later to angular 2 , i’m trying to avoid the $scope as much as possible. also, it has other side effects as well.

rxjs is made for this, right? there’s a stream of data (my broadcast values), and there are so-called observables to which you can subscribe and get updated about new values. i always wanted to experiment around with rxjs on a concrete example, so it was time.

first things first. what is rxjs? what am i talking about?

rxjs is the javascript implementation of reactivex .

reactivex is more than an api, it's an idea and a breakthrough in programming. it has inspired several other apis, frameworks, and even programming languages. reactivex.io

it implements concepts from the popular observer pattern, iterator pattern, and functional programming. usually, using a reactive extension library consists of creating some kind of event stream , then combining/transforming those streams with query-like operators, and finally listening by subscribing to those resulting streams for performing operations. browse the official site for more details .

it was initially popularized by microsoft and published under the reactive-extensions github repository , containing various language-specific implementations. in fact, when you google for rxjs (the javascript implementation of reactive extensions), you most likely land on the github repo of rxjs 4 . recently, this library has been rewritten from the ground up with performance in mind—the result is rxjs 5 (beta) . the core contributor here is ben lesh , senior software engineer at netflix, which is a huge consumer of rx (and stands for everything performance related). 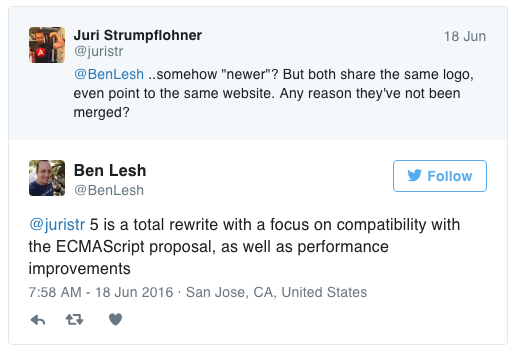 with angular 2, google also jumped onto reactive extensions. angular 2 makes heavy use of rxjs 5, for instance, the provided http library returns rx observables by default , rather than promises as you might expect.

also, twitter is an awesome source of information (at least for me). so if you want to get more on reactive programming, i recommend you to go and follow these guys:

rx.subject: “represents an object that is both an observable sequence as well as an observer. each notification is broadcasted to all subscribed observers.”

that sounds good for our broadcasting mechanism, right? we’re not so much interested in the “observer” part of the subject but in the fact it is an “observable sequence”. great, so let’s create a new instance of it.


from here you can start emitting new values using the next(..) function, like


now obviously someone needs to “listen” to these broadcasts and do something with these values. that’s what we call “subscribe.”

that was easy, right? obviously, we can broadcast any kind of value we need. great! but, now we’re going to make things a bit more interesting and realistic. our app subscribers may come and go at different times. so, i created a simple ui that allows us to simulate such behavior. something like this:


also, the subscribers are registered when the corresponding button is clicked:


by the way, addclicklistener is just a helper function i created.

note, if you just click the “broadcast value” button without registering a subscriber, nothing happens. once you start clicking a subscriber or two, they’ll start receiving the values and start printing them out.

can we also unsubscribe?

of course. subscribe() returns a reference on which we can invoke unsubscribe() .

what if i want to subscribe only to specific events

in a publish/subscribe environment, my modules in the application might only be interested in certain kind of events and not all of them. obviously, we could take them out in the subscribe(...) . but there’s a more powerful mechanism built into rxjs: lots of operators! we’re interested in the filter operation here.


if you’re using es6, it looks even cleaner:

“replaysubject emits to any observer all of the items that were emitted by the source observable(s), regardless of when the observer subscribes.” reactivex docs

interesting, let’s try that out. we do nothing else other than changing the subject with replaysubject :


now, in the example below, click the broadcast button a couple of times and then click on a subscriber button to register it. note that it’ll immediately start writing out values which have been published previously .

besides subject which is the most basic one and replaysubject , there exist also others like asyncsubject and behaviorsubject . simply google for examples on those.

we obviously only scratched the surface here. rxjs is extremely powerful, especially when combined with asynchronous data “flowing in from your apis.” it’s hard to get started initially, but i highly recommend you to play around with it, use my jsbins above, clone them, and experiment.

also, i’ve not yet tried it, but the above-described approach could be a very valid alternative for replacing angular 1.x’s $rootscope.$emit and $rootscope.$broadcast for broadcasting. that would further help to avoid using the $scope and prepare for a migration to angular 2. that's an idea for another post.

reactive programming in javascript with rxjs