like a lot of you folks, i also had the question, what is cloud computing? i started googling and downloaded a few tools and played with them and now understand a few concepts.

in this section i will be discussing one of the key concepts of cloud computing – platform as a service a.k.a paas a.k.a cloud platform. basically a cloud platform provides development support in a local environment, and deployment into remote environment and the cloud platform will “introspect” to which webserver/which database the application has to run. let me illustrate this with a diagram 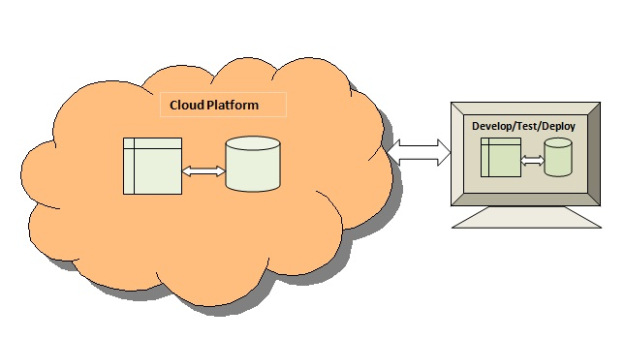 there are few leading players in this space, such as salesforce.com ( heroku , force.com ) and microsoft ( azure ). recently vmware entered into this space with their own cloudfoundry . coming from java background this is a good tool to understand the details of a cloud platform. it is well integrated with sts ide and it is bit buggy, but there are workarounds.

this section discusses about,

i will walk you through a simple example using spring mvc and mongodb , where you do a basic crud operation on person table. mongodb is a document based database, which is used to store large amount of data, this also has map/reduce capabilities similar to hadoop .

to quickly start on this,

webserver and database support : cloudfoundry supports springsource tc server, and it also supports jetty if used with maven. database side,it supports mysql, vpostgres and mongodb. it has the ability to introspect spring context file and understand which type of database application supports if you have a bean with type “org.apache.commons.dbcp.basicdatasource” and it can bind it to the respective database. if it is mongodb, it needs a mongo-db-factory as shown in this example.

database seed data population : typically if you have “jdbc:initialize-database” configuration in your application cloudfoundry will execute that script in its bound database.

configuration in the application:

if you want to deploy and run the application using vmc command line, you need to do the following,

if you want to deploy and run the application from sts ide, you need to do the following,

glue to inform the cloudfoundry about the database:

the key changes you have to make in your application to work with cloudfoundry,

glue to generate the dbschema and the seed data in cloudfoundry:

you can create a bean called initservice with a method init, and add all the seed data that is needed for the application as below,

in the bean context, define a bean as below,

other than these changes, everything else is same as any other spring mvc application.

way forward, you can get the cloudfoundry samples .  using git utlitiy you can clone this in your local machine. there is a simple hello-spring-mysql sample ; you can quickly understand how mysql based application works using this example.