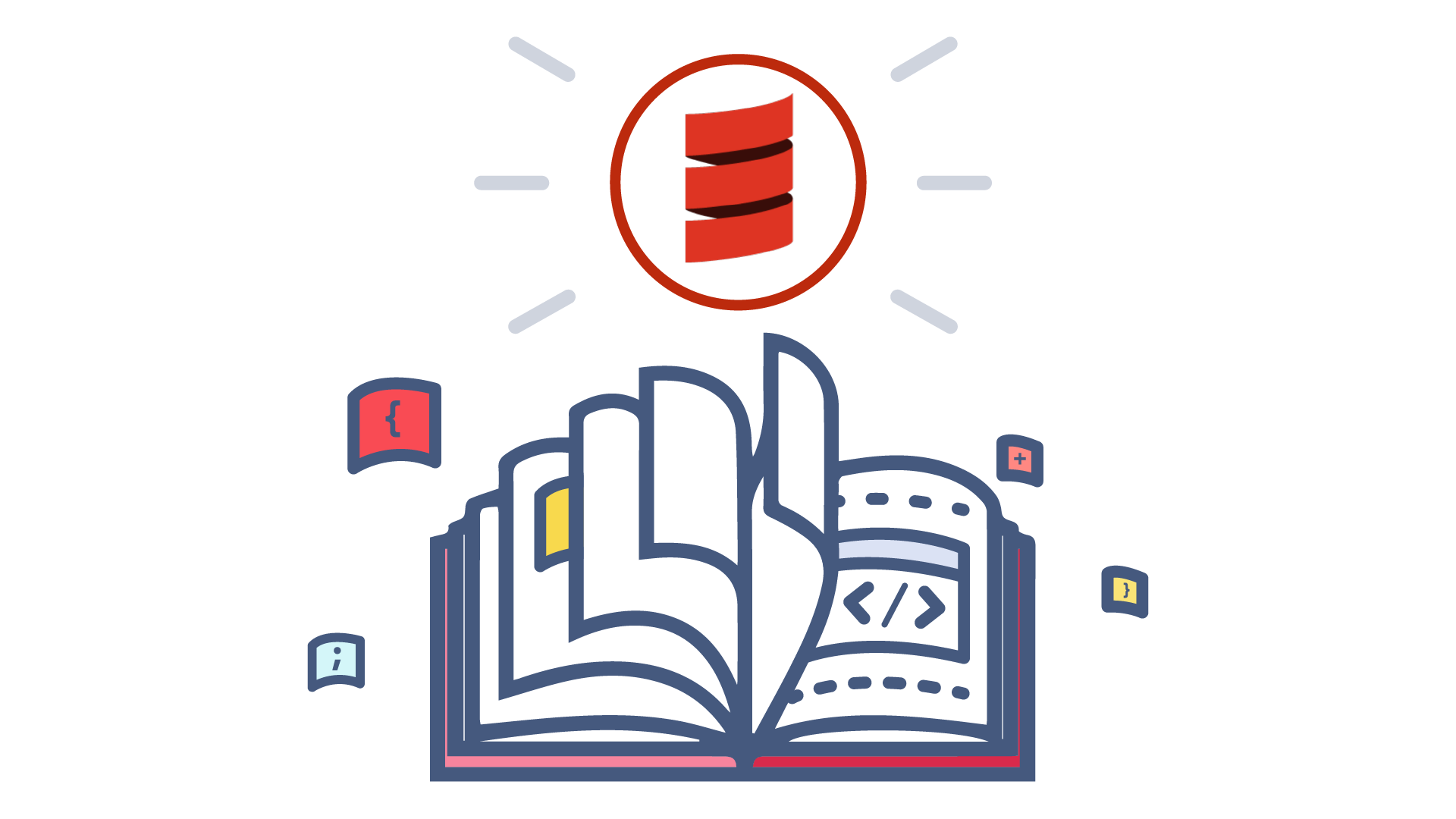 This series is all about the taste of Scala.
It is best suitable for all the newbies in Scala.

In the previous part, we covered:

This article will cover the object oriented nature of Scala language.

Scala has the same concept of a class as we have in other languages.

Classes in Scala are blueprints for creating objects. They can contain methods, values, variables, objects, traits and super-classes which are collectively called members.  Fields and methods are accessed with the dot operator similar to the other languages.

Also, all fields and methods of classes are public by default, unless we restrict their visibility with the private and protected modifiers. We don't have to specify public access modifier explicitly. 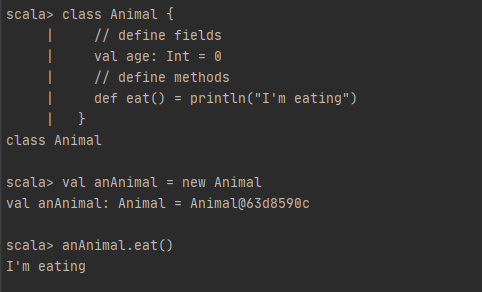 A minimal class definition is simply the keyword class and an identifier. The keyword new is used to create an instance of the class.

Classes in Scala can take arguments — those are the constructor arguments. When we define a class, we can also define its constructor signature.

Beware that constructor arguments are not class fields . Parameters without val or var are private values, visible only within the class. Thus the following code will generate error:

Thus in order to promote constructor arguments to class fields, we can put a val or var before the argument name.

To carry out Scala inheritance, we use the keyword extends: 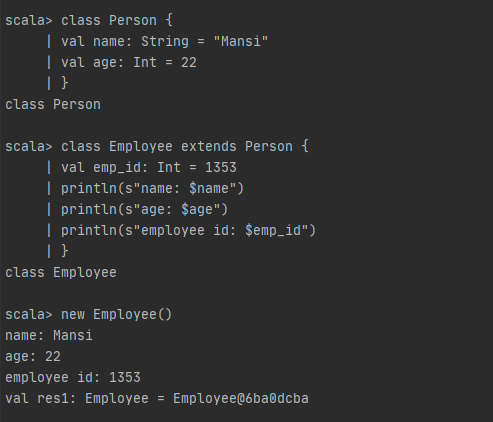 In the above example of two classes, Person class is base class or super-class and Employee class is derived class or sub-class. 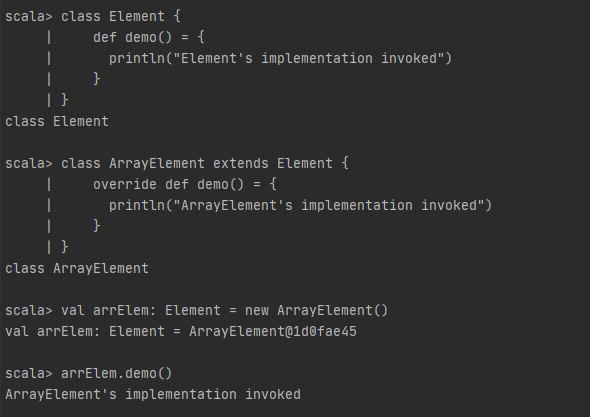 At compile time, compiler only knows that we are calling demo() method of Element object. But at run time, the most derived method i.e. demo() method of ArrayElement is called. A derived class can, of course, override their super class methods.

Scala also has a concept of an abstract class that is similar to Java’s abstract class, which contains both abstract and non-abstract methods and cannot support multiple inheritances.  They can't be instantiated as well.

To implement Scala abstract class, we use the keyword abstract against its declaration: 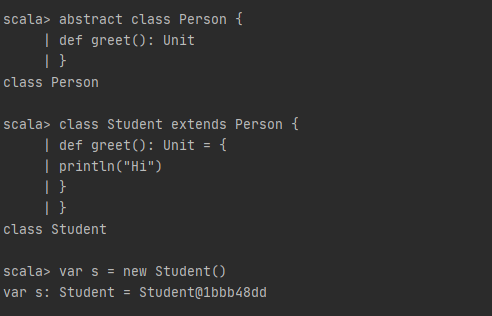 Traits in Scala are similar to Java’s Interfaces. Classes and objects can extend traits, but traits cannot be instantiated and therefore have no parameters.

Traits are like partially implemented interfaces. It may contain abstract and non-abstract methods. It is possible that all methods are abstract, but it should have at least one abstract method.

To define trait, we use the trait keyword:

Scala has single-class inheritance and multi-trait mixing. It is possible to extend any number of Scala traits with a class or with an abstract class. 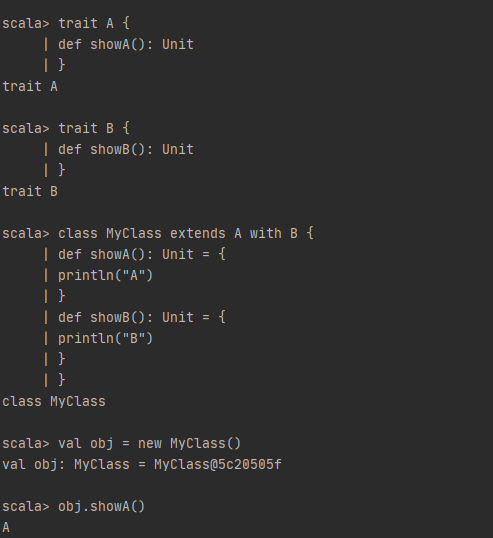 Scala also has the concept of anonymous classes much like Java.

We already saw how to  implement parent class’s declared methods. A less formal way to provide the implementation for a parent class’s methods is with an anonymous class, a non-reusable and nameless class definition.

To define a one-time anonymous class, instantiate the parent (and potentially abstract) class and follow the class name and parameters with curly braces containing the implementation.

The result is an instance that does extend the given parent class with a one-time implementation, but can be used like an instance from a traditional class definition.

With anonymous classes, the compiler does a lot of work behind the scenes. This allows us to abstract that complexity away from our code.

There is no idea of static in Scala, instead we have singleton objects.

An object is a class that has exactly one instance. It is created lazily when it is referenced, like a lazy val. The methods and fields declared inside singleton object are globally accessible, we don’t need an object to access them. We can import them from anywhere in the program. Also, we can’t pass parameters to its primary constructor.

A singleton object is declared using the object keyword:

A singleton object can extend classes and traits. It also provides an entry for program execution. Without such an object, the code compiles but produces no output. 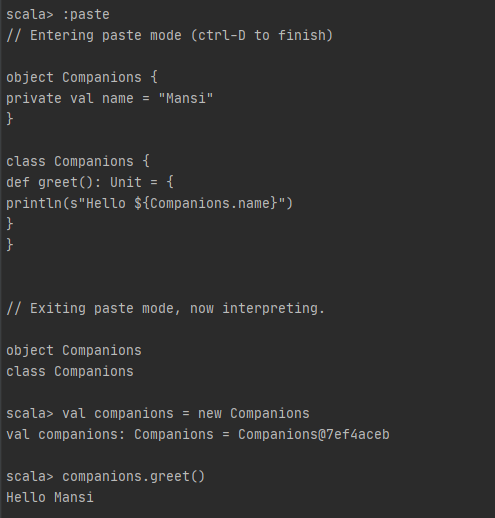 I have entered :paste mode here because I am working in the REPL. Since companions need to be in same source file, so :paste mode in REPL allows companions to be defined together.

static members in Java are modeled as ordinary members of a companion object in Scala.

Scala classes as well as Scala objects, both offer a default method that we name as the apply method. We sometimes call it an injector method. We can also invoke this method without a name. Let me show you what I mean:

Remember, apply is just a special function that lets us call the parent object directly, like a function. It has nothing to do with object orientation, classes, or constructors in the slightest.

We can use apply in companion objects as factory methods. The idea of the factory method is to construct class instances without new . 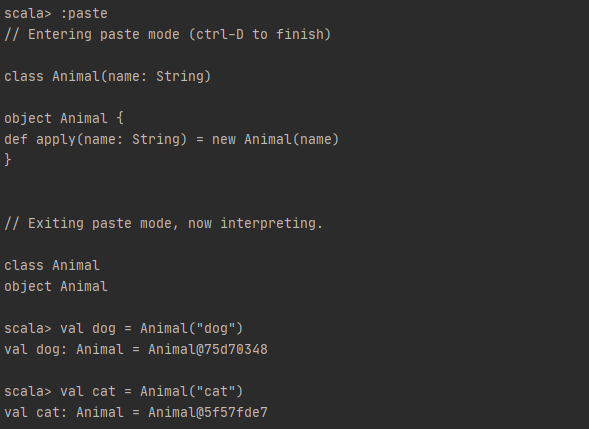 Scala case classes are like regular classes with a few key differences which we will go over.  When the compiler sees the case keyword in front of a class, it generates code for us, with the following benefits:

You may also like: Pattern Match Anything in Scala

Stay tuned for our next part of Scala Beginner Series where we will cover the functional nature of Scala. You don't want to miss it!

Published at DZone with permission of Mansi Babbar . See the original article here.