Almost all modern programming languages have a Future-Promise idiom for concurrent programming. I don't intend to bore you with why we need a higher level of concurrency abstractions. Instead, in this post, we'll cut to the chase and talk only about Scala's approach to Futures.

A scala.concurrent.Future is a representation of a value that is yet to be realized. This value is generally a result of a longer and/or parallel computation.

In crude terms, a block of code which runs synchronously, when wrapped in a Future runs asynchronously. All implementations of Future gives us a handle through which we can retrieve the resulting value of the computation of the block (or what's the point in it!).

In this post, we'll look at the basics of how to construct a Future and extract the value out of it through blocking wait and callbacks. In the next part, we'll talk about composing Futures and other advanced constructs such as recover and fallback for exception handling.

Creating a computation that runs asynchronously using Future is super easy. We just need to throw in our logic into the apply function of the Future

As an example, let's create a oneFuture that returns a 1 after a delay of one second.

Scala provides a ready-made static global ExecutionContext in scala.concurrent.ExecutionContext.global which we plan to use now. (More on this in a moment.)

The global ExecutionContext is very convenient to use. However, the underlying ThreadPool is a ForkJoinPool. Nothing wrong with this, and ForkJoinPool is amazing for short-lived computations but is strongly not recommended for Blocking IO such as database or webservice calls (or for that sake even long running computations or simply talking outside the JVM).

The good news is that we still can use Future but the workaround is to simply use a separate threadpool that is not ForkJoinPool - a fixed ThreadPool, for example, is a good option.

Before we go into the extracting the values out of Future, let's see what are the various states of Future and when and what value is actually available during those states.

The Future just has two states - Not Completed and Completed. 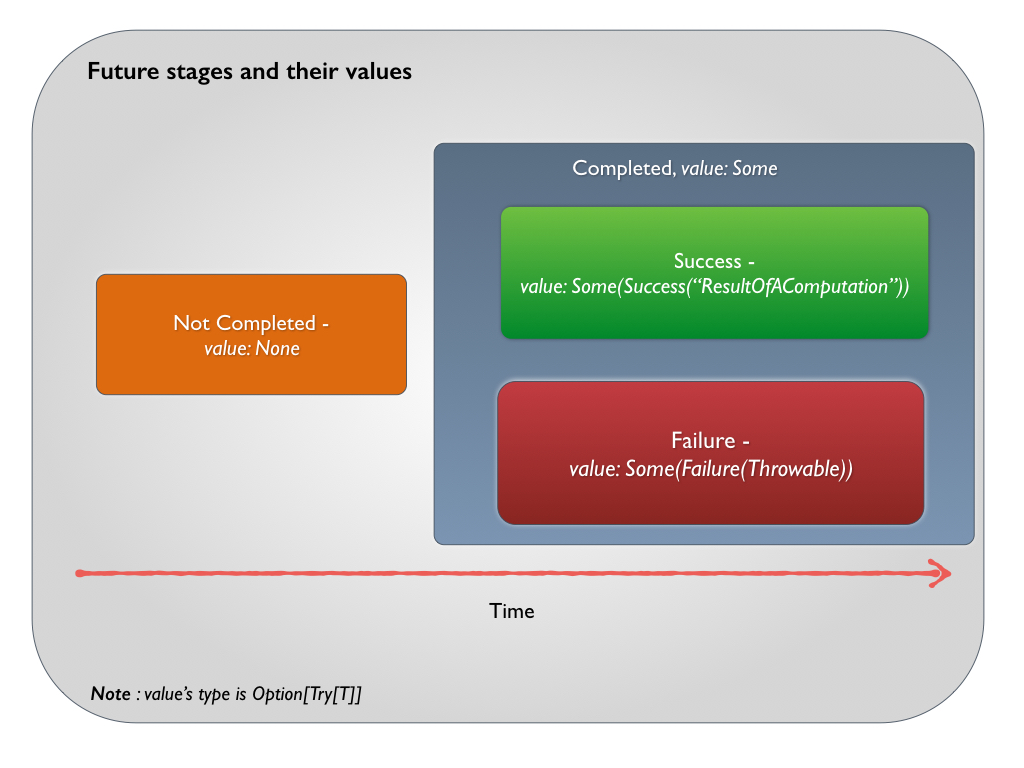 When given a computation, the resulting value that we could get from the Future is an Option[Try[T]].

Let's look at the Success case with an example

The time taken for the delayedStringFuture Future to complete is 1 second. So, we first check after 500 milliseconds whether the Future is complete and print its current value. The value function of the Future returns an Option[Try[T]]. Not surprisingly, we get a false for the isCompleted check and a None as the value itself.

Let's check back again after 1100 milliseconds giving some leeway after that 1000 millisecond sleep. The output now is the result of the computation itself and the completion status is true now..

Now that we've got that out of our way, let's see how to extract a value out of a Future

Other than composing futures, which we'll be seeing next week, there are two ways to extract just the value out of a Future - Blocking wait and callback

The scala.concurrent.Await's result function has the following syntax :

It accepts an implementation of the Awaitable trait, which a Future is. It also accepts a second parameter atMost which indicates the maximum time duration the caller thread has to block for the result. Upon expiry of the atMost duration, if the Future still didn't complete, then a java.util.concurrent.TimeoutException would be thrown.

Using Await.result in production code is highly discouraged but this construct comes in handy for running testcases against Future.

Let's consider two Futures, the original oneFuture and a oneDangerousFuture which throws an Exception.

Here's how they look :

We have three test cases here :

The alternative and the clean way to extract a value from the Future (other than composing) is by way of callbacks. There are three different callbacks available on the Future - the onSuccess, the onFailure and the combined onComplete.

Note that all callbacks return a Unit which means that they can't be composed and are side-effecting.

Now let's see how we could use the onComplete callback. I have this little method called printFuture which just writes to the console the contents of the Future once it is complete. Let's try to pass in both the oneFuture and the oneDangerousFuture into it.

Also, the "500 millis" in our example could be represented as "500 milli", "500 milliseconds" or "500 millisecond". The entire list of aliases for various time units could be found in the source code or Scaladoc of the trait DurationConversions.

The complete code backing this blog is available on GitHub.