Load testing is an important step in ensuring that your application can perform well under pressure.

There are a lot of services that offer load testing, for a fee. Doing high load high stress and/or long-running testing with these services is expensive.

I have used Load Impact before and it turns out to be quite expensive if you want to run large load tests with tens of thousands of concurrent users. And you need to learn their API to write large tests. The learning curve isn’t that steep, but it’s a curve none the less.

So, the second time around, I decided to look around for better alternatives. I’ve seen JMeter used in some of my previous engagements, so I decided to give it a try.

I liked it very much. It has a GUI interface with a lot of elements to write your tests. It even has a built-in distributed mode that will let you run distributed testing in master-slave mode. But the master node becomes a bottleneck when running a large number of slaves and is not well suited for large-scale distributed scales.

Then, I came across a service called Redline13. They offer a way to run JMeter tests on AWS — provided, of course, that you have one! It will automatically create the amount of on-demand AWS EC2 instances and run the JMeter tests on them. Once the tests are done, the on-demand instances are terminated.

The cost is only what Amazon will be charging you for the on-demand instance usage, which is quite cheap compared to the other load testing options I’ve come across. Reline13 also offers a bunch of other features and options for testing, but for now I’m only interested in the JMeter related functionality.

Let's get into a simple example to see how JMeter and AWS play together.

First, we need to create a JMeter test. Let’s stick to the basics for the purpose of this post. 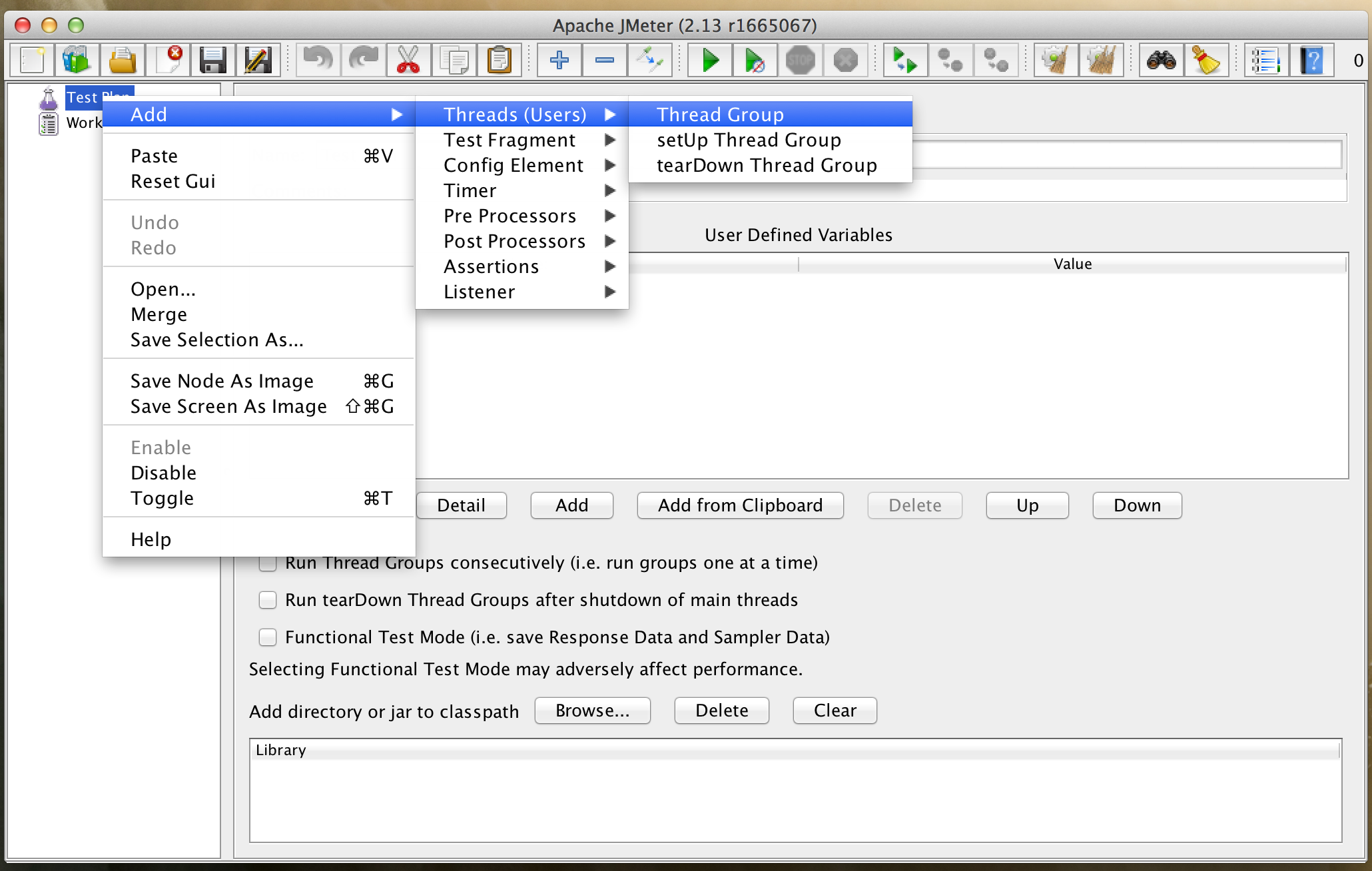 Let’s simulate 300 users over a five-second period. Each user will run the requests 10 times before stopping for good. There’s an option to run a user indefinitely if that’s what we want, but let’s keep things simple for now. Enter 300 for the number of users (threads), 5 (seconds) for the ramp-up period, and 10 for the loop count. In real-life scenarios, you will not be doing 10 requests rapidly without sleeping in between, but let’s keep things this way for this example. 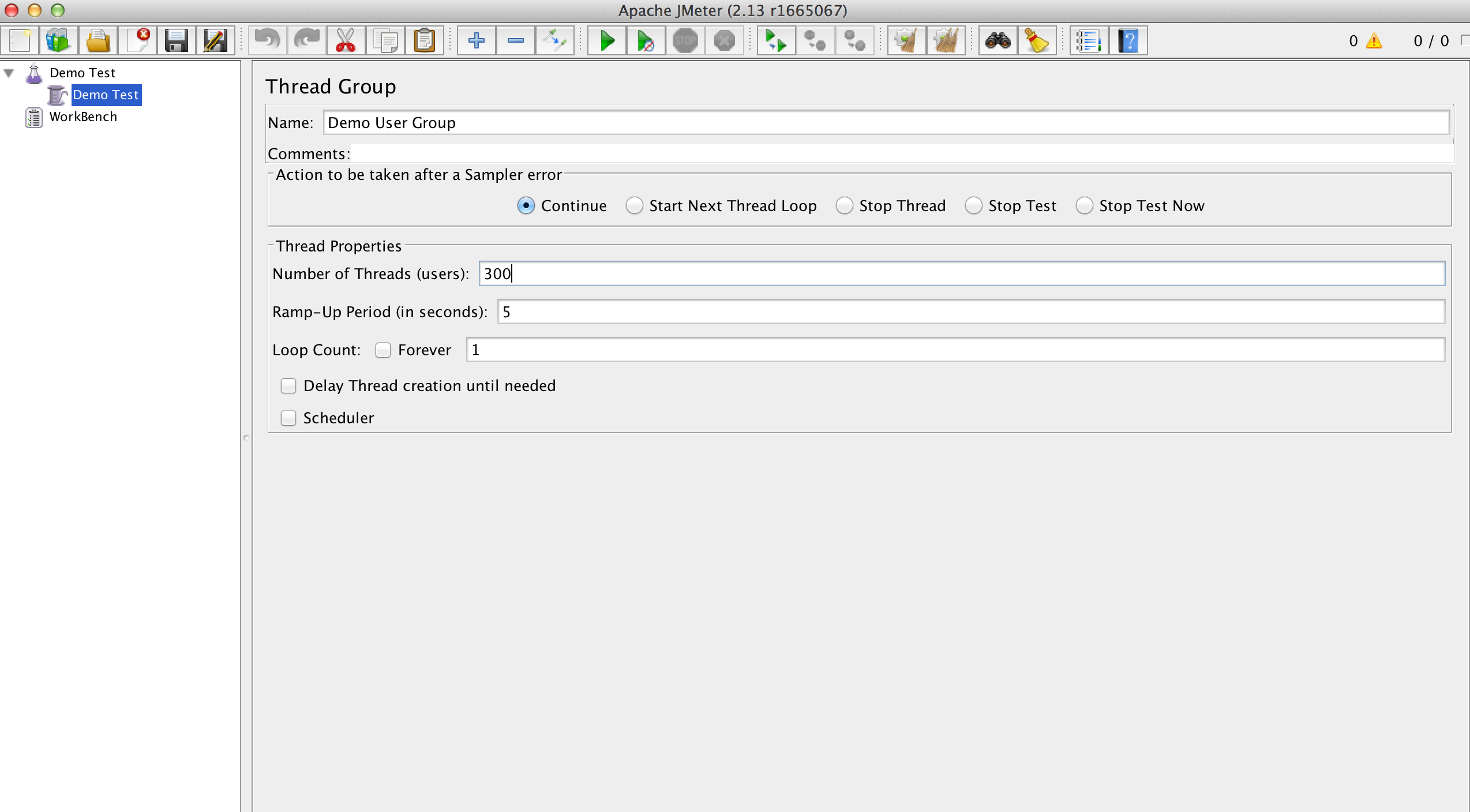 Create a simple GET request for a user. Right click on the Thread Group and select Sampler > HTTP Request. 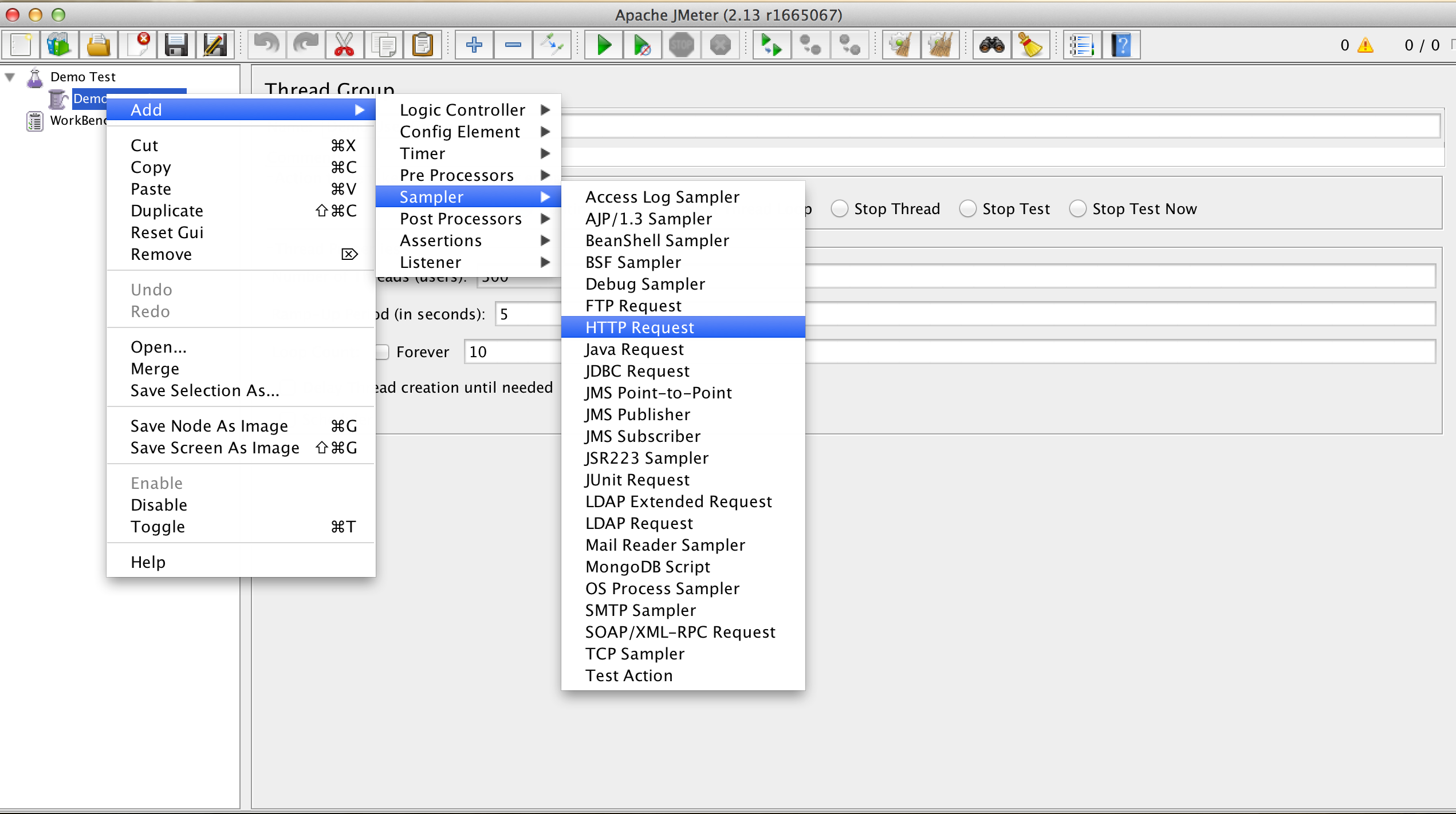 For the example, we will use http://jmeter.apache.org/. It’s a pretty simple page, and I’m sure Apache won’t mind the load since it’s the one used in their tutorials. Enter jmeter.apache.org in Server Name. You can also give an IP address. Select the client implementation — in this case, HttpClient4 — and finally, enter / as the path. 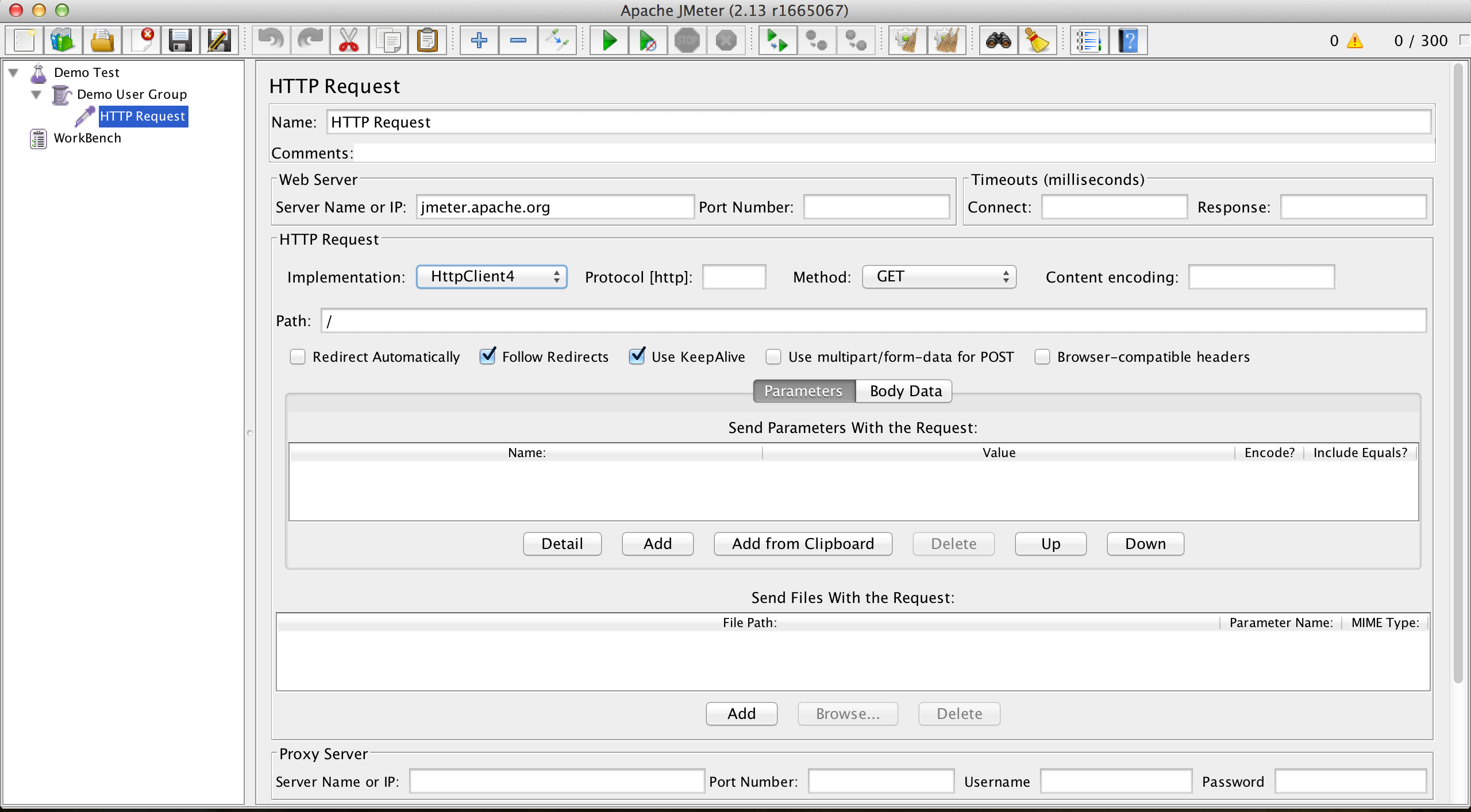 We will generally require a listener to be added. Listeners are how JMeter lets us collect results and metrics — but, they slow down the test processing time and are too much of a hindrance in distributed testing. So, we will not be including any listeners in this particular example.

You will need to register yourself first, and then link your account to AWS. The instructions can be found here.

Once the setup is done, you just need to start a new test by navigating to Home and clicking the Start New Test button. 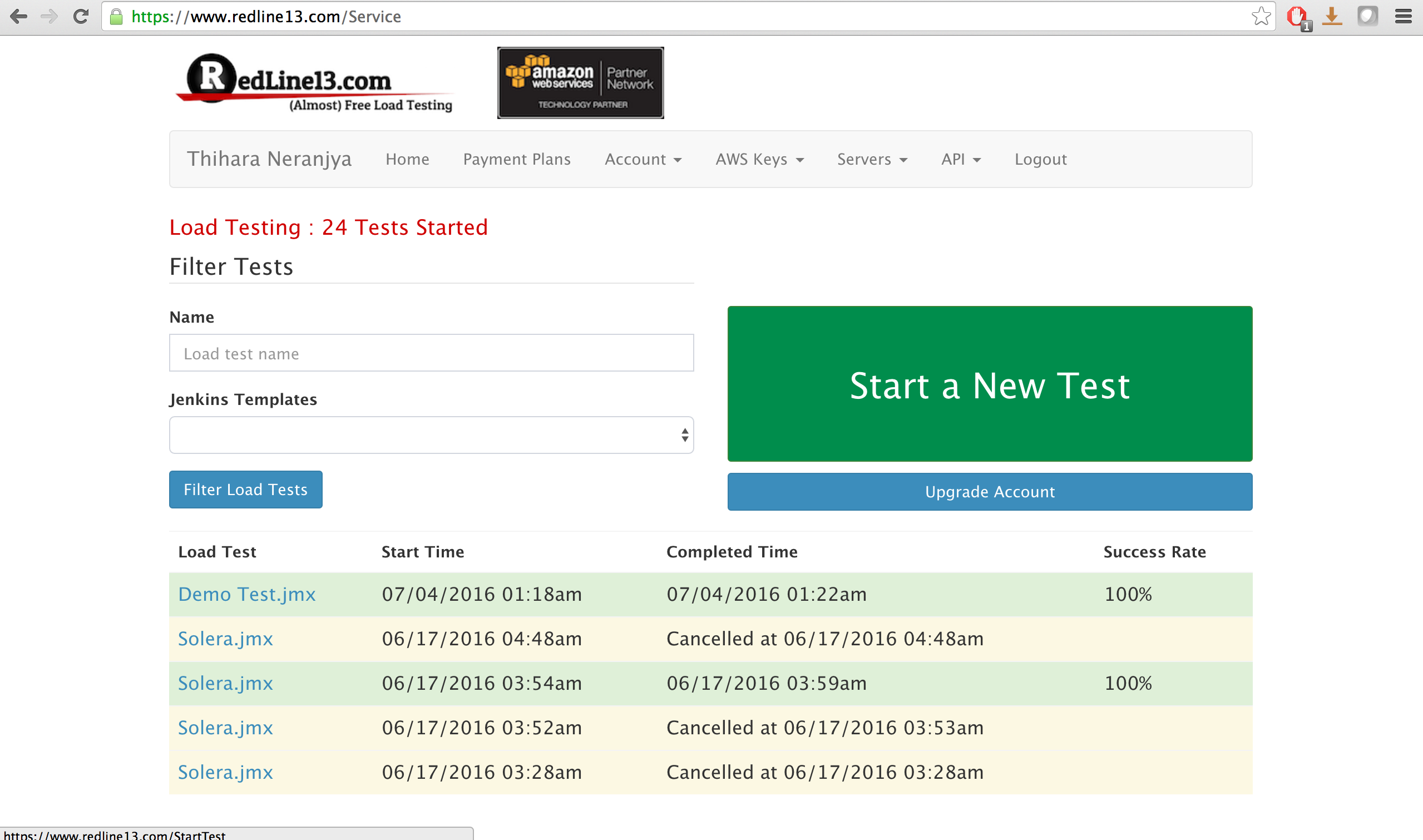 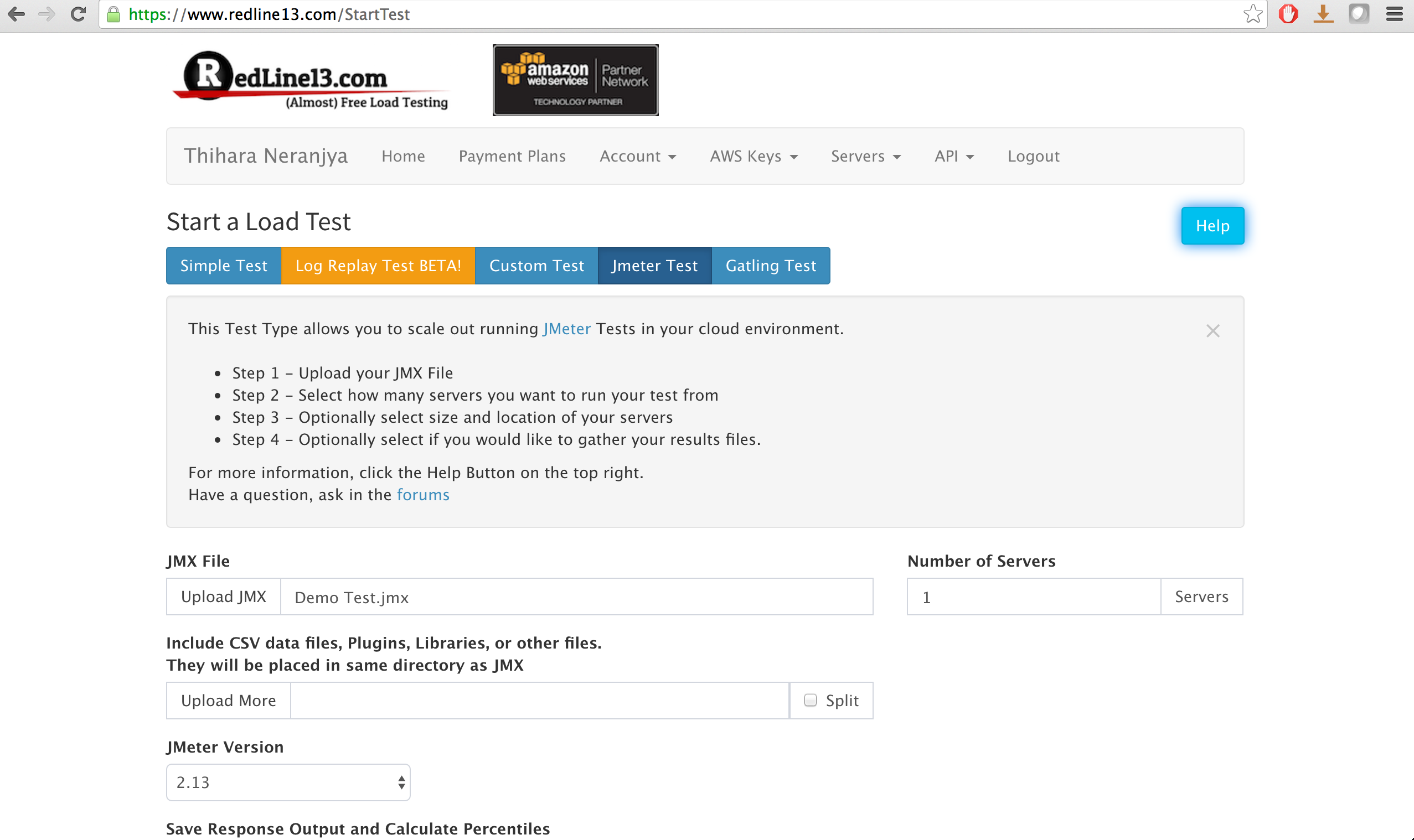 Run your tests and wait until they're completed.

There you go! The first distributed test has been run, and it’s very very cheap — about 3 cents USD.

You can run the test costs further down by using spot instances from AWS if you so wish to.

There are some metrics provided to us by Redline13. We get metrics like requests per second, average response time, bandwidth usage per request, and a bunch more JMeter and agent performance metrics.

However, I’ve found using tools that will clock the performance from the server to be a more accurate way to gauge server response times.

Keep in mind the load per each AWS instance. This depends heavily on the test written and how fast the server responds. A faster response time from the server means the tests will need to be run more quickly, consuming more CPU and limiting the concurrent number of users an instance can support.

For a real-life complex test planning an m3.large instance, it will probably support about 200-300 users, while simpler tests could scale to 500-600 concurrent users. You can also switch to more CPU-intensive tests into better-suited AWS instances to gain some performance increase.

You should also try to stay away from expensive operations like using a lot of listeners or writing results into files. This will let the tests scale much better.

Going with JMeter and AWS can save a lot of money when generating load to test your servers, and Redline13 provides a convenient way to use AWS for this purpose.

I’m definitely going to be using this option as opposed to the more expensive solutions from now on.

Published at DZone with permission of Thihara Neranjya. See the original article here.