Huya Live, China's Twitch, is one of the largest live streaming platforms in China. It mainly focuses on video game live streaming, covering 3,800 games. In addition, it offers a wide range of other live broadcasts, including traditional sports, cooking, music, beauty, outdoor, and reality shows. It has 178 million+ monthly active users. It operates globally as Nimo TV, with 30 million+ monthly active users.

At Huya Live, we use MySQL as our main database. As our business grew, our storage capacity became a bottleneck. We tried sharding, but it had many drawbacks. In Online Transactional Processing (OLTP) scenarios, our live broadcasts had high latency, and our database maintenance cost was high.

To solve these problems, we chose TiDB, an open-source, high-performance, distributed SQL database. Now, we use TiDB in real-time Online Analytical Processing (OLAP), database sharding, and big data offline scenarios. It helps us achieve database scalability, high availability, and strong consistency with low costs. In our big data offline application, our queries are 6x faster. In our near real-time OLAP application, our query performance improved by more than 2x.

I'll share our database challenges in this post, why we chose TiDB to solve our pain points, how we use it, and our future plans. I hope our experience can inspire you if you ever need to select a database.

We had many instances with 1 TB+ of data in order processing, private messaging, video-on-demand, payment, and other applications. This caused the data scalability issue. To solve this problem, we tried MySQL sharding based on applications. However, this solution was not ideal because:

Based on certain rules, we could archive our data, but this was only suitable for some specific application scenarios.

In OLTP scenarios, our live broadcasts had high latency. We hoped that:

After we separated reads and writes for MySQL-based applications, we faced the data consistency issue. We could use proxy middleware to solve it, but this did not work well.

In addition, our data processing pipeline for offline applications was long. Therefore, the overall maintenance cost was high, and the infrastructure was complicated.

The database should scale out and scale in easily according to our needs so that we didn't need to worry about our storage capacity.

The database system should be 99.99% available.

We had two requirements for database performance:

Why We Chose TiDB, a NewSQL Database

TiDB is an open-source, distributed SQL database that supports HTAP workloads. It is MySQL compatible and features horizontal scalability, strong consistency, and high availability. You can learn more about TiDB's architecture here.

We chose TiDB because:

Since TiDB 1.0 was released in 2017, it has constantly evolved. Its current version, 5.0, is a mature database, and it's increasingly complete.

It's Highly Compatible With MySQL.

We used MySQL to store data. TiDB is highly compatible with the MySQL protocol. Therefore, the migration cost is low, and we spent minimal time refactoring our applications.

It Has Low Costs.

In real-world cases, TiDB turns on high compression and uses three copies of the data by default. Compared to MySQL with dual copies, TiDB often has lower storage costs.

In addition, TiDB has a rich ecosystem, and it's easy to operate and maintain. It supports one-command scaling in or out, automatic high availability, and online data definition language (DDL). It has low usage costs in most scenarios.

TiDB uses Multi-Raft to ensure strong consistency. Data is strongly consistent across AZs in one city and in different cities for disaster tolerance.

It Has High Performance.

How We Use TiDB

Migrating From MySQL Shards to TiDB

In August 2019, to scale our databases and quickly respond to complicated queries for OLAP applications, we started to use TiDB 3.0 in some non-mission-critical applications.

Previously, we sharded our databases based on the day, kept data according to a certain strategy, and deleted historical data regularly. We also needed to analyze data in some OLAP scenarios. We had two issues:

After we introduced TiDB:

TiDB brings us these advantages:

Before we switched to TiDB, some of our scenarios (like an Oracle extract, transform, load) had tables with 100 million+ rows of data. When a huge table joined six or seven tables, we got millions of rows of data returned, and the execution time for some queries was more than one minute.

Our MySQL queries took an average of 14 seconds. After we migrated from MySQL to TiDB, the average query time dropped to two seconds. Queries were six times faster.

Our live broadcast and video application had these issues:

Previously, we deployed MySQL in a one-primary, multiple-secondary framework. Then, we migrated to the TiDB + TiFlash architecture.

After we switched to TiDB + TiFlash, we implemented data scalability, and our overall queries were more than two times faster.

Although MGR can solve the strong consistency issue to a certain extent, we now use a single-node write method. This is because multi-node write may cause data errors due to DDL and data manipulation language (DML) conflicts.

What's worse, our MGR cluster also faced the data scalability issue. We thought we needed to shard the database. This affected data merge statistics. MGR requires low network latency. Network latency or network jitters may cause MGR to frequently switch and the cluster performance to decrease. Therefore, we don't deploy the MGR cluster in different places. 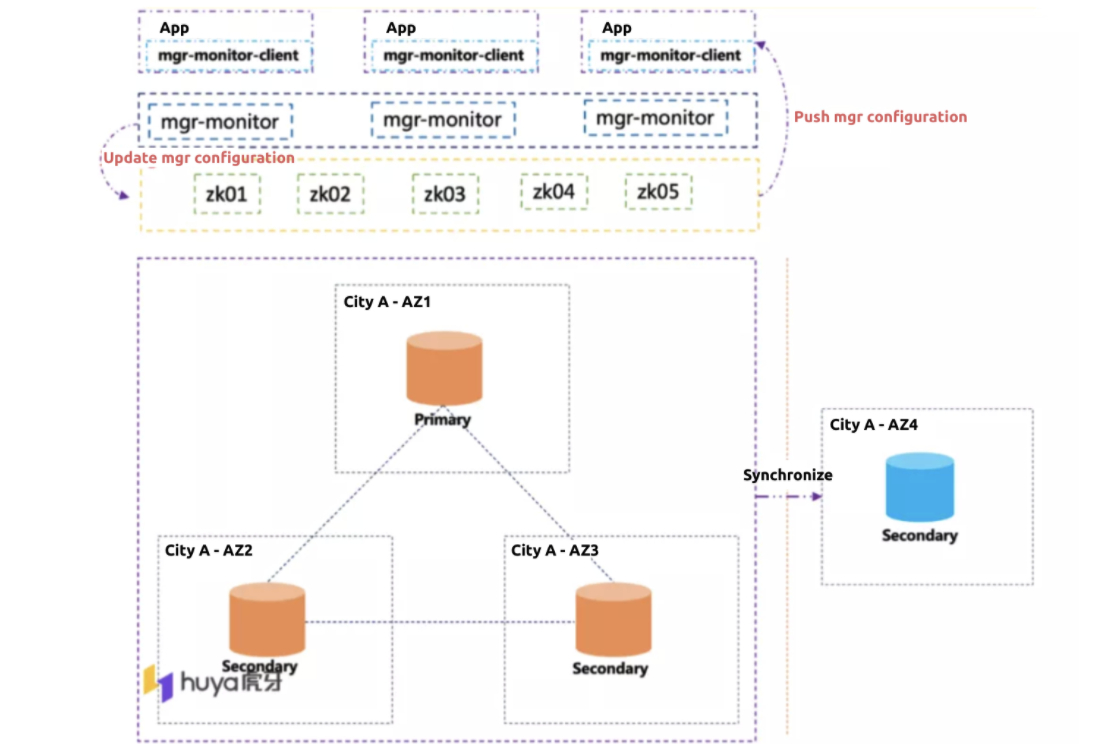 The MGR cluster at Huya Live

In addition, because MGR does not control flow well, it often jitters in large transactions. The MGR has a remotely deployed architecture with multiple data copies, and data cannot be compressed. The deployment cost is high.

TiDB 5.0 optimizes its cross-data center deployment feature. We're trying to port the MGR solution to TiDB. When we do, we'll be able to:

Now, we're using TiDB in real-time OLAP, database sharding, and big data offline scenarios. In the future, we hope that:

For live broadcasts, we hope to have a distributed database with these characteristics:

In the future, we hope that TiDB can allow users to independently choose the level of data consistency. For example, in non-strong consistency application scenarios, users can choose weak consistency to improve performance.

Live broadcasts, such as events or anchor birthday events, may have some unexpected traffic. We hope that the database can rapidly scale-out. For example, for read-only replicas, TiDB can quickly replicate multiple replicas to support the rapid rise of read traffic.

In addition, we hope data can migrate quickly and the write capacity can quickly scale-out.

If you want to know more details about our story or have any questions, you're welcome to join the TiDB community on Slack and send us your feedback.

Published at DZone with permission of hualiang huang. See the original article here.