toast notifications are, without any doubt, one of the most used techniques when it comes to notifying something to the user, even when the app isn’t running. it’s almost impossible not to miss a toast notification: it plays a sound, it’s displayed on the screen, it’s stored in the action center and, on the phone, it makes also the device vibrate.

you can learn more about the new features introduced in the universal windows platform regarding toast notification in the following blog post from the team: http://blogs.msdn.com/b/tiles_and_toasts/archive/2015/07/02/adaptive-and-interactive-toast-notifications-for-windows-10.aspx

in this post, i would like to focus on the ways you can send a toast notification, specifically on scheduled toasts, since you may find some challenges in implementing them in the proper way.

there are multiple ways to send a toast notification to the user:

the first step is to define the xml with the toast content. to learn how to define a toast, you can refer to the documentation and you can get some help using notifications visualizer , a windows store app by microsoft that is able to give you an instant preview of how a specific xml will be rendered. 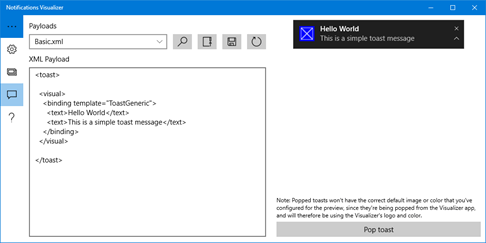 once you have the xml, you need to use it to create a xmldocument object by calling the loadxml() method and passing, as the parameter, the xml string. be aware that there are multiple classes called xmldocument in the universal windows platform: the one required by your scenario belongs to the windows.data.xml.dom namespace.

if you don’t like working with xml, you can use the notifications extensions library available on nuget and documented at:
http://blogs.msdn.com/b/tiles_and_toasts/archive/2015/08/20/introducing-notificationsextensions-for-windows-10.aspx

this library gives you a set of classes and methods to create notifications and, under the hood, it takes care of generating the proper xml for you. for example, here is how the previous code looks like using the notifications extensions library:

if you try the previous code on a phone and before the notification is displayed, you lock it by pressing the power button, you’ll realize that the notification won’t be displayed. as soon as you press the power button again to unlock the phone, you’ll see the notification appearing. what’s happening? the reason is that, by default, apps aren’t allowed to interact with the device when they’re locked, but they require a permission to do that. it’s a typical scenario when you work with background tasks: when you register a new task using the backgroundtaskbuilder class you define a code similar to the following one:

as you can see, the second scenario is the one we need also for our scheduled toast notification: without this approval from the os, we won’t be able to wake up the phone even if it’s locked. however, there’s a catch: the fact that we’re using scheduled toast notification doesn’t mean that we are necessarily using also a background task in our application. the problem is that, if we try to call the backgroundexecutionmanager.requestaccessasync() method without having a background task registered, we’ll get an exception. 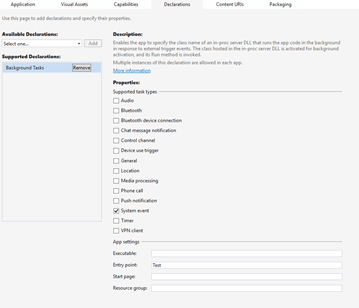 that’s all: the declaration in the manifest is enough for our scenario since it will allow the backgroundexecutionmanager.requestaccessasync() method to be executed without any error. now we just have to call this method when the app is starting, for example in the onnavigatedto() method of the page:

that’s all. now if you repeat the test of scheduling a notification and locking the phone before it’s displayed, you’ll correctly see the phone waking up and displaying the toast, like if it happens for regular push notifications.