For some reason having to do with the medieval French, the scoring system for tennis is very strange.

This is of course wildly confusing to newcomers. Fortunately, the convoluted logic is easy to express as a finite-state automaton (FSA): 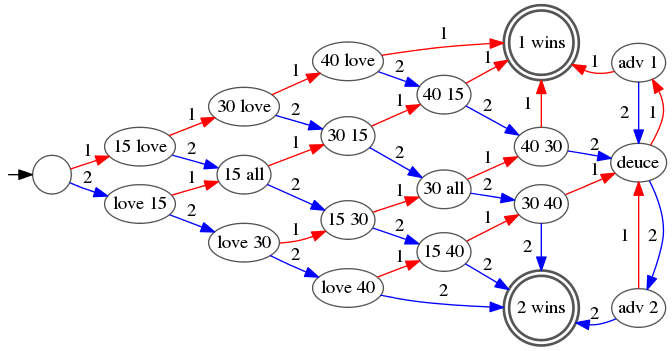 The game begins in the left-most (unlabeled) state, and then each time either player 1 (red) or player 2 (blue) scores, you advance to the corresponding state to know how to say the score properly in tennis-speak. In each state, player 1's score is first followed by player 2's; for example "40 30" means player 1 has scored 3 points and player 2 has scored 2 and "15 all" means both players have scored once. "adv 2" means player 2 is ahead by 1 point and will win if s/he scores again.

There are only 20 states, and there are cycles which means a tennis game can in fact go on indefinitely, if the players pass back and forth through the "deuce" (translation: game is tied) state.

This FSA is correct, and if you watch a Wimbledon match, for example, you'll see the game advance through precisely these states.

Yet for an FSA, merely being correct is not good enough!

It should also strive to be minimal, and surprisingly this FSA is not: if you build this Automaton in Lucene and minimize it, you'll discover that there are some wasted states! This means 20 states is overkill when deciding who won the game.

Therefore, there's no point in keeping those states, and you can safely use this smaller 17-state FSA (10% smaller!) to score your tennis games instead: 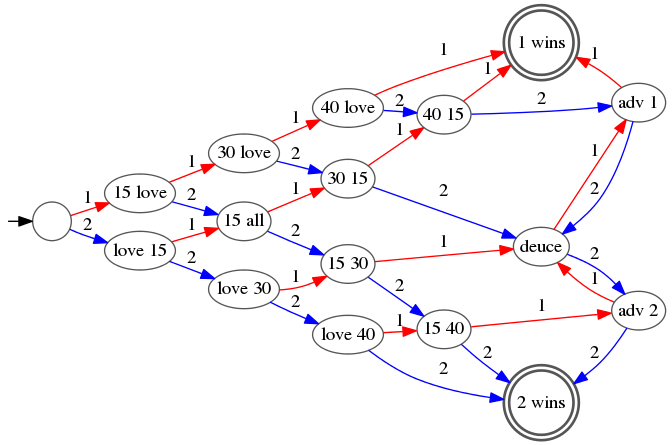 Once enough points (4 or more) have been scored by either player, their absolute scores no longer matter. All that matters is the relative score: whether player 1 is ahead by 1, equal, or behind by 1. For example, we don't care if the score is 197 to 196 or 6 to 5: they are the same thing.

Yet, early on, the FSA must also track the absolute scores, to ensure at least 4 points were scored by the winner. With the original 20-state FSA, the crossover between these two phases was what would have been "40 40" (each player scored 3 points). But in the minimal machine, the crossover became "30 30" (each player scored 2 points), which is safe since each player must still "win by 2" so if player 1 scores 2 points from "30 30", that means player 1 scored 4 points overall.

FSA minimization saved only 3 states for the game of tennis, resulting in a 10% smaller automaton, and maybe this simplifies keeping track of scores in your games by a bit, but in other FSA applications in Lucene, such as the analyzing suggester, MemoryPostingsFormat and the terms index, minimization is vital since saves substantial disk and RAM for Lucene applications!