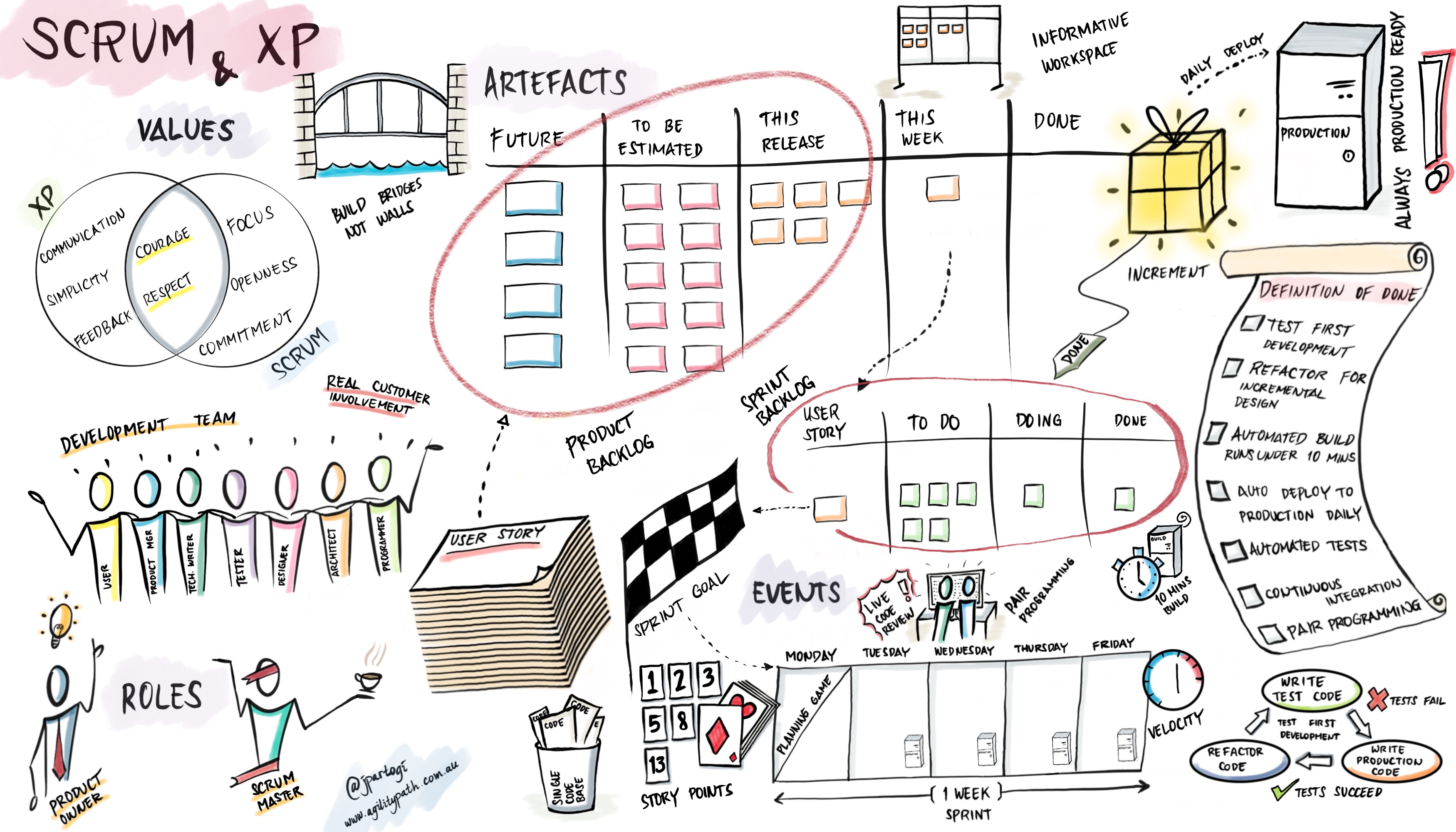 Hello, great people of the world. Welcome back to the Professional Scrum Developer (PSD) blog series with yours truly. It's been a while since my last blog on "Scrum And ...". This time I am going to discuss Scrum and eXtreme Programming (XP). I would like to discuss Scrum and XP because I often get the question, "When should I use Scrum or XP?" from people in the community. My natural answer to this question is that a professional Scrum team will use XP practices. Scrum teams who are religious in doing retrospectives will discover that they need to do XP practices if they want to go full steam in the future Sprints. You may also have heard on the street that "XP is Scrum with technical practices." Well, sort of. XP is not only about technical practices. Just like Scrum, XP is also about mindset and behaviors. We'll see why XP is not only about technical practices in this blog.

In this blog, I will fit XP into Scrum, and I will be using is the Scrum perspective. That means any Scrum elements that are not described here is because either XP does not have it or XP teams are doing it implicitly.

We will see throughout this article how many practices in XP exist because XP teams want to get as many and as frequent feedback as possible.

Respect is important in XP, too. Just like Scrum, XP values cross-functional teams. XP teams need to respect each other regardless of everyone's background and skills. XP also expect customers and executives to be working together with the team. Customers and executives who respect the team do not use their political power to get their personal agenda. If the customer and the executives don't respect the team, XP will simply not work. Just like Scrum, XP is also driven by a common goal.

The Product Owner is like the Project Manager plus the user in XP who is responsible to communicate the project to the stakeholders and also select which Product Backlog Item will the development team work on first. XP has a role called Product Manager who is responsible to fine tune the user story. At Scrum.org we prefer those who work as requirements engineers like the XP Product Manager to be in the development team rather than be the Product Owner.

Just like Scrum, XP values a "whole team" approach. What that means is that all skills that are required to turn the selected stories into a releasable software must be on the team. In, XP interaction designers and technical writers are also part of the XP team. If the software development requires database administration work, then the DBA needs to be on the team. Because XP values real customer involvement, the user is also part of the development team.

A Sprint in Scrum is not a release cadence but a planning cadence. Just like Scrum, in XP the iteration (Scrum sprint) is a planning cadence, not a release cadence. However, whereas Scrum allows you to choose the Sprint duration to be in one month or less, XP does not allow the iteration to be more than one week. XP requires the team to work at a sustainable pace, typically 40 hours a week. Scrum Team practicing XP will adjust the number of stories they pick per Sprint as they only work 40 hours per Sprint.

The accumulation of story points for every story completed during the Sprint is called the velocity. Just like Story Points are not part of Scrum, velocity is also not part of Scrum. During Sprint Reviews, the Scrum Team will calculate the velocity. For some teams using velocity is useful to forecast the future development and also to predict how many PBI the team gauge every Sprint Planning.

Scrum Teams practicing XP will have their increment deployed to production daily. While Scrum does not require the customer to be on-site, XP requires the customer on-site and continuously testing with the team. For Scrum Teams practicing XP, during the Sprint Review, the customer, Product Owner, and Development Team will review the product that is already in production. The Sprint Review will not be the first time the Product Owner and the customer has seen the product. Scrum Teams will assess what is possible for the next week Sprint based on what has already been delivered to production.

Many teams found that User Stories are helpful for them. Scrum Teams practicing XP will write some of their Product Backlog items in User Story but some PBI may be written in other formats that make sense to the team.

The common misconception people have about Scrum is that you can only deploy to production after the end of the Sprint. Scrum does not stop people to deploy to production more than once in a Sprint or even more than once in a day. The Sprint Review is not a phase gate or a User Acceptance Test (UAT) session, another misconception I have often found because many people think that a Sprint is just a mini-waterfall.

A Scrum Team practicing XP will write the test code first before they write the production code. Some managers and some developers find this practice is too expensive because developers will write twice or more the amount of code than they should. I will not discuss in detail about test-first development here as that will be another "[PSD series] Scrum And ..." blog content.

One-week Sprint, daily deployment to production, Test-First Development, ... hmmh it seems this XP thing is not really easy to do well.

Another XP practice that the Scrum Team will find valuable is the ten-minute build practice. XP requires the code to be integrated continuously and the build must run for under ten minutes. Yes, you've heard it right: the build must run under ten minutes. That is a non-negotiable rule from XP. When the build runs more than ten minutes, the developers may need to refactor their tests code, and developers are reluctant to continuously integrate their code. When developers are not continuously integrating their code, they will lose feedback. XP highly values feedback, and faster build means faster feedback.

Because XP requires continuous integration and daily deployment to production, XP requires the team to do trunk-based development. That means all of the code based will be in the trunk. This is quite different to what many teams are practicing right now where each developer codes in their own branches. In XP, code that lives in branches does not live for long. Code that lives in a branch for long will not be integrated more often which leaves integration problem until the end.

Scrum values transparency. Scrum does not dictate how you make that information transparent for everyone. In fact, Scrum allows you to use digital tools to manage the Product Backlog.

XP requires the team to have an informative workspace so anyone walking into the team room knows the progress of the development. XP teams may display the future work, the work for the next 3 months and the work in the current week on the wall. Scrum Teams practicing XP display their work in a physical board in the middle of the room.

Scrum does not require the whole team to sit together in one big room. Scrum works well for a remote team. The Sprint Retrospectives provides an opportunity for Scrum Team to inspect and adapt how remote teams improve the way they work together as a team.

Scrum Teams plan the functionalities they will develop in a Sprint during Sprint Planning. So when does the Scrum Team plans at a high level? Scrum is very focused on what is happening in the Sprint so Scrum does not say anything about planning at a high level. XP teams do quarterly planning or release planning every three months. During release planning, the customer will present what he/she wants to see in the next 3 months and the team will estimate at a high level. The customer uses the release planning to forecast the budget for the 3 months' development. The development team may forecast any skills they require for the next 3 months. Scrum Team practicing XP will find Release Planning practice valuable for them.

Well, there you go. Scrum and XP. At its core, the difference between Scrum and XP is subtle. Scrum is just a framework for product development, a container where you can add other practices. XP is one of those practices that you can do within Scrum framework. As you can see, there are no reasons why you should choose between Scrum And XP. I must say XP rules and practices are not easy and the majority of XP rules are non-negotiable. Adding XP into Scrum should be the next natural path for teams starting out with Scrum and striving to be a professional Scrum Team. From my experience, a Scrum Team practicing XP is a hyper-performing team. XP is one of the missing pieces Scrum teams need to deliver great quality products. Scrum and XP are well-aligned and complements each other well hence the question of whether to use Scrum or XP are irrelevant.