[this post is part of an ongoing challenge to understand 52 papers in 52 weeks. you can read previous entries, here , or subscribe to be notified of new posts by email ] 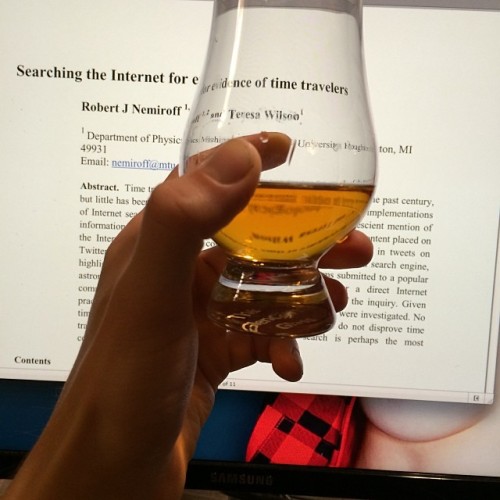 if you are a time traveler, please tweet #icanchangethepast or #icannotchangethepast on or before august 2013. or tweet about pope francis before april 2013, or about comet ison before september 2012.

the idea of time travel seems to have been around for nearly as long as humans can remember. first mentions reach as far back as the 9th century bc with the indian mahbharata, but until 1733 time travelers could only visit the future.

in 1733 samuel madden ‘s memoirs of the twentieth century introduced the idea of traveling into the past. nowadays most of our fictional time travelers can jump around whichever way they please. dr. who , i’m looking at you.

interestingly enough, time travel into the future is perfectly possible under special relativity . it’s even been demonstrated in practical examples using carefully calibrated clocks, putting some of them on a fast airplane, and observing that they drifted from a stationary clock by 10 -7 seconds.

traveling into the past is more controversial. special relativity does allow for it, but you’d have to be traveling at speeds faster than light. there are some theories on achieving this (gödel’s universe, black holes + wormholes, and circling cosmic strings) but they all suffer from problems involving local preservation of momentum and so on.

even if we could make a particle travel faster than light, transporting a whole person or machine would be a monstrous task. even going back just a few minutes would involve astronomical changes of momentum because of earth movement alone.

that said, we remain hopeful at some point in the future time travel will be solved. so much so that people have tried finding proof.

note to self: don’t recreate this experiment when feeling lonely.

obviously those advertising their presence can do so ineffectively, and those trying to hide it, could make a revealing mistake. this gives us a truth table with some 24 combinations, if my finger-based maths is correct.

either way, time travelers from the past are difficult to verify, so the authors focused on folks from the future.

the authors decided to search the internet for time travelers. simple as that.

rather than throw a party, hoping that somebody shows up, and introducing a bunch of issues regarding signaling and noise, you can scour the internet for evidence of time travelers. much easier than looking for time travelers themselves. more importantly, it’s a repeatable experiment.

you want to look for prescient information – knowledge of a popular event before said event occurred. a problem you run into is choosing events that are unambiguously referenced by a single label and that will stay relevant long enough for time travelers to still care in the future.

the authors chose two keyphrases to look for:

catholicism is currently the most popular sect of the most popular religion on the planet and papal histories have a well kept record. assuming this won’t change anytime soon seems reasonable. furthermore, there has never in history been a pope francis before march 2013.

bright comets are another type of well recorded event. smaller following, but no less fervent. comet ison is one such comet first discovered in september 2012. it is bright, awesome, and the term hasn’t been used for any other comet so far.

with the hopes of finding old posts on the internet and on social networks, and the assumption that the internet is still a thing in the future, the authors used various search methods to look for prescient content.

google plus turned out to be useless because it doesn’t order things well and isn’t comprehensive, facebook allows backdating, google had false positives because of new ads in old pages, and bing wasn’t able to filter by date.

twitter was the only service that allowed the authors to look through a comprehensive list of results between january 2006 and september 2013. there is also no backdating.

no prescient information was found.

there was a fascinating post where somebody essentially guessed that the new pope would be called francis, but after some examination the authors decided it was too speculative. bummer.

another venue the authors tried was searching for people searching for prescient information. a time traveler might come back from the future and google something about pope francis, perhaps not realising he doesn’t exist yet.

turns out search engines don’t really make that sort of information easily available so that was a bust. google trends exists, but it’s geared towards volume, and if a term has less than some 100 searches it won’t show up.

they tried their luck with search logs on a popular astronomy website, but nobody’s looked for comet ison before it was discovered. not a single soul.

with their three approaches – looking for evidence, looking for queries, and asking people to go back in time and post something for them to find – the authors came up empty handed. no evidence of time travelers has been found.

a rather unfortunate result, since we all know dr. who is real, right?

but really, this methodology has some issues. first being the choice of social media to look through, the keyphrases to use, and just the potential for time travelers to actually be good at hiding themselves. it’s a bit like looking for a needle in a haystack without knowing what the needle looks like or where to find the haystack.

that said, this is a marvelous idea for a repeatable experiment that could just be kept running. the authors promise to re-run their queries once in a while, but somebody should start a seti-like program for this.