Selenium is a popular automation testing framework that is primarily used for the cross-browser testing. It is open source and is ideal for automating testing of web applications across different browsers like Firefox, Chrome, Internet Explorer, Microsoft Edge, etc. Selenium has become a renowned framework and is giving stiff competition to other test frameworks like HP QTP (Quick Test Professional) and AKA HP UFT (Unified Functional Testing). This look at Selenium WebDriver will help you develop the basic understanding of the components of the Selenium suite, Selenium WebDriver architecture, and show you how to run automated tests for cross-browser compatibility.

Components of the Selenium Suite

Below are the core components of the Selenium Test Suite

For testing complex scenarios, Selenium Remote Control (RC) can be used. It is based on the client-server model which makes it possible to execute tests on the browser that is controlled by the server. There are client libraries in different programming languages which make it easy for developers to write effective test cases in a programming language in which they are comfortable and have expertise. Since version 2.25.0, RC has supported Java, C#, Python, Perl, Ruby, etc.

As mentioned earlier, the Selenium RC supports different browsers, unlike the Selenium IDE which is only available for Mozilla Firefox. The downside of Selenium RC is that it does not support record ad playback functionalities, which can be vital in the automation of test cases where tasks are repetitive, especially for regression testing. Before executing the tests using Selenium RC, an instance of the Selenium RC Server should be manually invoked and that instance should be running throughout your entire test cycle.

Serial testing is fine until you have to test code that is confined to a few browsers, operating systems, or devices. However, the testing methodology would falter once testing has to be formed in an environment that has multiple combinations. This is where parallel testing can be extremely useful since it can accelerate the whole testing process. Parallel testing can allow you to perform a similar test case across different test configurations, simultaneously. You could also simultaneously execute different test cases in the same browser.

Back to the basics. Selenium Grid is mainly used for parallel testing since it helps in running tests on different machines against different browsers and operating systems, simultaneously. It does the job in conjunction with Selenium RC. An example that showcases the usage of Selenium Grid is below:

Let’s have a look at each component in more detail.

As mentioned earlier, developers can use Selenium to write test code in different languages like C#, Java, Python, Perl, etc. The multi-language support is possible due to Selenium Client Libraries or Selenium Language Bindings. For example, if you are writing code in Python, you would require Python client libraries. Selenium Client Drivers for different programming languages can be downloaded from here.

JSON (JavaScript Object Notation) Wire Protocol facilitates the transfer of data between the client and server. It is a REST (Representational State Transfer)-based API. Each browser will have its own browser driver.

Browser Driver is mainly used for communicating with the browsers. Since the internal logic of the browser and its functionality is not revealed, Browser Driver ensures the necessary layer of ‘encapsulation’ in order to keep execution level details more abstract. Each browser has its corresponding Browser Driver. Please refer to the section titled 'Selenium WebDriver' in this post, which contains information about the location from where you can download the Browser Drivers. 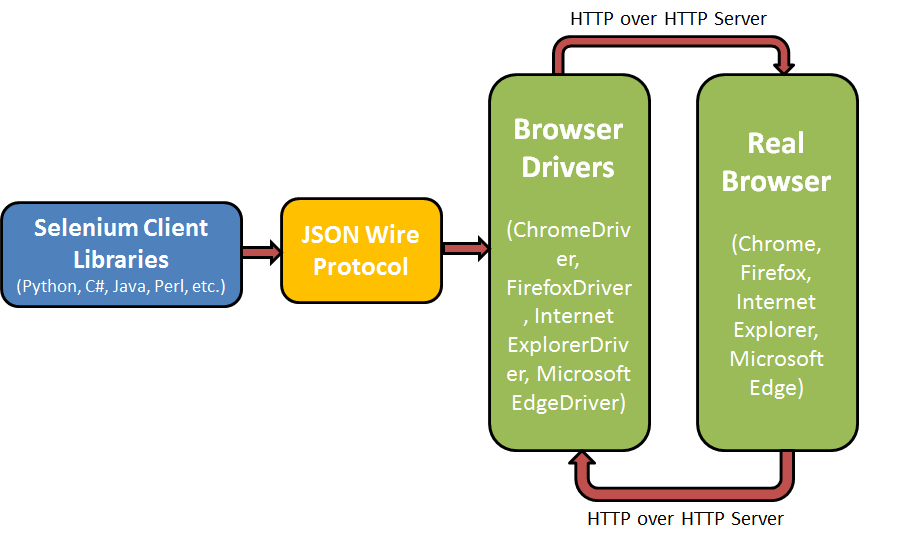 That's all for Part 1! Tune back in on Monday when we'll look at the Python code you need to implement Selenium across multiple browers.