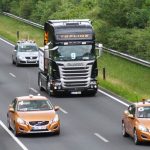 whilst consumer based driverless technology has grabbed a lot of the headlines, there has also been considerable progress made with driverless trucks and other commercial vehicles.  i wrote last year, for instance, about a project by royal trucks to work on automated crash trucks in florida.

a team from chalmers university of technology believe the next stage of driverless trucking will take its inspiration from the animal kingdom. they completed a demonstration on the dutch motorways in may as part of the grand cooperative driving challenge , which is an eu competition for autonomous vehicles.

a new kind of trucking

the volvo fh16 vehicle is being tested on the a270 motorway in the netherlands, and the team is attempting to break the mold with how trucks operate.

“traditionally, the aim has been to try to separate and differentiate all conceivable problems and tackle them using dedicated functions, which means that the system must cover a large number of scenarios. you can cover a large number of different cases, but sooner or later the unexpected occurs, and that’s when an accident could happen,” they say.

this approach requires the team to approach the truck as a completely new type of vehicle that is more like a biological organism than it is something technical and inert.

“biological systems are the best autonomous systems we know of. a biological system absorbs information from its surroundings via its senses and reacts directly and safely, like an antelope running within its herd or a hawk pouncing on its prey on the ground. before humans walked the earth, nature already had a solution, so let’s learn from that,” they continue.

the belief is that such a shift in approach is akin to when motorized transport replaced the horse 100 or so years ago. it involves the data collected by the sensors attached to the truck being treated in much the same way that we animals interpret our world. the team believes this enables the truck to be much more responsive than might otherwise be the case.

at the heart of this are a number of small behavioral blocks that instruct the machine on how to respond to stimuli rather than one larger block that aims to cover every eventuality.

see the truck in action via the video below.

“we are trying to design a system that adapts to whatever happens, without pointing to specific situations — and this is something that even the simplest animals can usually do better than existing vehicle solutions.”

the software, opendlv (which stands for driverless vehicle), is being developed as open source code and is freely available on the internet. through this, ola benderius and his project group hope that other researchers around the world can join the project by running and developing the software in their own vehicles. opendlv is intended to serve as an academic platform for researchers in many different scientific disciplines, such as vehicle engineering, adaptive systems, computer science and engineering, perception, neurology, and biology, where they can exchange knowledge about how autonomous vehicles should be made to enable their safe, large-scale introduction into society.