Self-organizing Maps (SOM), also known as Kohonen maps, are a type of Artificial Neural Network able to convert complex, nonlinear statistical relationships between high-dimensional data items into simple geometric relationships on a low-dimensional display. In a SOM, the neurons are organized in a bidimensional lattice, and each neuron is fully connected to all the source nodes in the input layer. An illustration of the SOM by Haykin (1999) is the following: 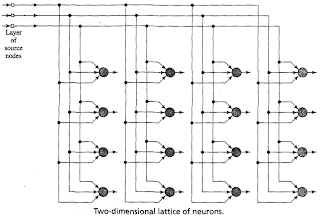 Each neuron n has a vector wn of weights associated. The process for training a SOM involves stepping through several training iterations until the items in your dataset are learned by the SOM. For each pattern x, one neuron n will "win" (which means that wn is the weights vector more similar to x) and this winning neuron will have its weights adjusted so that it will have a stronger response to the input the next time it sees it (which means that the distance between x and wn will be smaller). As different neurons win for different patterns, their ability to recognize that particular pattern will increase. The training algorithm can be summarized as follows:
We have that η(t) is called learning rate and that h(i) is called neighborhood function, which has high values for i and the neurons close to i on the lattice (a Gaussian centered on i is a good example of neighborhood function). And, when t increases, η also decreases, and h decreases its spread. This way, at each training step, the weights of the neurons close to the winning one are adjusted to have a stronger response to the current pattern. After the training process, we have that the locations of the neurons become ordered and a meaningful coordinate system for the input features is created on the lattice. So, if we consider the coordinates of the associated winning neuron for each pattern, the SOM forms a topographic map of the input patterns.

MiniSom is a minimalistic and NumPy based implementation of the SOM. I made it during the experiments for my thesis in order to have fully hackable SOM algorithm, and lately I decided to release it on GitHub. The next part of this post will show how to train MiniSom on the Iris Dataset and how to visualize the result. The first step is to import and normalize the data:

The snippet above reads the dataset from a CSV and creates a matrix where each row corresponds to a pattern. In this case, we have that each pattern has four dimensions. (Note that only the first 4 columns of the file are used, because the fifth column contains the labels). The training process can be started as follows:

Now we have a 7-by-7 SOM trained on our dataset. MiniSom uses a Gaussian as neighborhood function and its initial spread is specified with the parameter sigma. With the parameter learning_rate we can specify the initial learning rate. The training algorithm implemented decreases both parameters as training progresses. This allows rapid initial training of the neural network, which is then "fine tuned" as training progresses. To visualize the result of the training, we can plot the average distance map of the weights on the map and the coordinates of the associated winning neuron for each pattern: 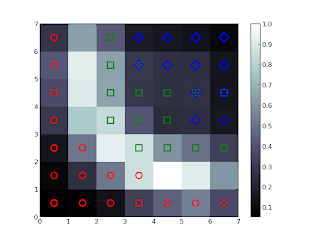 For each pattern in the dataset, the corresponding winning neuron has been marked. Each type of marker represents a class of the iris data (the classes are setosa, versicolor and virginica and they are respectively represented with red, green and blue colors). The average distance map of the weights is used as background (the values are showed in the color bar on the right). As expected from previous studies on this dataset, the patterns are grouped according to the class they belong to, and a small fraction of Iris virginica is mixed with Iris versicolor.

For a more detailed explanation of the SOM algorithm you can look at its inventor's paper.