Software is constantly changing — the moment it is released, it begins to grow obsolete. Users need a constant stream of patches and want new features. At the same time, people hate when an update introduces a breaking change, especially when they were not warned about it.

Every one of us has done this.

What Is Semantic Versioning?

Semantic versioning is a versioning scheme aiming to communicate the compatibility level between releases at a glance. It uses a three-part numbering system: major.minor.patch (e.g. 1.2.3). And is sometimes suffixed with special identifiers such as -alpha or -rc1.

Each part has a different meaning:

A developer can quickly assess the risk of upgrading by comparing version numbers. Major releases are risky and should be planned carefully. Minor and patch-level changes have a much lower chance of introducing incompatibilities and are safer to install.

How do we determine the version number in a semantic versioning scheme? It's a tricky question since a typical release includes dozens of commits. Some contain bug fixes, while others may introduce breaking changes. In such a scenario, the only way to determine the appropriate version is by reviewing each commit individually and assessing the impact. If it sounds like a lot of repetitive and error-prone work that's best done with some automated tool, you're right.

Semantic-release is a versioning tool capable of computing semantic version numbers by reading commit messages. It can also generate release notes and publish packages to GitHub and NPM.

The header is the only mandatory part of the message and should be formatted like this:

The most important component of the header is the type, which helps semantic-release assess the importance of the changes introduced in the commit. The default behavior follows Angular's message format:

Regardless of the header type, if the body of the commit message contains the string BREAKING CHANGE or DEPRECATED, semantic-release performs a major version increase.

To clarify, let's look at a few examples and their effects:

How to Get Started With Semantic-Release

While semantic-release is a Node-based application, it supports any language, not just JavaScript or TypeScript. You'll need to have Node and NPM installed to use it, though.

To add semantic releases to your project, follow these steps:

You can customize the tool's behavior by creating a .releaserc or release.config.js file in the project's root. This will allow you to tweak the commit message format, safelist the branches capable of triggering a release, and enable optional plugins. For more details, check the configuration docs.

In this section, we'll configure a CI/CD pipeline to perform semantic versioning. I assume you have installed semantic-release and already have a continuous integration pipeline.

Semaphore triggers CI builds on all branches and Git tags by default. The problem with this behavior is that semantic-release creates and pushes a tag on every new version. So, if we don't disable (or safelist) tags on Semaphore, the tool’s release may trigger secondary (and useless) CI/CD runs.

Change the build settings by opening the Semaphore project settings and scrolling down to What to build?. Ensure the tags option is unchecked. 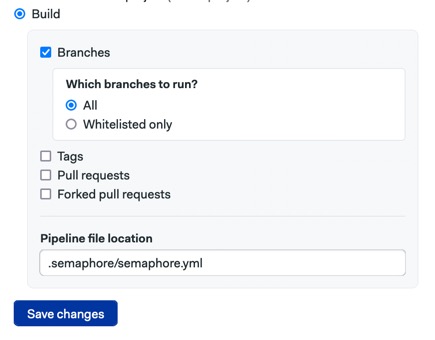 Do not trigger CI builds on Git tags.

Semaphore will publish releases to GitHub and NPM on your behalf. So, it needs access to your authorization credentials, which we'll store using a secret.

Set Up a Continuous Delivery Pipeline 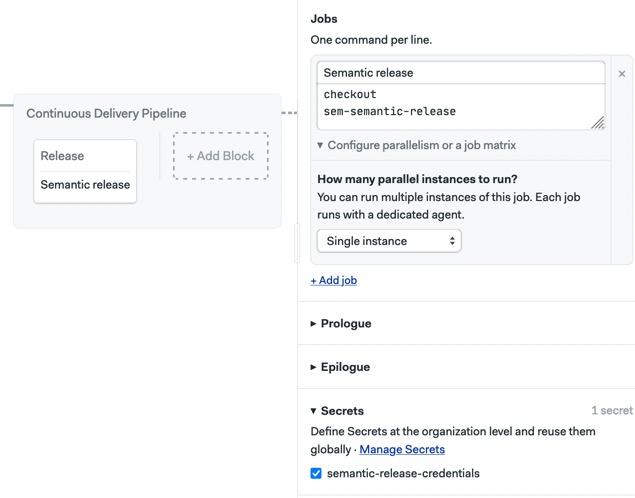 This setup will execute semantic-release on each commit or merge into the master branch. Depending on the content of the commit messages, the tool might bump the version numbers and publish the release.

Executing sem-semantic-release in the CI environment exports special information about the release. For instance, you can determine if a release occurred by executing sem-context get ReleasePublished in a later job.

We can use these details to perform more advanced workflows or continuous deployments. Let's say we want to build a Docker image and tag it with the release number. We can use a command along these lines for that:

Maintaining consistent version numbers will help you gain the trust of users and other developers. Simple projects may only require manual versioning, but highly active codebases with several contributors won't tolerate this. The only sensible alternative is to automate the release chores and remove the human element from the middle with a tool such as semantic-release.

Happy releasing, and thanks for reading!