the software development discipline of continuous delivery has had a tremendous impact on decreasing the cost and risk of delivering changes while simultaneously increasing code quality by ensuring that software systems are always in a releasable state. however, when applying the tools and techniques that exist for this practice to serverless application frameworks and platforms, sometimes existing toolsets do not align well with these new approaches. this post is the first in a three-part series that looks at how to implement the same fundamental tenets of continuous delivery while utilizing tools and techniques that complement the serverless architecture in amazon web services (aws).

here are the requirements of the serverless delivery pipeline:

what exactly is a serverless platform? obviously, there is still hardware at some layer in the stack to host the application. however, what amazon has provided with lambda is a platform where developers no longer need to think about the following:

in summary, a serverless platform is one in which an application can be deployed on top of without having to provision or administer any of the resources within the platform. just show up with some code, and the platform handles all the ‘ilities’ . 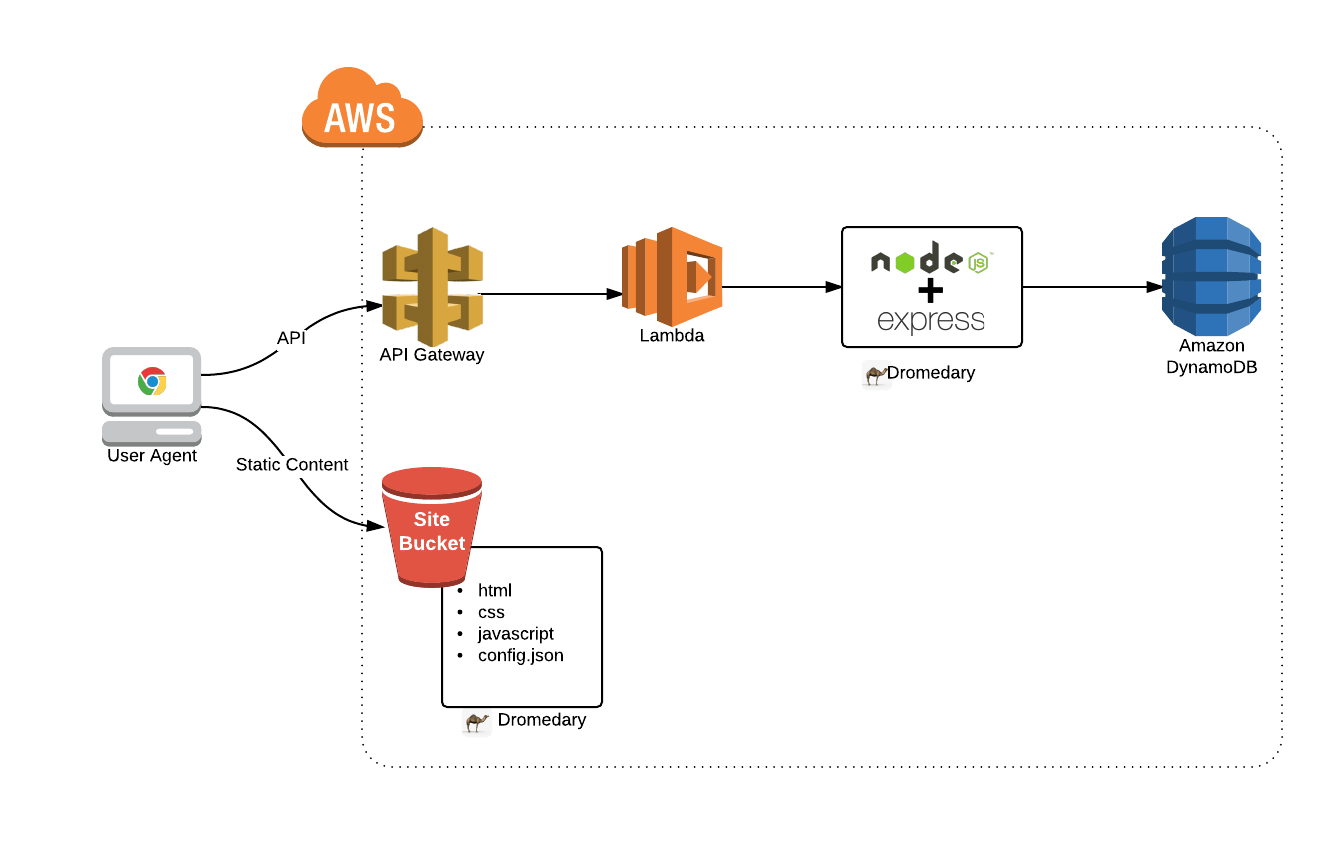 the diagram above highlights the components that are used in this serverless application. let’s look at each one individually:

the diagram below compares the pricing for running a node.js application with lambda and api gateway versus a pair of ec2 instances and an elb . notice that for the m4.large, the break even is around two million requests per day. it is important to mention that 98.8% of the cost of the serverless deployment is the api gateway. the cost of running the application out of lambda is insignificant relative to the costs in using api gateway. 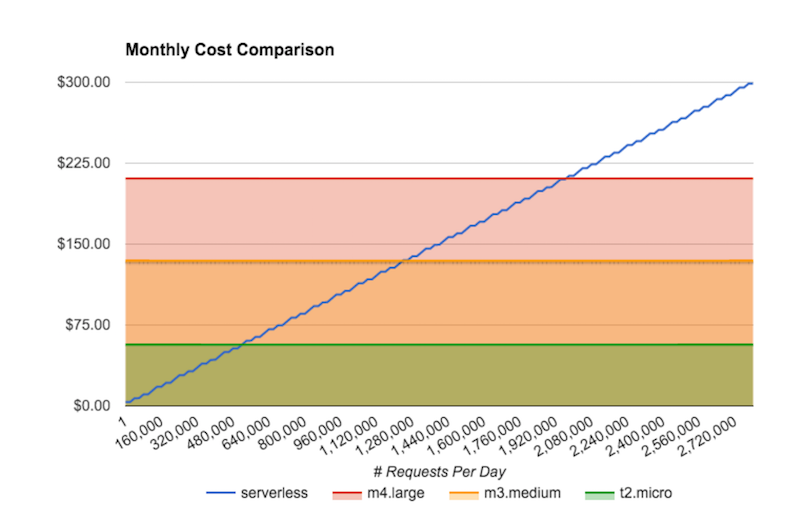 this cost analysis shows that applications/environments with low transaction volume can realize cost savings by running on lambda + api gateway, but the cost of api gateway will become cost prohibitive at higher scale.

what is serverless delivery? 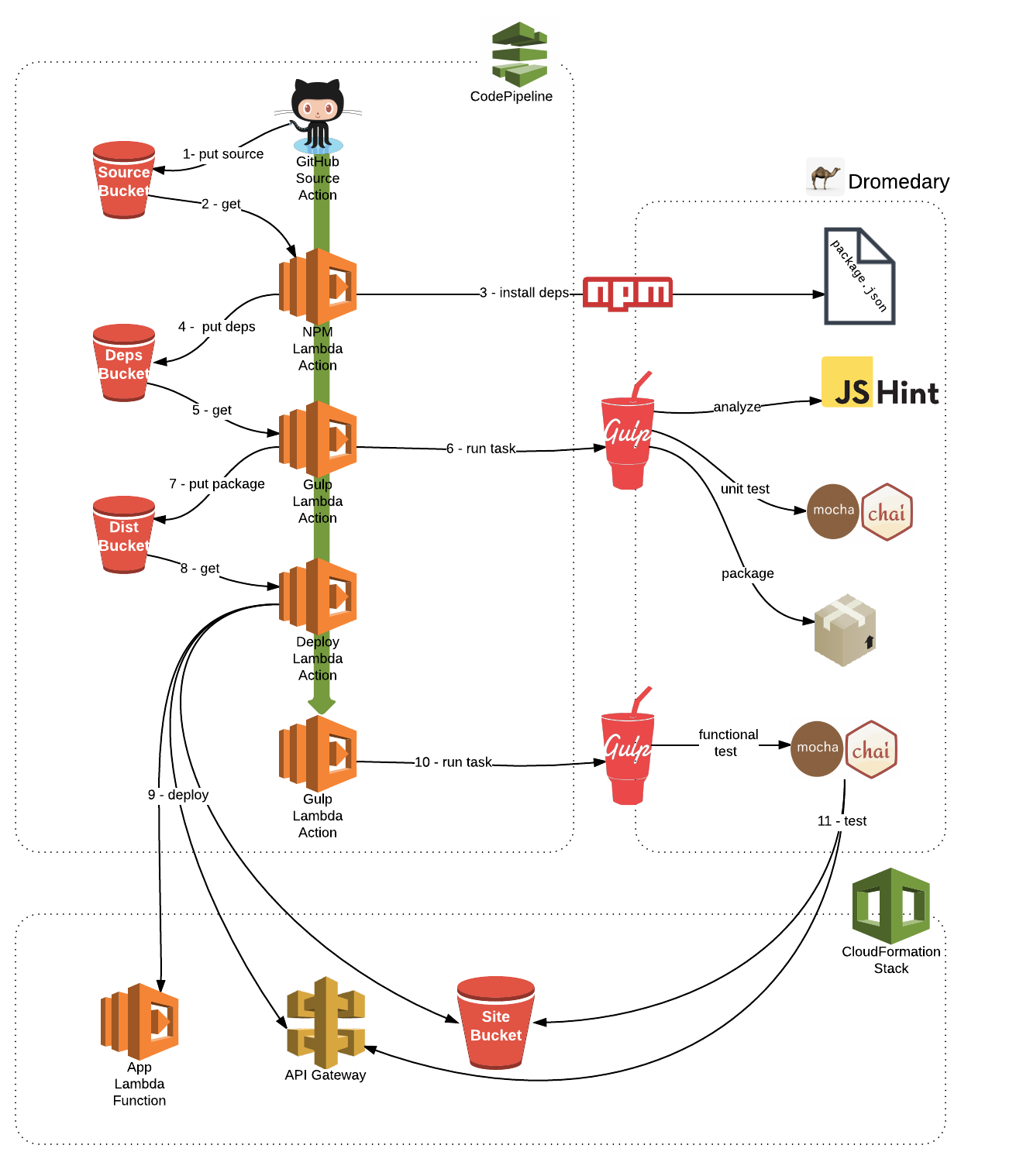 the diagram above shows the technology used to accomplish serverless delivery for the sample application. let’s look at what each component provides:

although this serverless delivery architecture could be applied to more traditional application architectures (e.g., a java application on ec2 and elb resources) the challenge might be having pipeline actions complete within the 300 second lambda maximum. for example, running maven phases within a single lambda function invocation, including the resolving of dependencies, compilation, unit testing, and packaging would likely be difficult. there may be opportunities to split up the goals into multiple invocations and persist state to s3, but that is beyond the scope of this series.

the pricing model for lambda is favorable for applications that have an idle time and the cost grows linearly with the number of executions. the diagram below compares the pricing for running the pipeline with lambda and codepipeline against a jenkins server running on an ec2 instance. for best performance, the jenkins server ought to run on an m4.large instance, but just to highlight the savings, m3.medium and t2.micro instances were evaluated as well. notice that for the m4.large, the break even happens after you are doing over 600 builds per day and even with a t2.micro, the break even doesn’t happen until well over 100 builds per day. 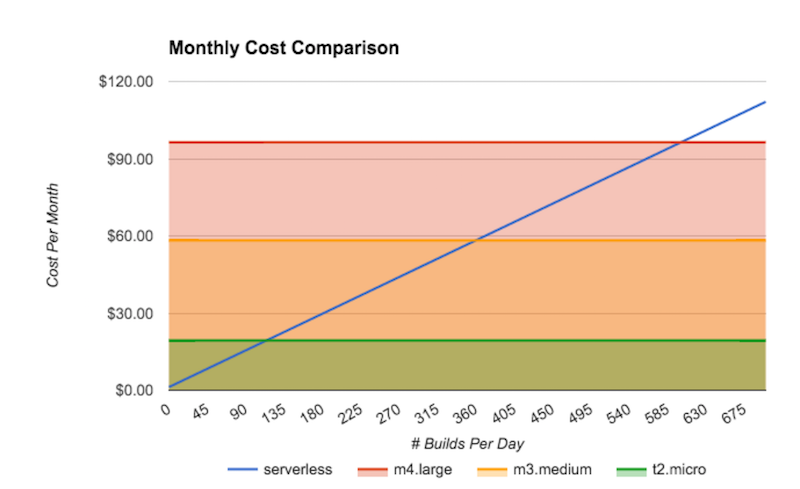 in conclusion, running a continuous delivery pipeline with codepipeline + lambda is very attractive based on the cost efficiency of utility pricing, the simplicity of using a managed services environment, and the tech stack parity of using node.js for both the application and the pipeline.

next week, we will dive into part two of this series, looking at what changes need to be made for an express application to run in lambda and the cloudformation templates needed to create a serverless delivery pipeline. finally, we will conclude with part three going into the details of each stage of the pipeline and the lambda functions that support them.