In serverless and containers, we have two amazing technologies that provide productive, machine-agnostic abstractions for engineers to work with. And yet, there seems to be an unbridgeable chasm between the two camps.

If you have read anything I wrote in the last two years, you know that I am firmly in the serverless camp. But I was also an early adopter of containers. My first containerization project came in early 2015, shortly after Docker reached the 1.0 milestone.

This post is not another attempt at stoking the fire in the ongoing tribal warfare or to proclaim victory for either camp. Instead, I will attempt to take an objective look at the state of serverless and containers, the tradeoffs they offer and give my honest view on what the future holds.

Given that serverless and function-as-a-service (FAAS) are often used interchangeably already, for the purpose of this article I will restrict the definition of serverless to mean FAAS offerings such as AWS Lambda.

Things have come a long way since the early days of Docker. A rich ecosystem of tools has spawned up to meet our needs as we run increasingly complex systems on containers. 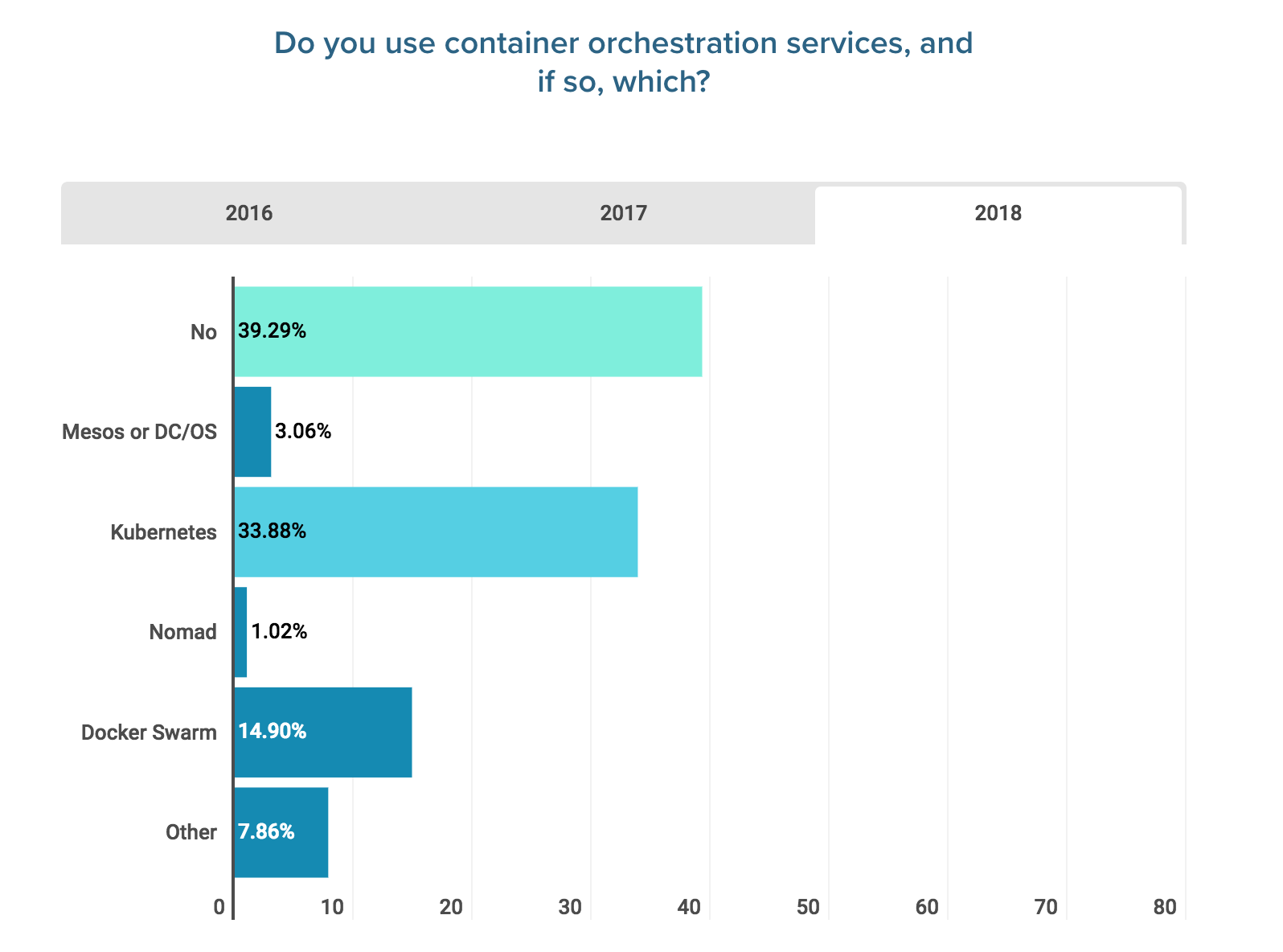 AWS also has its own managed container service, ECS. Which provides tighter integration with the rest of the AWS ecosystem.

Service meshes such as and are also gaining visibility and adoption. They move common cross-cutting concerns such as tracing and circuit breakers out of the application layer. By addressing these concerns in the infrastructure layer, they provide a language and runtime agnostic solution to these challenges. This makes them a great fit for the modern IT organization, that is building microservices using a variety of different languages.

Whilst the hype around serverless has not been around for as long as containers. It's worth remembering that AWS Lambda was announced at re:invent 2014, only a month after Docker reached 1.0. It shipped with basic logging and monitoring support with CloudWatch, even though many of the event sources we now rely on, such as API Gateway, were introduced afterwards.

Aside from these managed services, there are also solutions that let you run serverless on your own Kubernetes cluster. These include the likes of and the newly announced from Google and co. Whilst it's great that these solutions are attempting to meet many developers where they are, I can't help but feel that they forfeit the best thing about serverless-not having to worry about servers! 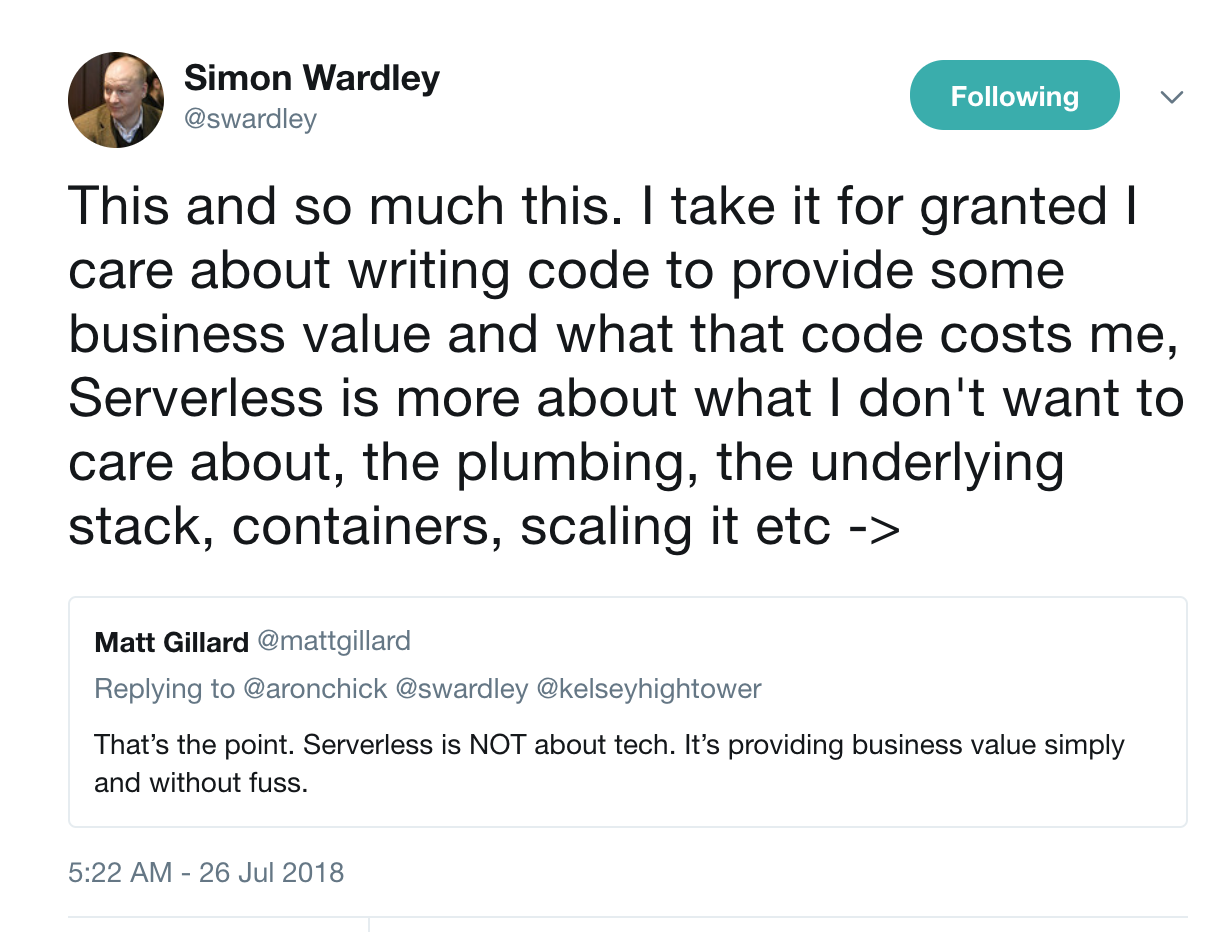 Adoption for both serverless and containers are growing at a rapid rate, according to several surveys and studies. Here are some of the highlights I picked out.

Interestingly, the DevOps Pulse survey reports a much smaller increase in serverless adoption than other reports. Up from 30.55% (2017) to 42.58% in 2018. This is perhaps correlated with the distribution of its correspondents. Where 28.54% identified themselves as developers vs. 44.26% that identified as DevOps, DevSecOps, SysAdmin, or SRE.

Debate about serverless vs. containers often starts with control, or the lack thereof in the case of serverless. This is not new. In fact, I clearly remember the same debates around control when AWS was starting to gain traction way back in 2009. Now 10 years later, the dust has settled on that original debate but we have failed to learn our lesson.

It's human nature to want control, but how much are you willing to pay for it? Do you know the total cost of ownership (TCO) you will take on?

The ability to control your own infrastructure comes with a lot of responsibilities. To take on these responsibilities, you need to have the relevant skill sets in your organization. That means salaries (easily the biggest expense in most organizations), agency fees, and taking time away from your engineers and managers for recruitment and onboarding.

Given the TCO involved, the goal of having that control has to be to optimize for something (for example, to achieve predictable performance for a business critical workflow), and not having control for its own sake.

It takes significant engineering know-how and investment to build a container-based, general purpose compute platform that is as efficient, scalable, and resilient as a serverless offering such as AWS Lambda. Most organizations are simply not equipped to pull this off. I have known a few large enterprises that have failed miserably in their attempts, despite vast investments of time and money. 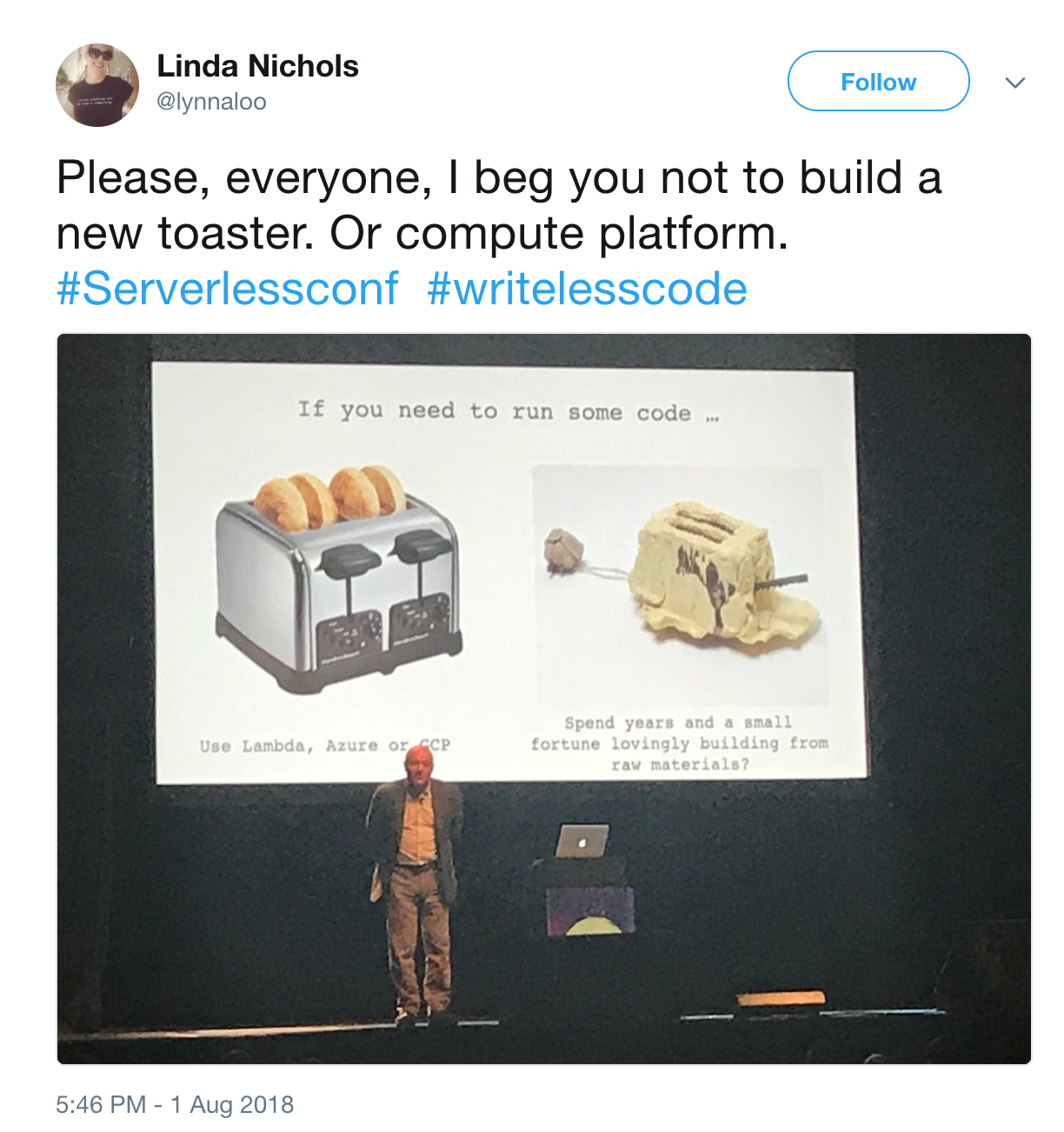 With serverless, you get the basic observability tools out of the box-logging, metrics, and tracing. Although there are caveats with these, they are generally sufficient as you start out.

Vendors who have traditionally catered for the IAAS or container market are starting to offer support for serverless applications as well. However, they need to adapt their approach as the agent-based approach is no longer possible with serverless.

There is also a growing number of vendors who are focused on solving observability and security problems for serverless applications. However, most are still in the early stages of development and are not yet ready for serious production use.

Compared to serverless, the container space has a more mature and diverse ecosystem of tools. In fact, one of the challenges I find working with containers is to deal with the overwhelming number of choices!

With ample opportunity for tinkering, I also find that teams can lose sight of the prize (i.e. building a better product for our customers) and fall into the trap of over-engineering.

Tooling support for serverless is getting better all the time, but for the time being at least, we are still a long way behind containers. The challenge for those working in the container space is to fight the urge to tinker and strive for simplicity.

Detractors of serverless often use vendor lock-in as their argument. At the same time, most AWS customers are actually asking for tighter integration so they can extract even more value from the platform.

Vendor lock-in is a risk, sure. But as any investor will tell you, you'd never make any money if you don't take on risks. The trick is to take calculated risks that give you the best return.

For all the attention that it has received, vendor lock-in is a danger that has come to pass for a precious few. Instead, you are far more likely to find over-engineered solutions to prevent vendor lock-in that instead create other forms of lock-in, be it with internal teams or with other private cloud vendors.

Again, this is not new. We had this same debate with ORMs years ago. We created all these abstractions to prevent vendor lock-in, except the risk never materialized into problems for most of us. All that happened was that we spent a lot of energy and time upfront, and delayed our time-to-market, for something that never became a problem.

Worse yet, ORMs introduced their own problems and complexities and hindered development on an ongoing basis. It became a tax on the development team, and slowed down feature delivery for the foreseeable future.

For those that did have to do database migrations, ORMs didn't make things much better. It was just another problem that you had to deal with, on top of everything else.

It's painful to see history repeating itself, this time, at an even higher level that can impact the entire organization!

Companies are finding that serverless teams are getting more done, and with fewer engineers. So, like a wise investor, the question we should be asking is: "Are the significant productivity returns worth the lock-in risk, which has a small chance of materializing into actual problems?"

Is the Future Serverless or Containers?

Serverless gives you a lot of productivity gains, at the expense of control over your infrastructure.

For a lot of our workflows-web APIs, stream processing, cron jobs, etc.-we don't need all that control and it's actually a blessing that someone else can take care of the plumbing for us.

But there will always be cases where we need to retain control of our infrastructure in order to optimize for performance, cost, or higher availability. Or perhaps our workload does not bode well with current limitations with serverless such as maximum execution time.

Instead of choosing one or the other, I believe serverless and containers should be used side by side. Indeed, many companies have found success with a hybrid approach.

This is also the advice from none other than Adrian Cockcroft, former cloud architect at Netflix and currently VP of Cloud Strategy at AWS. 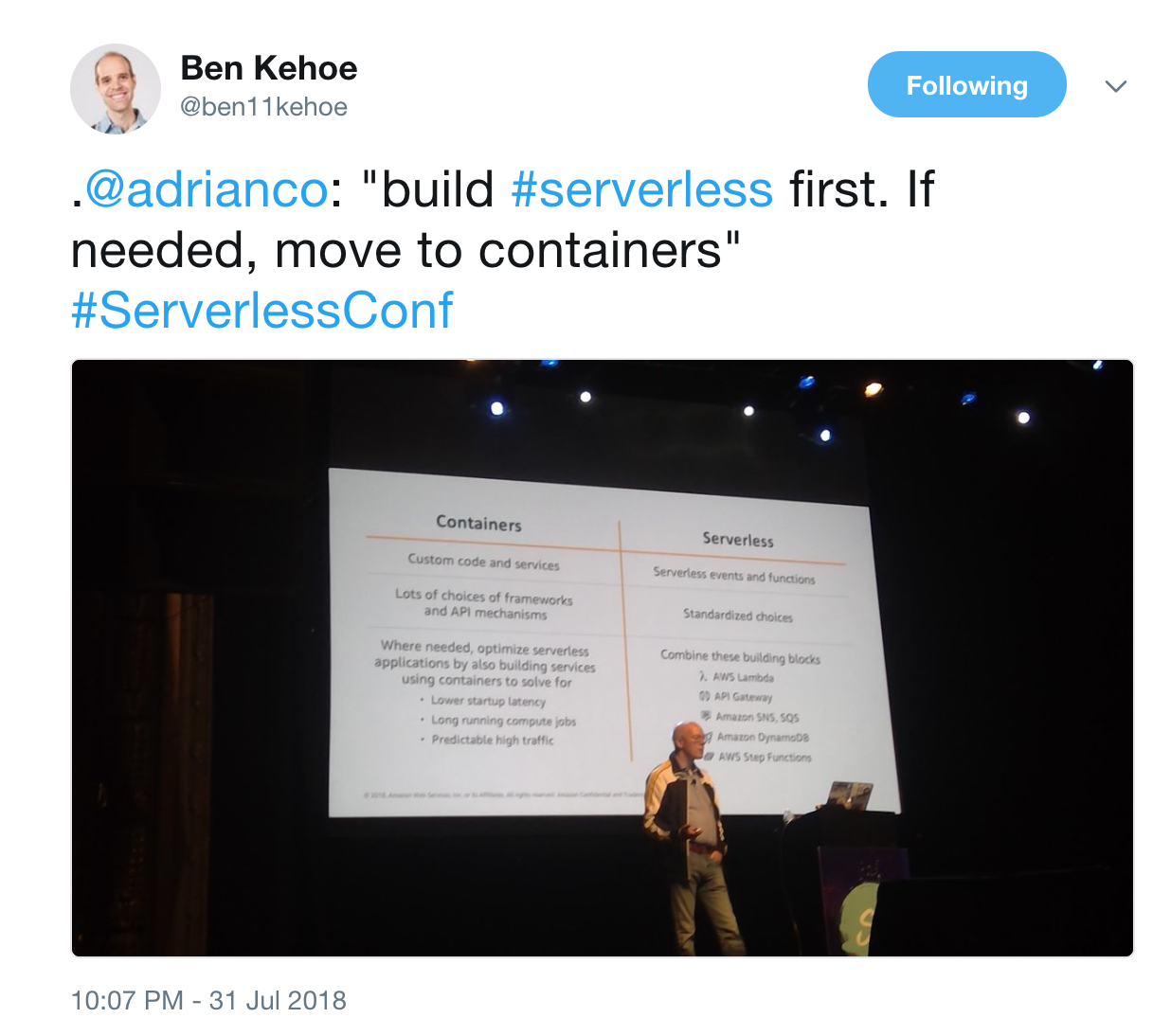 I believe we will eventually see a convergence of the two paradigms. Container technologies will eventually become serverless-think Fargate, plus per-invocation pricing model and millisecond billing. At the same time, serverless platforms would open up and allow you to bring your own containers. Advanced users would be able to retain some control of their infrastructure by providing API-compliant subcomponents for logging, etc.

And with the line between containers and serverless finally broken down, we can finally do away with the factions and stop talking about the underlying technologies. All I want to talk about is how to build products that my customers want to use, and how I can build them faster.

Let's talk about that!