The first part of the article is available here.

To go through all demo steps you need Git, Docker, and Java version 8+ installed on your machine. You can find instructions on how to do it below: 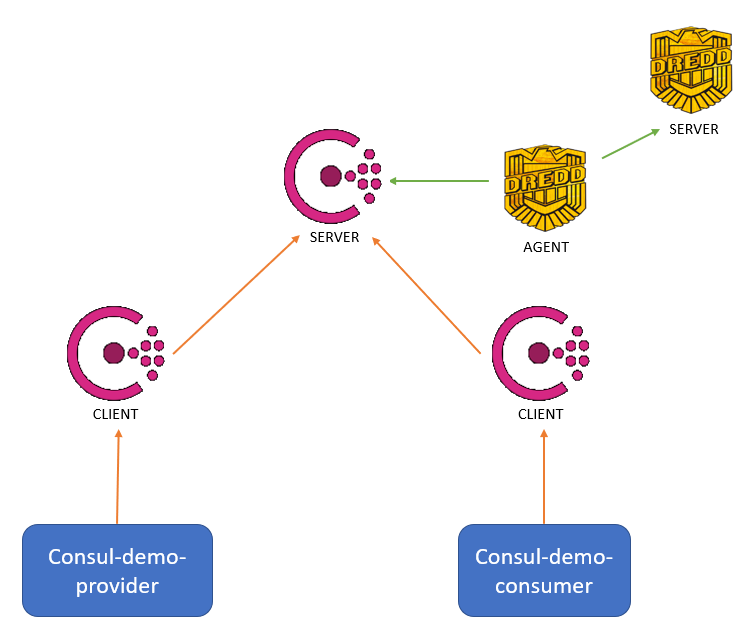 To set up the Consul cluster locally official Consul Docker image is used. It allows running Consul as server or client depending on starting parameters.

To do that let's dive into your favorite console and call the Docker command:

Once the network is created, let's run the Consul server:

consul-server will be available at 8500 port from your local machine. The Consul server is started with the following arguments:

After the Consul server is running you can see the UI at the link below:

It may be a little bit different depending on the Consul version.

For now, there is only one service in our Consul cluster and it is the Consul server we just ran.

To run consul in client mode call the followings commands:

Consul client will run on the 8501 port on your local machine; -join parameter means that client will try to connect to the server with a given IP address. You can find this address in the UI or you can check it with Docker by inspecting previously created Docker network:

Please note the port is changed from 8501 to 8502 and the name of the node being changed from client-1 to client-2.

After that step, the Consul cluster is ready. Please note that both Consul clients appeared in the cluster.

To set up Judge-d locally we will also use Docker.

By setting the SPRING_PROFILES_ACTIVE environment variable to dev value we will run the Judge-d server in the dev profile. In this profile, an in-memory h2 database is used, which is convenient for demo purposes.

To verify that server is running You can check the Swagger documentation page:

You should see the screen as below: 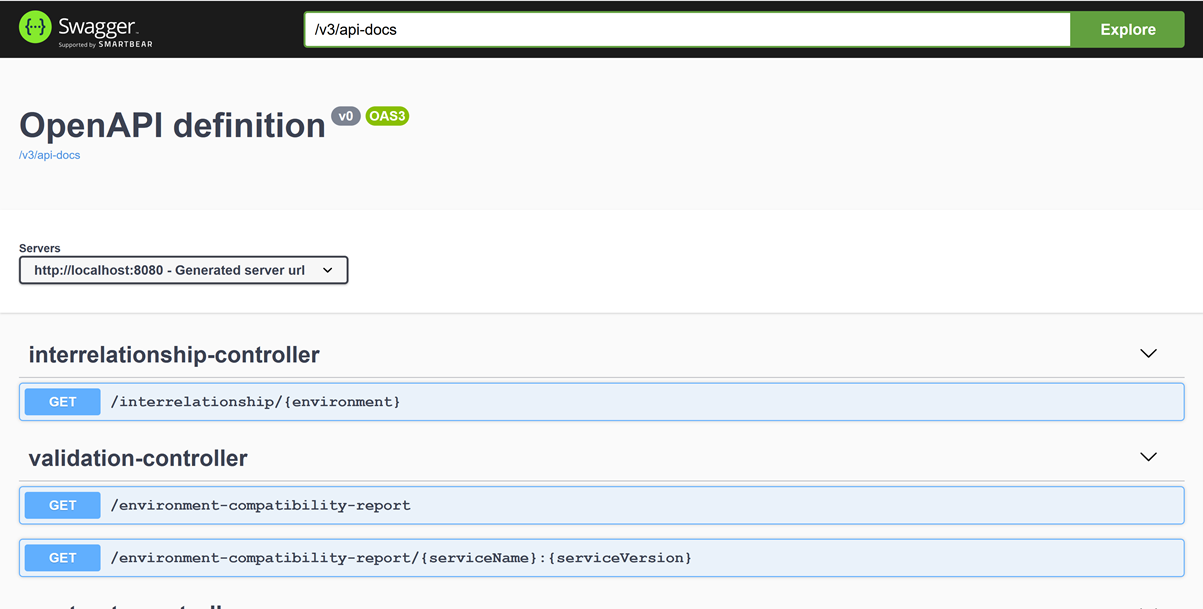 The next step is to set up a Judge-d agent in the Consul profile that will use the previously created Consul cluster to fetch data about running services. One of the required arguments that need to be passed during Judge-d agent startup is the name of the environment to be managed by this agent so first, let's create a test environment called 'consul' in the Judge-d server. You can do it by sending an HTTP PUT request to the Judge-d server API /environments/{environmentName}. You can either use Curl directly or send the request using Swagger UI.

When the environment was created, we can run Judge-d agent using:

Moreover, SPRING_PROFILES_ACTIVE=consul environment variable needs to be set to use Consul cluster as a source of data about services and CONSUL_HOST environment variable with address of existing Consul server to manage. When judge-d-agent is up and running you can call to list all running Docker containers:

The output should be similar to:

The last step is to set up the consumer and the provider. Source code is available on GitHub.

You have to clone this repository to your machine.

The project contains two Gradle modules with the provider and the consumer.

Firstly we generate and publish contracts to the Judge-d server for both of them. Typically contract generation and contract testing, in general, are part of continuous integration, but for the sake of simplicity in our demo, we will do it manually.

Let's start with the provider. Firstly, we need to generate a swagger.json file that contains the capabilities of the provider. We achieve that by launching provided integration test from ProviderApplicationTests class. The test can be run through the Gradle command: 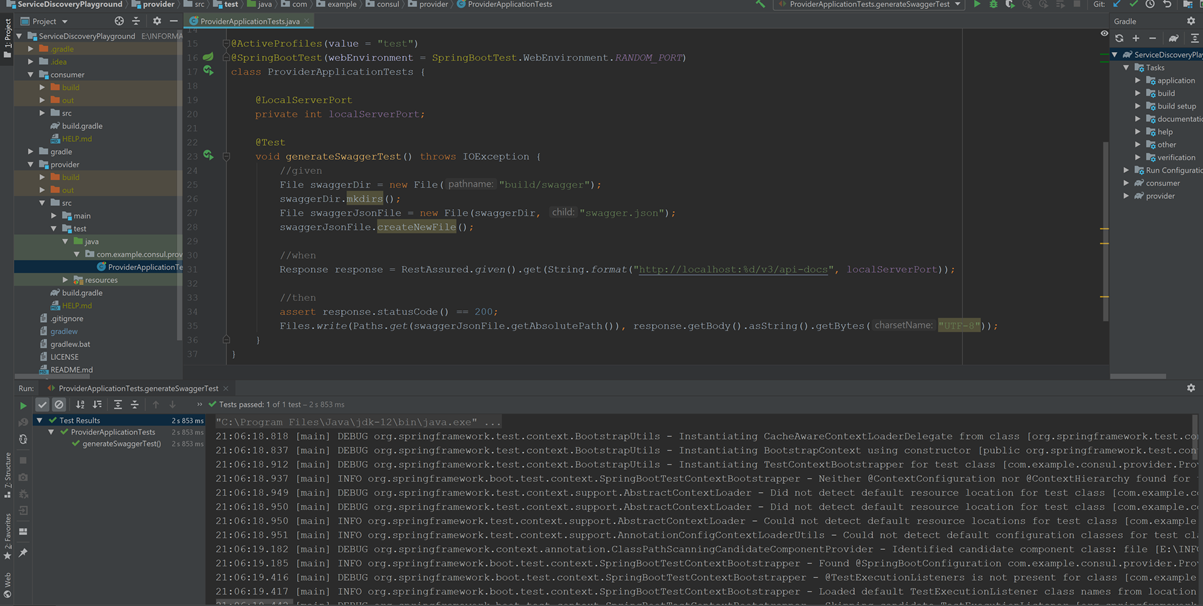 swagger.json file will be generated in "build/swagger" path after the test is run. The next step is to publish the capabilities to the Judge-d server using Gradle publishContracts task of the gradle-contract-publisher plugin as below:

We should see the output similar to below:

We can verify that the contract is registered in Judge-d server by calling: 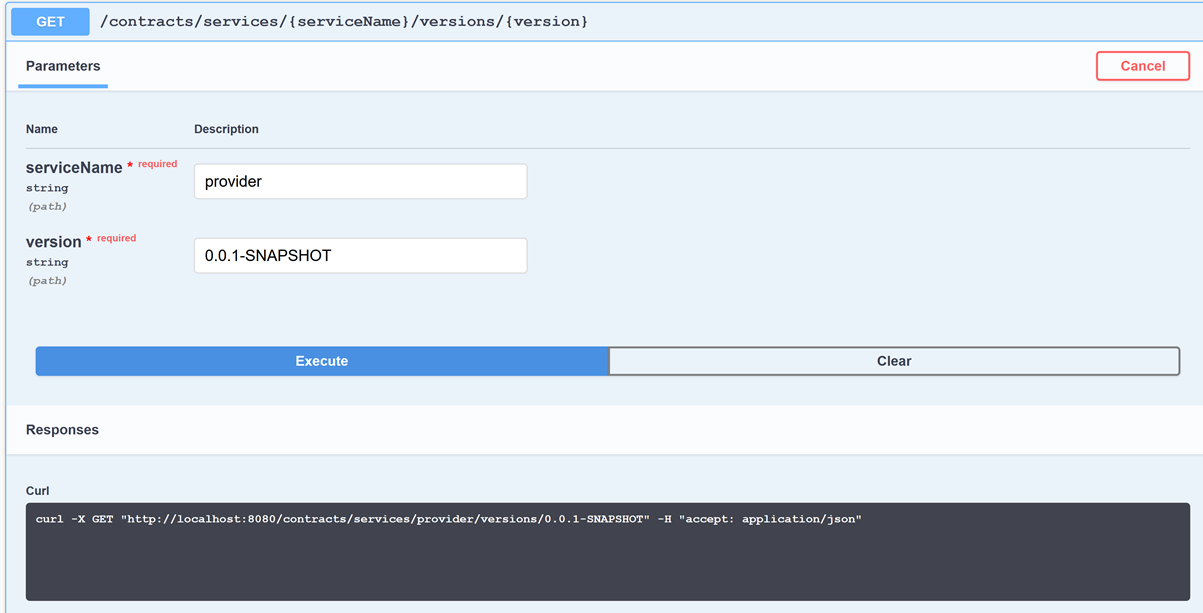 As a response to the request, we should get JSON containing Swagger generated for the provider in the previous steps.

Now it is time to generate and publish a Pact file with consumer expectations. To do that, we need to run the test from ConsumerApplicationTests.class to generate the pact file. 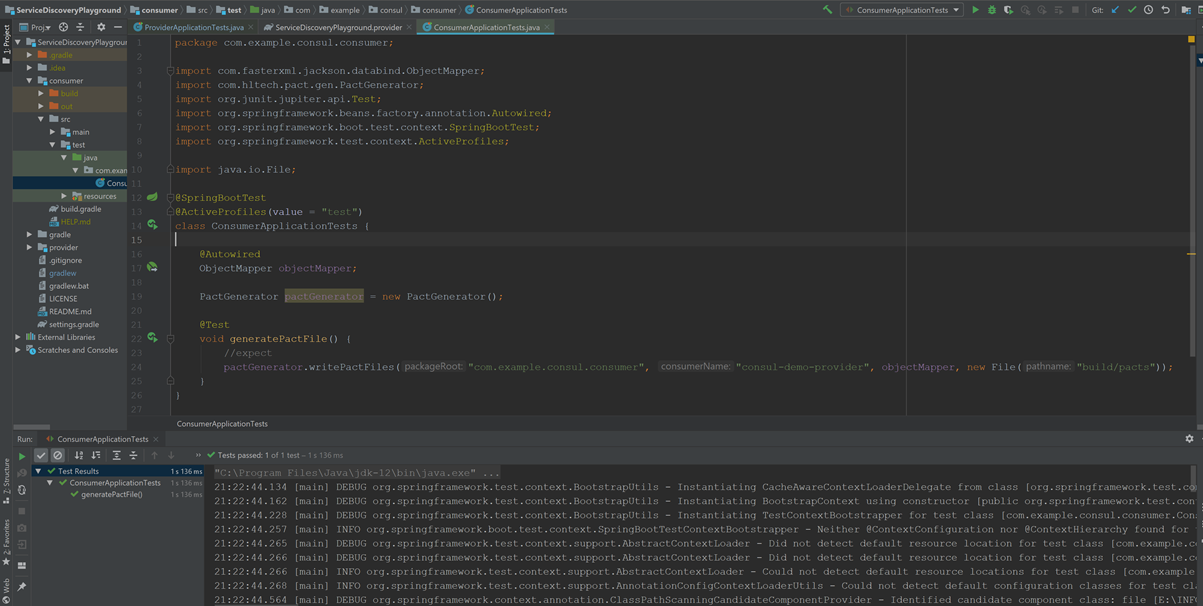 Subsequently, we will publish the Pact file using the judge-d-contract-publisher Gradle plugin similar as for provider service:

judgeDLocation — URL of judge-d instance to which your contracts will be uploaded.

expectations — list of comma-separated values which determine expectations of your service against providers.

pactsLocation — required for rest expectation, points to the directory where pacts files are stored.

Now, when contracts are published to Judge-d, we are ready to run the consumer and the provider. Both of them use Spring Cloud Consul library to register automatically during startup to the previously created Consul cluster. First, let's start the provider.

To run provider through Gradle:

It has been registered in Consul as seen in logs. When the provider is up and running we proceed with the customer.

To run consumer through Gradle:

We can make sure that both services are running and have been successfully registered in Consul UI.

We can see that both the consumer and provider are registered and are up and running. Please note that both services need to have a tag with version Judge-d to validate contracts. When a version tag is missing, the Judge-d agent skips this service.

Now we can use Judge-d server API to see that environment with the name 'consul' was updated using information obtained by Judge-d from the Consul. 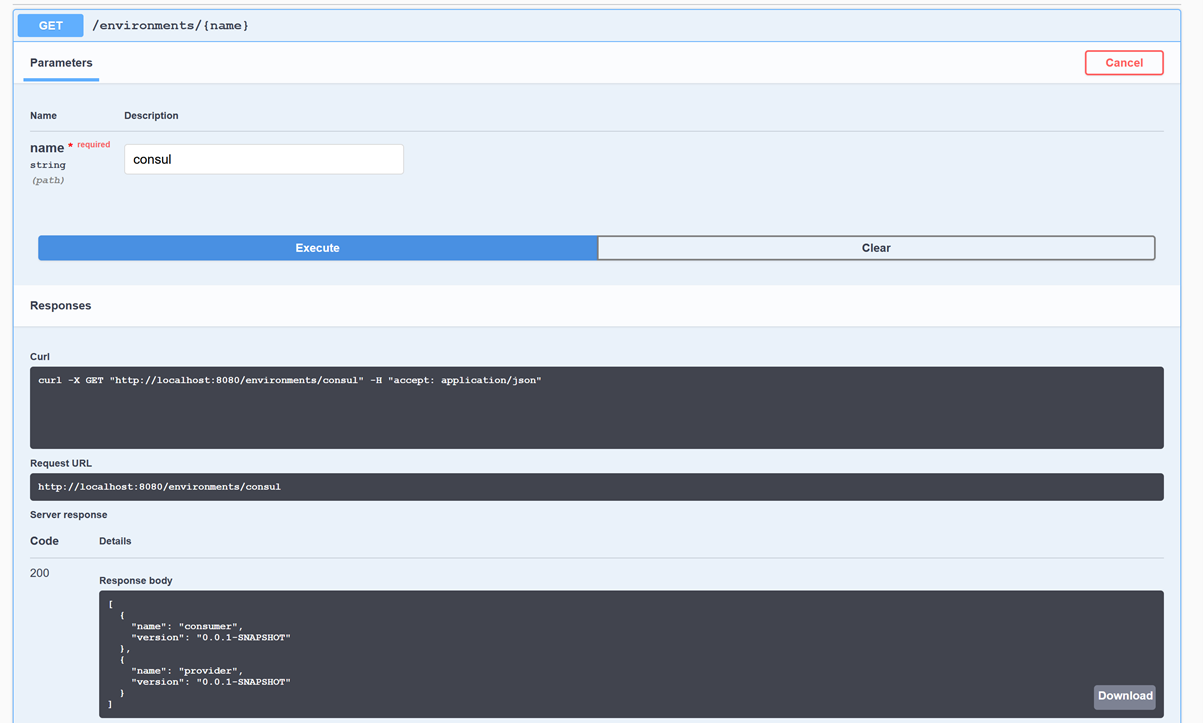 Moreover, we can get a compatibility report for this environment. 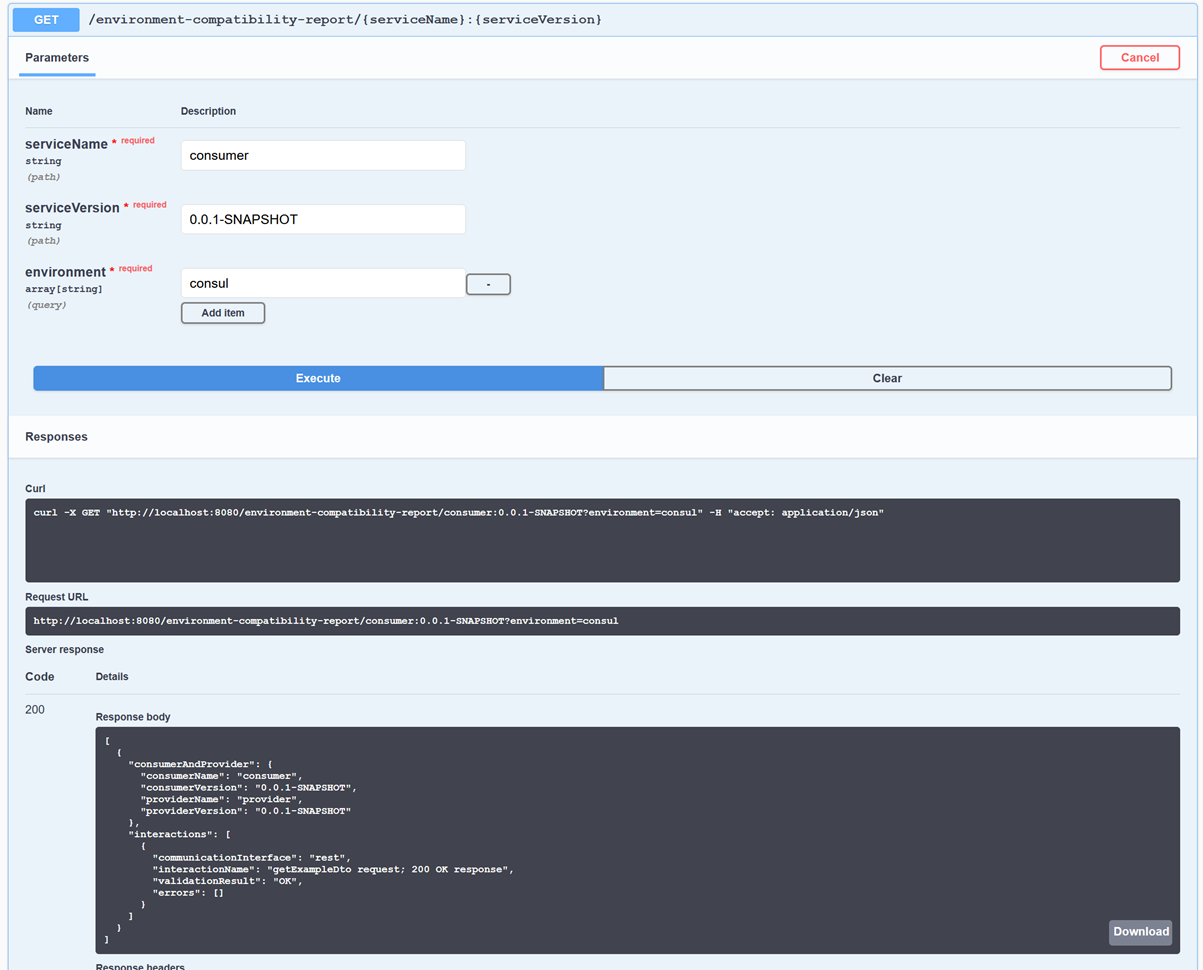 We see that contract's verification passed. 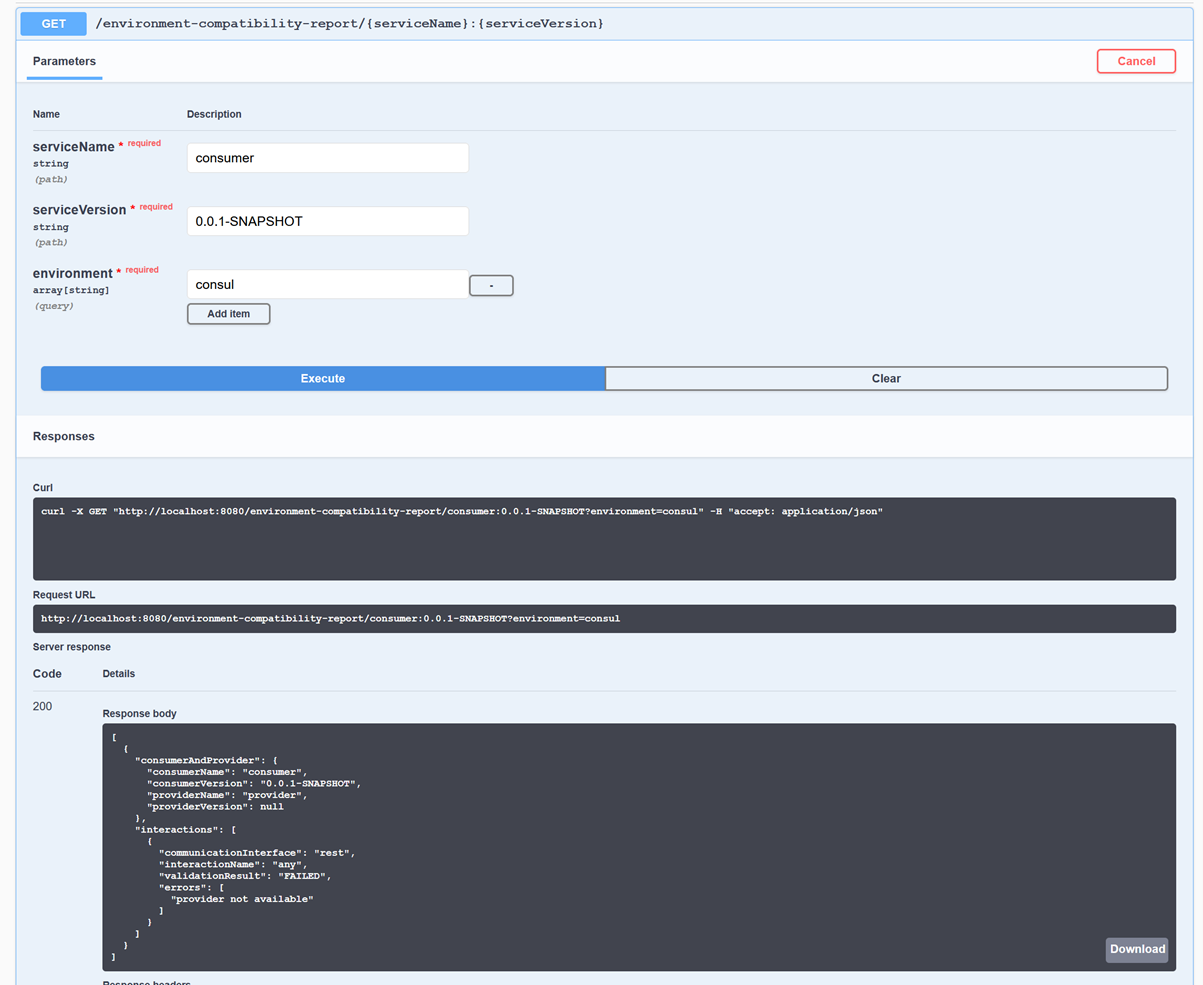 We can see now that the contract's verification failed because the provider is no longer available. The absence of the provider was detected by Judge-d agent basing on the information that the provider's health check done by Consul was failed.

This concludes the demo part of the article.