I created a data model to store railroad systems, services, scheduled, time points, and related information, detailing the schema "Beyond CRUD n' Cruft Data-Modeling" with a few tweaks. The original I'd created for Apache Cassandra, and have since switched to Postgres giving the option of primary and foreign keys, relations, and the related connections for the model.

In this post I'll use that schema to build out infrastructure as a code solution with Terraform, utilizing Postgres and Hasura (OSS).

For the Docker Compose file, I just placed them in the root of the repository. Add a docker-compose.YAML file and then added services. The first service I set up was the Postgres/PostgreSQL database. This is using the standard Postgres image on Docker Hub. I opted for version 12, I do want it to always restart if it gets shut down or crashes, and then the last of the obvious settings is the port which maps from 5432 to 5432.

For the volume, since I might want to backup or tinker with the volume, I put the db_data location set to my Codez directory. All my databases I tend to set up like this in case I need to debug things locally.

For the db_data volume, toward the bottom, I add the key-value setting to reference it.

Next, I added the GraphQL solution with Hasura. The image for the v1.1.0 probably needs to be updated (I believe we're on version 1.3.x now) so I'll do that soon, but got the example working with v1.1.0. Next, I've got the ports mapped to open 8080 to 8080. Next, this service will depend on the Postgres service already detailed. Restart is also set on always just as the Postgres service. Finally two environment variables for the container:

At this point, the commands to start this are relatively minimal, but despite that, I like to create a start and stop shell script. My start script and stop script simply look like this:

For the first execution of the services, you may want to skip the -d and instead watch the startup just to become familiar with the events and connections as they start.

That's it for the basic development environment, we're launched and ready for development. With the services started, navigate to https://localhost:8080/console to start working with the user interface, which I'll have more details on the "Beyond CRUD n' Cruft Data-Modeling" swap to Hasura and Postgres in an upcoming blog post.

For the production deployment of this stack I want to deploy to Azure, use Terraform for infrastructure as code, and the Azure database service for Postgres while running Hasura for my API GraphQL tier.

For the Terraform files, I created a folder and added a main.tf file. I always create a folder to work in, generally, to keep the state files and initial prototyping of the infrastructure in a singular place. Eventually, I'll set up a location to store the state and fully automate the process through a continuous integration (CI) and continuous delivery (CD) process. For now, though, just a singular folder to keep it all in.

For this I know I'll need a few variables and add those to the file. These are variables that I'll use to provide values to multiple resources in the Terraform templating.

One other variable I'll want so that it is a little easier to verify what my Hasura connection information is will look like this.

Let's take this one apart a bit. There is a lot of concatenated and interpolated variables being wedged together here. This is the Postgres connection string that Hasura will need to make a connection. It includes the username and password, and all of the pertinent parsed and string escaped values. Note specifically the %40 between the ${var.username} and ${azurerm_postgresql_server.logisticsserver.name} variables while elsewhere certain characters are not escaped, such as the @ sign. When constructing this connection string, it is very important to be prescient of all these specific values being connected. But, I did the work for you so it's a pretty easy copy and paste now!

Note that there is a features an array that is just empty, it is now required for the provider to designate this even if the array is empty.

Next up is the resource group that everything will be deployed to.

Now the Postgres Server itself. Note the location and resource_group_name simply map back to the resource group. Another thing I found a little confusing, as I wasn't sure if it was a Terraform name or resource name tag or the server name itself, is the "name" key-value pair in this resource. It is however the server name, which I've assigned var.server. The next value assigned "B_Gen5_2" is the Azure designator, which is a bit cryptic. More on that in a future post.

After that information the storage is set to, I believe if I RTFM'ed correctly to 5 gigs of storage. For what I'm doing this will be fine. The backup is set up for 7 days of retention. This means I'll be able to fall back to a backup from any of the last seven days, but after 7 days the backups are rolled and the last day is deleted to make space for the newest backup.

The geo_redundant_backup_enabled setting is set to false because with Postgres' excellent reliability and my desire to not pay for that extra reliability insurance, I don't need geographic redundancy. Last I set auto_grow_enabled to true, albeit I do need to determine the exact flow of logic this takes for this particular implementation and deployment of Postgres.

Since the database server is all set up, now I can confidently add an actual database to that database. Here the resource_group_name pulls from the resource group resource and the server_name pulls from the server resource. The name, being the database name itself, I derive from a variable too. Then the character set is UTF8 and collation is set to US English, which is generally standard settings on Postgres being installed for use within the US.

The next thing I discovered, after some trial and error and a good bit of searching, is the Postgres specific firewall rule. It appears this is related to the Postgres service in Azure specifically, as for several trials and many errors I attempted to use the standard available firewalls and firewall rules that are available in virtual networks. My understanding now is that the Postgres Servers exist outside of that paradigm and by relation to that have their own firewall rules.

This firewall rule attaches the firewall to the resource group, then the server itself, and allows internal access between the Postgres Server and the Hasura instance.

The last and final step is setting up the Hasura instance to work with the Postgres Server and the designated database now available.

To set up the Hasura instance I decided to go with the container service that Azure has. It provides a relatively inexpensive, easier to set up, and more concise way to set up the server than setting up an entire VM or full Kubernetes environment just to run a singular instance.

The first section sets up a public IP address, which of course I'll need to change as the application is developed and I'll need to provide an actual secured front end. But for now, to prove the deployment, I've left it public, setup the DNS label, and set the OS type.

In the next section in this resource, I then outline the container details. The name of the container can be pretty much whatever you want it to be, it's your designator. The image however is specifically hasura/graphql-engine. I've set the CPU and memory pretty low, at 0.5 and 1.5 respectively as I don't suspect I'll need a ton of horsepower just to test things out.

Next, I set the port available to port 80. Then the environment variables HASURA_GRAPHQL_SERVER_PORT and HASURA_GRAPHQL_ENABLE_CONSOLE to that port to display the console there. Then finally that wild concatenated interpolated connection string that I have set up as an output variable - again specifically for testing - HASURA_GRAPHQL_DATABASE_URL.

To run this, similarly to how I set up the dev environment, I've set up a startup and shutdown script. The startup script named prod-start.sh has the following commands. Note the $PUSERNAME and $PPASSWORD are derived from environment variables, whereas the other two values are just inline.

Executing that script gives me results that, if everything goes right, looks similar to this.

Do note that this process will take a different amount of time and is completely normal for it to take ~3 or more minutes. Once the server is done in the build process a lot of the other activities start to take place very quickly. Once it's all done, toward the end of the output I get my hasura_url output variable so that I can confirm that it is indeed put together correctly! Now that this is preformed I can take the next steps and remove that output variable, start to tighten security, and other steps. I'll detail in a future blog post once more of the application is built.

Now if I navigate over to logisticsdatalayer.westus2.azurecontainer.io I can view the Hasura console! But where in the world is this fully qualified domain name (FQDN)? Well, the quickest way to find it is to navigate to the Azure portal and take a look at the details page of the container itself. In the upper right, the FQDN is available as well as the IP that has been assigned to the container! 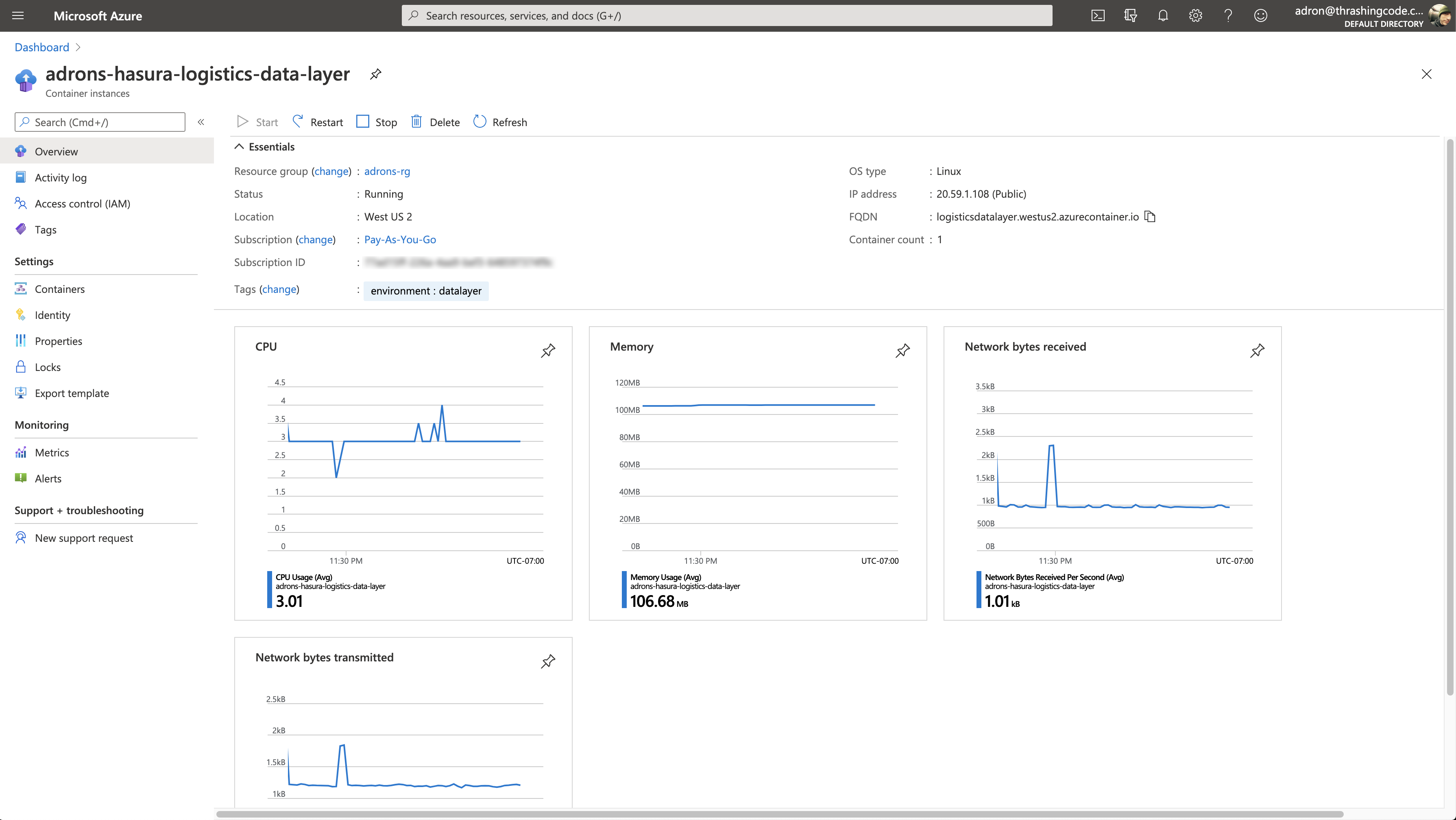 Navigating to that FQDN URI will bring up the Hasura console!

From here I'll take up the next steps in a subsequent post. I'll get the container secured, map the user interface or CLI, or whatever the application is that I build lined up to the API endpoints, and more!