Let me preface this post by saying this: I get Story Points, I understand how they work, how they should be used and the problem that they are purported to solve.


Here's the thing, I'm a minimalist at heart. My first (and typically second and third inclination) whenever I learn something new is to strip it down to it's minimal working moving parts (there's an acronym in there somewhere). With story points it seems that the industry has reached a solution without fully understanding the problem.
Q: So what's the problem?
A: Detailed estimates are always wrong. Will always be wrong and can never be accurate except by pure luck.
Q: Why are detailed estimates always wrong?
A: Because the real world is a complicated place and it's impossible to see clearly into the future. 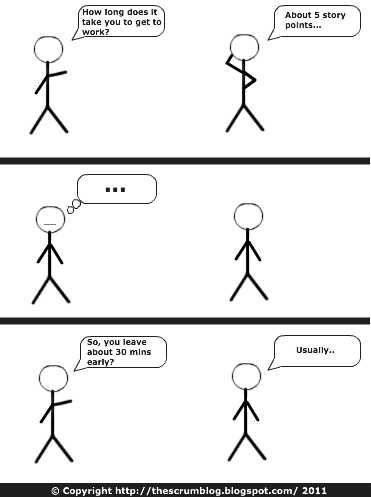 But the abstraction introduces a new problem. Allow me to illustrate with a couple questions.
Since blogging is a bit of a one way conversation until it's published let me fill in some of your answers.
So when we look at it objectively, we're actually fooling ourselves by pretending we're not estimating with real time units.
Now in some cases this is a good thing, it's a bit like Mom mashing some cauliflower into the mashed potatoes so we'll eat some real vegetables but I don't see it as something to default to or even a permanent solution to the estimates problem.
So what's the real solution? Combine the best of both worlds.
Estimating in logical time boxes.
Instead of estimating in units of measurements, we estimate in predetermined timeboxes.
A slight tweak should only take a couple of minutes? That falls into the 1 hour timebox. A bugfix should take me the better part of a day? That'll fall into the 1 day time box. What time boxes should your team use? Probably not fibonacci numbers since they'll imply some level of precision which shouldn't be there and tshirt sizes are missing the point of estimating in time as well. The answer is that you should decide with your team but, here are some good ones to start with:
At some threshold with these you'll want to decide to split the backlog item into more manageable chunks and you'll want to estimate with the assumption of one person working on an item from beginning to end. In practice there may be multiple hands on that item at any given time but we want to capture total time expended not calendar dates in progress.
So what've we learned? A lot actually.
Let me know what you think in the comments.
teams Sprint (software development) dev