Join For Free
Amanda Laucher recently queried the twitterverse on the topic of team size. 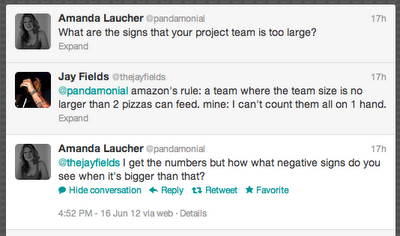 In my opinion, my last project team was "too large". This blog entry will focus on the things that happened that drove me to that conclusion.

note: I was the only person on the team who believed it was too large. The rest of the team thought we 'might' be too large, and the cost of making a change was greater than the pain of remaining 'potentially' too large. Since I was the minority, it's safe to assume that my opinion is controversial at a minimum.

In many ways my last project was a very, very well funded start-up. We started small, with 3 developers; however, as the scope of our problem grew so went the size of our team. When the team had reached 7 (5 developers in one office and 2 in another), I began to advocate for a team split. By the time we reached 10 total, I was positive that a split was appropriate. As I stated, we were in start-up mode. I wanted to deliver as fast as possible and I felt that several factors were impacting our ability to produce.

Camps. Technology choices originally drove my desire to split the team. The project had speed requirements that forced the use of Java for some portions of our solution; however, other portions of the codebase could have been written using Java, Clojure, or even Ruby. I held the opinion that anything that could be written in Clojure should be written in Clojure. I felt faster writing code in Clojure (vs Java) and I wanted to deliver as fast as I possibly could. Two of my colleagues agreed with my opinion, 2 abstained, and 2 strongly disagreed with me. The two that disagreed with me thought it was easier to write everything in one language, using one toolset. I completely see their point of view, and acknowledge all of their opinions. They are not wrong, we just have incompatible opinions on software.

I need to be clear here, these were good developers. It would have been easy if they were inferior developers - we would have improved their skills or found them a new home. However, that wasn't the case. These were guys that consistently delivered as much, if not more value than I did - they just wanted to get things done is a way that clashed with my approach. The team was more or less split into 2 camps - pro Clojure and pro Java.

Countless hours were spent discussing how to deal with this difference of opinions. Retrospectives were often composed of 2 types of problems: Problems that we all agreed on and solved, and problems that we would never agree on and never solved. The 2nd types of problems appeared at every retrospective and always led to the same interaction. This situation infuriated me, but, realistically, there was never going to be a solution that made the entire team happy. Everything that was written in Clojure annoyed the pro Java camp, and anything that wasn't performance sensitive and was written in Java annoyed the pro Clojure camp. I naively believed that the pro Java guys would "see the light", and tried everything I could think of to convince them that Clojure was the right choice - and it was for me, but it (likely) never will be for them. In the end, I decided that advocating Clojure was a waste of time and focused my efforts on getting the team split by compatible opinions.

I think your points about non-compatible opinions on a team, in the saddest case, can occur on a team of two. Do you suppose two distinct camps (as opposed to a bickering mob) become more likely as team size grows?

I do believe it is more likely that camps occur as the team sizes grow. I believe disagreements are healthy; however, camps are counterproductive - due to too much time spent in arbitration. I do agree that you can have camps on a team size two, and it's possible to have no camps on a team of size 10 - which is why I don't think size X will guarantee camps, but that if you have camps then X might be too many.

If your team has camps with incompatible (yet, perfectly valid) opinions then it's a sign that it's possibly too big, or it has members that would be more effectively used if swapped with someone else in the organization that holds compatible opinions. Or, more precisely, if you have camps (where camp is defined as N or more people) with conflicting opinions, and you have a solution that can be split vertically or horizontally, then your team size may be "too big" - where too big is defined as "a split would likely increase the productivity of the members of both camps". It could be possible to replace X split-away members with Y new members where (Y > X) and as long as you do not have camps, the team would not be considered too big - which is why you cannot simply state that Z people on a team is 'too big'. note: N is defined as the number of people required to reasonably address bus risk. On a highly functional team with almost no turnover, N can equal 2. More often, N will be 3 or more.

Do you believe that CCO hindered the pace of delivery, or that the code base grew to a size and level of complication that made it hard to own collectively?

Definitely the latter. Our problem had grown to a size that caused CCO to go from a positive impact to a negative one. This was not due to a flaw in CCO, this was due to applying CCO to a situation where it was no longer the most effective choice.

The problem we were solving had 3rd party, distributed system, compliance, extreme performance, and algorithmic concerns that all needed attention. On the surface it didn't seem like a tough problem to solve, and yet, not a single member of the best team I've ever worked on could explain the entire problem. In short, it wasn't just complicated, it was deceptively complicated - which made matters worse. The problem was large, and we attempted to tackle it (clearly, not intentionally) by building a team that was too large.

After a year of practicing Collective Code Ownership I found that most areas of the codebase would have a primary person who deeply understood it's purpose, and almost everyone else knew very, very little about it. Those with shallow knowledge could successfully edit a method, but a change of greater size would require pairing with the primary person. The problem was large, and we were spread too thin.

If your team is so large that working in every area of the codebase results in shallow knowledge of over 40% of your codebase, that might be a sign that you could benefit from splitting the team into smaller groups with more specific responsibilities.

And, just in case you are wondering, pairing isn't the solution to having a team that is too big.