The Cache-Control header was added in HTTP 1.1 as a much needed improvement over theExpires header available in HTTP 1.0. RESTful web services can make use of this header in order to scale their applications and make them more efficient e.g. if you can cache a response of a previous request, then you obviously need not make the same request to the server again if you are certain of the fact that your cached data is not stale!

How does JAX-RS help ? 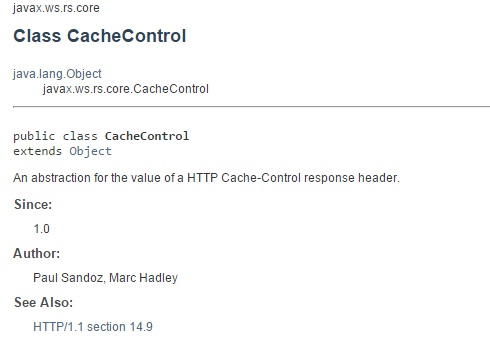 So how to I use the CacheControl class?

Just return a Response object around which you can wrap an instance of the CacheControl class.

Although this is relatively convenient for a single method, repeatedly creating and returning CacheControl objects can get irritating for multiple methods

CDI Producers to the rescue!

CDI Producers can help inject instances of classes which are not technically beans (as per the strict definition) or for classes over which you do not have control as far as decorating them with scopes and qualifiers are concerned.

The idea is to

Results of the experiment

Use NetBeans IDE to play with this example (recommended)

Although the code is simple, if you are feeling lazy, you can grab the (maven) project from here and play around