When I started thinking about using SideFX Houdini to simulate accretion, I was expecting to have my VEX skills (or lack of) pushed to their limits. However, after looking at Houdini's grains solver, I was able to come up with quite a nice looking solution with only a handful of lines of VEX.

My first grains experiment (Experimenting with Impacts) created a solid block of sand from a box. But, there's no reason why the grain source needs to be a single piece of geometry. For this project, I created a disc (a flattened tube), created points from the disc's volume and copied small spheres to each point: 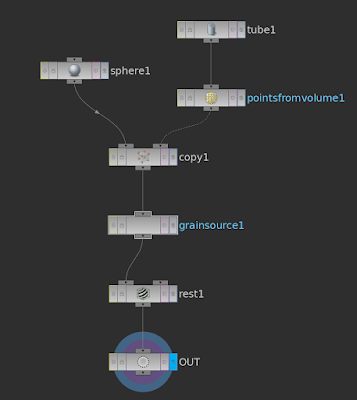 That disc-shaped array of spheres became my grain source: 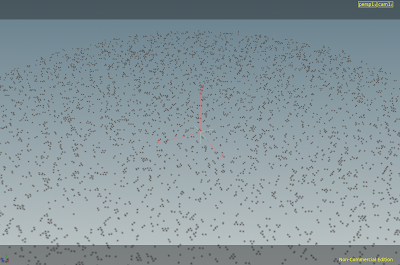 Houdini grains can be manipulated with POP forces such as drag, vortex (axis) and attract. So my DOP network has a handful of these to give the orbiting effect with a single radial gravity at the center of the system: 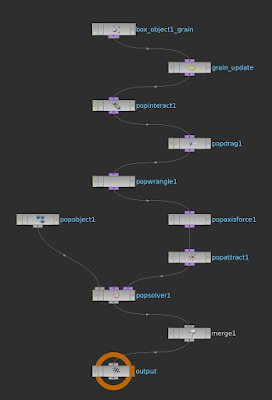 The combination of upping the clumping values in the POP Grains node and adding an attractive POP Interact node pulls the individual grains towards each other. The POP Wrangle contains a few lines of VEX to squeeze the grains into the disc shape:

The final step was to swap out the default sprite rendering used by the grains shelf tool for actual geometry. I found the end result from sprites was too flat: sprites don't cast shadows over each other. An icosahedron gave a nice look, so my grain particles geometry node ended up like this:

The particles were assigned the out-of-the box clay material and voilà, a few hours later, I was procedurally building proto-planets!

Because everything looks better with depth-of-field, here's another render:

The music (if you can call it that) was created by me using Garage Band.